More firsts, for me...the first volumes I picked up of The Best from Fantasy and Science Fiction series of anthologies, taken from the magazine Boucher co-founded in 1949 after a gestation period of some years, pulled off a rack in a second-hand store in Nashua, New Hampshire (a battered SF Book Club edition with no jacket); the first of the Dutton Best Detective Stories volumes I read, from the Nashua library, where I also found the first O. Henry Awards volume I would pick up, from the nice stacks of both series I would find (though I lived in Londonderry, NH, that town's library was tiny and run by irritable staff; Nashua's, which my father lied my way into borrowing privileges for, was the promised land by comparison). 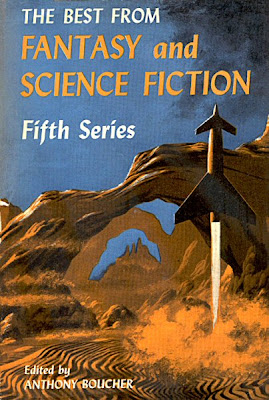 --It should be noted that "This Earth of Majesty" was a title that won a readers' contest F&SF put up, since Boucher was unsatisfied with Clarke's preferred title, "Refugee"--about the first member of the British Royal Family in space. F&SF had published it as simply "?" so as to announce the You Title It contest.

The concentration of brilliant work here is pretty croggling. Any book that includes Beaumont's "The Vanishing American," Knight's "You're Another," and the Avram Davidson (perhaps the most famous story in the book, after the Walter Miller, the first of the stories that would be reworked into the novel of the same name) and the Shirley Jackson (and what I think was P. M. Hubbard's first F&SF contribution), while also offering such happy diversions as Matheson's "Pattern for Survival" and Brown's intensely jokey vignette (a shapeshifting man/buck forcefully pursuing a doe cries, "But, my deer, think of the fawn you'll have!"), is simply waiting to blow out your doors and windows. Certainly did mine. (And it's also interesting, to me, that at least both "The Vanishing American" and "One Ordinary Day..." can be cited as not actually f or sf...but fine and close enough for only the most foolish to kick up a fuss...)

--A couple of volumes after Boucher, in his last editorial post, had assembled his last, Allen Hubin, otherwise probably best known for The Armchair Detective magazine, produces what might've been his best entry during his fine tenure with this annual. Or maybe it's just nostalgia...but, whether or not because it was the first volume I picked up, this was also a mind-blowing book, and I'm impressed by how many of these folks remain vital contributors to the crime-fiction literature, even when they themselves are no longer with us. Any anthology featuring Davidson's "The Lord of Central Park" has already proven its editor a person of sound judgment and sterling taste. (Edward Hoch would succeed Hubin as editor, for the last Dutton and the subsequent Walker volumes. The Dutton series never had particuarly elaborate covers...the Hubin, just typography on a brown cover, iirc, but there is no image I can find online for it.)

I knew Porter's work already (and it's amusing that the Fawcett paperback was quick to try to sell itself on the strength of Ship of Fools), and had heard of Pynchon, but hadn't yet read his work, before digging into this, which would be (re?-)incorporated into V. for book publication after its appearance here and in the Saul Bellow magazine it was taken from. I'm not sure why this was the first volume of the O. Henry Awards series I picked up...perhaps it was the Porter story getting the top slot, or the prevalence of Atlantic stories particularly, since I was already fond of The Atlantic Monthly (far more fond of it in those years, 1978 through the early '80s, than I am of the current inpulpation). Certainly my first encounters with Grau and Price (RIP; as with Joe Gores, a recent loss) as well, and probably one of the first with Updike.

Please see Evan Lewis's blog for more citations of today's "Forgotten" Books entries...Evan is this week's substitute host for the roundelay while Patti Abbott is on retreat in Nixonian realms.
Posted by Todd Mason at 1/21/2011 11:16:00 AM

Another mind-bogging posting, Todd! You're right about that Table of Contents for BEST FROM F&SF, 5th Series. THE MAGAZINE OF F&SF attracted the best talent writing at the time and it sure shows here. I had forgotten Richard Poirier edited that O. HENRY AWARD volume. Poirier was one of my favorite literary critics.

Thanks, George...weird that I should think this morning of these three anthos, and then learn of Price's death. (And I try to use sparingly my ability to bog men's minds...it gets a bit messy.)

Richard Poirier, a prolific and populist cultural critic who founded a literary journal, Raritan: A Quarterly Review, and who was a founder of Library of America, the nonprofit publisher of American classics, died in Manhattan on Saturday. He was 83.

Before founding Raritan, Mr. Poirier was an editor of Partisan Review, and he also edited anthologies, including several editions of “The O. Henry Prize Stories,” the annual collection of the best contemporary short stories; and a two-volume compilation, “American Literature.”

I've read almost all of Richard Poirier's literary criticism, Todd. It's readable and sensible, something you can't say about most contemporary lit cit. I liked the early Reynolds Price novels.

...is a thoughtful remembrance. I'm trying to remember if I read some of his work early on, beyond introductions and headnotes...I certainly would pick up a odd issue of RARITAN from time to time in the last decade or so.

The first paragraph:
Richard Poirier taught English at Rutgers for some forty years (he died last summer), and he often argued that teaching students how to read, as distinct from teaching them how to be good citizens, or political activists, is the only thing literature professors are really good for, or qualified to do. In an essay he wrote in 1970, he suggested that “literary study can...be made relevant to life not as a mere supplier of images or visions, but as an activity; it can create capacities through exercise with the language of literature that can then be applied to the language of politics and power, the language of daily life.”

Great line-ups. And I learned a new word: croggling. At least, I expect to learn it, once I find a dictionary that has it. It ain't in my Funk and Wagnalls.

Fan-speak for something so startling (and/or impressive) that it leaves one at a loss for words.

Why, oh why is SF full of people who think puns are funny? Maybe it works better in context. But I felt a distinct elbow in my ribs as I read that line.

It does, largely because the punster is a cad who is punished both for that and his caddishness generally...and it comes at the near-climax of a rapid-fire series of jokes in the vignette. Contrast the Asimov vignette, which falls over sideways since it is merely a joke set-up that leads to a less clever pun that even that (close paraphrase: He was trapped in a skiffy nightmare scenario, a world dominated by Giant Aunts.)

And because they all read Carroll and Lear, and Shakespeare...

Been lurking on your blog occasionally. Thought you might be interested in our documentary about Charles Beaumont. It features interviews with Richard Matheson, William F. Nolan, Ray Bradbury and so on. We have two versions - details on our website: http://www.jasunni.com

Thanks for the tip, Sunni...I'll take a look.