Hoots and Hollers: Folk Music and Its Extensions at Midcentury (...and Up Till Now...) 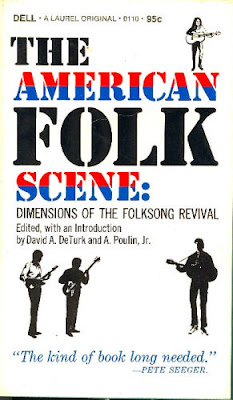 Three books this time coming at and attempting to explicate and/or contextualize the varying flavors of the popular folk-music movement of the 1950s and '60s, and particularly some of the most popular performers (and lightning rods) of that field and time. The American Folk Scene: Dimensions of the Folksong Revival is, like The Age of Rock reviewed here briefly, a somewhat haphazard collection of magazine essays, from sources ranging from the folk-music "insider" Sing Out! to Time, that attempts to give a mildly panoramic view of the folk-music scene as it was not quite dissipating, but instead not just bifurcating but polyfurcating if one might be forgiven a neologism...the pop-folk of the Kingston Trio and Judy Collins and many of their peers not quite riding the top of the charts any longer but still retaining an audience, while a number of the younger musicians were moving into folk-rock or were drawn to the new opportunities in country music, while others yet were remaining more or less traditionalist purists...and not a few would hop from one field to another as mood or the commercial vagaries struck. G. Legman is as dour as always, with his "Folksongs, Fakelore, and Cash" and Nat Hentoff (his name misspelled in the citation of this book in the library database WorldCat [see full citation of the anthology's contents below] and dutifully parroted in the Amazon listing) typically sensible in "The Future of the Folk Renascence" and Richard Fariña briefly represented, writing about his sister-in-law Joan Baez and this Zimmerman kid. The essays are, of course, not all equally valuable, nor does one come away with a particularly complete understanding of the "scene" as it was even at time of assembly...but it's a start. (My copy is buried deep in storage, at the moment.) 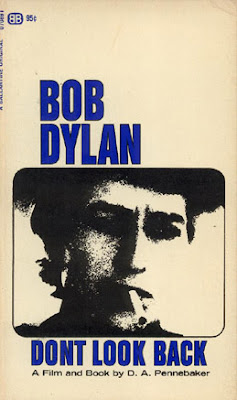 The first time I ever heard Bob Dylan sing I knew he would be a success.
He sounded exactly like Woody Guthrie, an earlier folksinger, and I
figured that if he added a few more imitations–-maybe Bette Davis and James
Cagney–-he would have an even funnier routine. --Mike Royko, "Dylan the Great"

Meanwhile, Zims, who started calling himself Dylan rather early in the 1960s, had already started making a serious name for himself by the time CBS, due to John Hammond's endorsement, started recording him in 1962, and D. J. Pennebaker did no disservice to his own reputation by putting together a cinema verite documentary of Dylan's second tour of the UK, eventually released as Bob Dylan: Don't Look Back (and including, in one early performance sequence filmed around a civil rights protest encampment from several years earlier, footage taken by Ed Emshwiller for an unfinished project that Emshwiller gave to Pennebaker). Released in 1967, the film spawned an interesting 1968 book project, which combined transcripts of the lyrics and dialog from the film with stills (this being as close to a take-home version of the film as most fans could afford in those years), not a unique project but still not that common (the Ballantines, who were always ready to innovate, were then still in charge of the publishing house that bore their name), and it's a deft job...Pennebaker warns that it's no substitute for the film, but it does provide a nice supplement to some fleeting or murky dialog...my copy of the book is from the New Video reprint of the Ballantine edition, released in 2006 as part of the "65 Tour Deluxe Edition" of the film on dvd, with a bonus disc of outtakes and related recordings and a little flipbook that allows handheld animation of the promotional film for "Subterranean Homesick Blues"... 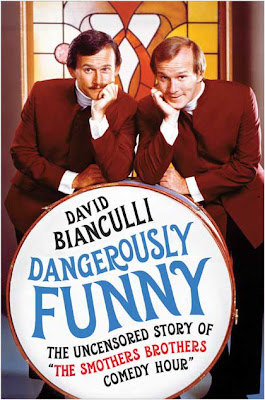 
David Bianculli's book is still in print from a traditional (if megaconglomerate) publisher, as opposed to being a premium in a dvd set, and it shows the signs of being a megaconglomerate book...notably a lack of copy-editing, or of editorial guidance that might've sent Bianculli back to get a little deeper into the background of his subjects. The television reviewer seems to think the Weavers disappeared from the face of the Earth after their first break-up in 1952, for example, rather than having reformed in '54 and helped foster the folk revival the Kingston Trio and other commercial acts sprang from, for the most part...Bianculli even manages to mention Burl Ives and Harry Belafonte repeatedly without tumbling to the fact that Ives and other folksingers and their colleagues in bringing calypso to the US charts were also keeping a presence for pop-folk in the popular consciousness. Even about his subjects at hand, he manages to bobble--while attempting to demonstrate the Smotherses' influence on the next generation, he (rather obsequiously) overpraises Ken Burns and quotes Bill Maher's accurate memory of the song "Mediocre Fred"...without noting that that song was written by Pat Paulsen, a fact which would strengthen Bianculli's point in the passage in question. But DB clearly loves the SmoBros' work, and got some good interview material from them, their sister, and many of the others around them, and I'm not sure he overstates the importance of the Comedy Hour and its spinoffs and the fights with CBS they had. By no means a perfect book, but interesting both for the light it sheds on their early career, and their careers since the firing (and replacement by that other comedy and music series, only in this case much worse comedy and sometimes rather similar music, Hee-Haw...which CBS would high-handedly cancel in turn in its purge of "rural", older-skewing series in favor of the post-All in the Family wave of more "urban/suburban," "hipper" shows...the kind of thing the Smothers were providing when they were fired).

The American folk scene : dimensions of the folksong revival

Contents:
Pt. 1: Folk and the folk arrival. Folk and the folk arrival / Sandy Paton ; Why folk music? / Pete Seeger ; Who invented the folk? / Stan Steiner ; Why I Detest Folk Music / Robert Reisner ; The folk music interchange: negro and white, / John Cohen ; The singer of folksongs and his conscience / Sam Hinton ; The performance of folksongs on recordings / Robert S. Whitman and Sheldon S. Kagan ; "Hootenanny": the word, its content and continuum / Peter Tamony ; Folk music in the schools of a highly industrialized society / Charles Seeger ; The folksong revival: cult or culture? / B. A. Botkin --

pt. 3: Woody and his children: four for our time. Woody Guthrie: the man, the land, the understanding / John Greenway ; The ballad of Pete Seeger / Peter Lyon ; Sibyl with guitar ('Time' magazine) ; Joan Baez, an interview ; Baez and Dylan: a generation singing out / Richard Farina ; Bob Dylan / John Pankake and Paul Nelson ; "Highway 61 revisited" / Irwin Silber and Paul Nelson ; I will show you fear in a handful of songs / David A. De Turk and A. Poulin, Jr. ; Pete's children: the American folksong revival, pro and con / Jon Pankake --