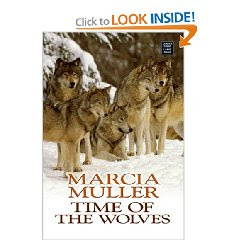 This is the most recent book I've covered in the Patti Abbott-driven "Forgotten Books" series of capsule reviews/recommendations, but it's already out of print (at least in the original edition...the Large Print edition, which has the handsomer cover I've posted here, is available)...Five Star, a division of Gale, aims its products at public libraries, though aficionados of crime fiction particularly have been known to pick up their releases (and they do have available another volume, a mixed collection led off by a collaborative novella, of western fiction from Muller and her husband, Bill Pronzini, Crucifixion River).

Muller began writing western fiction in large part out of enouragement from Pronzini, back in their pre-married days, as Muller notes in her introduction; several of the earlier stories appeared in anthologies edited or co-edited by Pronzini, who has been publishing his own western fiction since the late '60s, and one of the stories in this volume, "Cave of Ice," was their first attempt at a collaborative story. The title story was loosely adapted for an anthology telefilm, Into the Wild, albeit Muller wasn't too impressed with the result. The jacket copy misleads us, stating that "Time of the Wolves" won, rather than (as Muller notes) was shortlisted, for the Western Writers of America Spur Award for best short fiction for its year.

The stories are arranged in chronological order of publication, earliest first, and thus one gets to see Muller get more comfortable with period language in the non-contemporary westerns (the stories very nearly alternate between contemporary western fiction, including a story in her Elena Oliverez series and two in her most widely-read sequence featuring private detective Sharon McCone, which nonetheless has some plot-element or other connection to the frontier west, and historical western fiction set in frontier times)...one of Muller's greatest strengths is her lean, almost transparent prose that also maintains a sort of tension of immediacy at its frequent best, particularly in the McCone stories, a style which is slightly cramped in the earliest historicals, but by "Sisters," a 1989 effort involving two women alienated from their respective Caucasian and Native communities who strike up a cautious friendship, her comfort with the dialect and period references is surer. (I like "Sisters" better than "Time of the Wolves," but the slightly older story is one of those narratives where shitstorm believably follows catastrophe, and I can see why both the Spur judges and the tv movie folks were attracted to it.) The last two stories in the book are set in the same fictional county, in frontier times, as the contemporary novel Point Deception, a nice bit of business (the novel has been on my To Be Read pile for a few months now). As a Detroit native (hi, Patti!) who migrated as a young adult to the SF Bay Area and remained settled there since (hello, again, Patti...whose passage was from Philadelphia to the Motor City area), Muller is one of the best writers about the Bay Area geist and California region we have...she hasn't, for me, yet exceeded the excellence of the first McCone novel I read, 1989's Trophies and Dead Things, but she's nearly equalled it several times since, and no one reading Time of the Wolves is likely to be wishing to read something else instead.

One other oddity about the Five Star edition is that Ramona Watson's Plantin typography is utterly lacking in italics, leaving some titles in the text in all caps, and other passages in bold, though only the latter looks antiprofessional. Perhaps Plantin lacks italics for some reason (and good on Five Star for crediting the typographer).

I've been reading Bill Pronzini's work for nearly all my literate life, but haven't met him yet...I have met Muller, sadly not under the best of circumstances. I used to work in a Borders Book Shop, for the latter half of my stint as the office manager (which at a Borders at that time meant Payroll Manager, Primary Store Accountant, and Last in Line in the Management Hierarchy if a bookseller or barista was being hassled or other momentous authority figuring was required), and our Borders had for most of my time a public events coordinator who just couldn't seem to get the local press nor customers interested in much of anything...this was in the DC suburbs, so US Rep. Barney Frank drew a good crowd, and the combined power of her several audiences meant that a Madeliene L'Engle event, not long before her death, was a blowout, but an appearance at our store by Marcia Muller, scheduled for an late weekday afternoon no less (as I remember it), was not well-conceived. In fact, even I wasn't aware she was coming till an hour beforehand, and when I expressed interest in the prospect, the coordinator asked me if I would introduce her. What I should've realized, but didn't, was that I would also be a large proportion of the audience for her in the store, which eventually numbered as much as five or seven. She was, as one might gather, not pleased, and cut her appearance to a brief Q&A, where it became clear that I was the only person in the six to eight who knew who she was, and the others had decided to sit down out of mild curiosity. (Floyd Kemske, then publishing Aboriginal Science Fiction and writing suspense novels, had a similar experience in our store a few months earlier, which he wrote up for his column in that magazine...Kemske didn't even have the meager benefit of my presence, and since I wouldn't've recognized his name at that point only from Abo, where he chose for no really good reason to refer to himself solely and officially as "A Crazy Alien," a ploy unmatched among professional fiction magazines in its editorial childish cuteness since the early 1940s letter column in Thrilling Wonder Stories conducted by Sarge Saturn and his companion WartEars...actually, Sarge still comes out ahead [Kemske previously had been the editor of an abortive attempt to continue publishing the once-seminal Galaxy magazine, and perhaps feared prejudice on that score]).

I just don't understand the finances of books going out of print in six years. And I've been at author events like that-very awkward, isn't it? I walked by one in NY once where there was no one at all and the poor guy had 20 chairs set up in front of him and twice as many books.

Or less. I believe Five Star feels particularly the pressure of the taxes on inventory that were introduced ca. 1980, and have made publishers very antsy about keeping their midlist in print since...since Five Star is apparently mostly about the several-thousand-copy library sale. It is both blessing and curse that westerns are so popular with the large print audience...curse only in that this implies that the audience is aging heavily.

Imagine how awkward if your are the only visible representative of the store that has so obviously wasted the traveling writer's time.

Now imagine you're the only representative of the store, vs. "your"...

I have attended quite a few book signings and have at the worst been among a group of about fifteen but that was for an unknown author and a self published book.
I'm a fan of Marcia Muller's work and would have been devastated in your shoes. I worked in DC from 1998-2004 and as you can imagine hung out at a lot of the Borders stores. Can you mention which one?

The now relocated Vienna, VA store (the newer store is closer in on Rt. 7).

Ok, I hung out more in the Bailey's Crossroads area.

Yes, if you were at the Borders near Bailey's XRoads, that was where "my" Borders moved to ca. 1997.

I must admit, while I've read the Eddy story, I barely remember it as a story, as opposed to a snag in publishing history...

Can anyone explain to me why readings tend to be so badly attended at cons? I love giving readings, but I stopped after the last bad experience. It's not just me, LOL. If you're a really big name, people show, but they can't be bothered for anyone else.

Too many competing tracks of programming, too many people uninterested in the fiction these days, too much potential drunken fun elsewhere, too much a matter of Who are you exactly?, too many bad public readers. But probably the last two not as much.