Friday's "Forgotten" Books: DELIGHT by J. B. Priestley and FANCIES AND GOODNIGHTS by John Collier 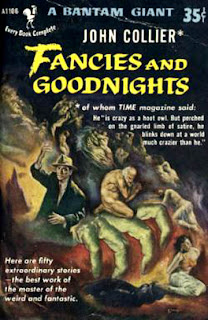 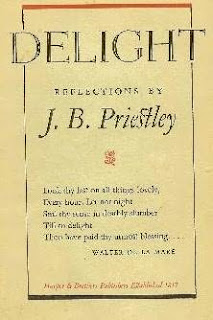 The Contento Index for Fancies and Goodnights, Doubleday 1950 (pagination from the current, NYRBP edition):

Delight is the More Forgotten Book here, a collection of essays by the often brilliant fiction-writer and playwright J. B. Priestley, whom I'd first read for his horror fiction when I was very young, about the sort of things that actually delighted him, oddly enough. He apparently wrote them to cheer himself as much as anything, undergoing at the time some ongoing dental as well as financial problems. Meanwhile, the Collier collection is not nearly forgotten by the standards of most the books cited in this series, and is indeed in print, quite deservedly so, from the New York Review of Books Press...but there was a long stretch during which that the only form of the book available in the US, at least, was the ridiculously abridged (and widely found in library booksales and other secondhand sources) Time Reading Program edition. At least in the '70s, the Collier was in print as a component of the The John Collier Reader, which also included some newer short fiction and the novel His Monkey Wife, in part perhaps Collier's answer to David Garnett's Lady into Fox.

Aside from both men being connections between the Edwardians who helped form their, and my, esthetic senses (Kipling, Wells, the Bensons, Wharton, et al.) and their fellow writers, slightly younger, working similar modes from mid-century onward (Shirley Jackson, Robert Bloch, Fritz Leiber, Muriel Spark), it's also notable how different their approaches were...Collier (1901-1980) was quite open about taking his rage and compressing it into his lapidary prose, sharp and funny and easily cutting whenever he wanted it to be...while Priestley (1894-1984) was, if not inherently gentle, at least drawn to the desire to be as generous of spirit as his "perverse," "peevish" nature would allow. Collier, with the other folks cited, was a major force in reshaping the horror story in the mid-20th century, largely through the stories collected here...Priestley's influence was more diffuse, as he was less focused on any one form. Collier leads off his collection with a story that makes a joke of gang-rape, and it's typical of Collier that it's a brilliantly conceived and well-told joke; Priestley reninds you of the joy of being able to wear essentially what one chooses (his example of this being long trousers, versus the knickers he was required to wear as a child) and eat what one chooses (the sparkling mineral water in foreign hotels standing in for this in that essay). Collier wants to debunk romance and Romance, even while spinning out much of the basis of contemporary "ubrban" or "real-world" fantasy; Priestley, while noting that he's always been a "leftish intellectual," yearns at least at times for a life in an idyllic principality.

Two of my lifetime favorites.

I don't have the Priestley, but I bought the Collier many years ago. It's pretty much fallen apart now, but I can't let it go.

I can understand that. Even though the Time Reading Program edition is ridiculous, and ugly to boot, I have at least two copies kicking around, as even a 2/3rds loaf is better than none (I also have a copy of the READER). I first encountered the Priestly in his reading of some of the essays for Spoken Arts Records...he was an excellent performer of his work, as well.

Do you own all of these, Todd. You must have quite a sturdy shelf for these anthologies.

Well, I don't own a copy of the True (vs. Time, Inc's travesty of the) FANCIES AND GOODNIGHTS collection in any of the editions, except as subsumed by the THE JOHN COLLIER READER, as noted...but it helps (only in terms of storage) that most of my books in PA are in boxes still in my apartment, most of my oder books in my storage lockers in VA. I would still like to pick up a copy of the recording of DELIGHT, though it'd have to be used, I'm pretty sure (if anyone is issuing Spoken Arts recordings, I'm pretty sure that no one is issuing DELIGHT...I have an Ancient cassette dub from a library's copy of the LP.

I've never read Priestley but he seems to be on everyone's shelf. I just got caught up web surfing and learning more. Quite a varied writing career he had.

Priestley was one of literary stars of BBC Radio, along with the likes of Algernon Blackwood...while Collier wrote filmscripts and dabbled in the novel, his focus on fantasy, horror, and suspense short fiction has left him even better-remembered. At least in the States. The ALFRED HITCHCOCK PRESENTS: television adaptations didn't hurt, I'm sure.