Three films in the last fortnight: LOVE AND OTHER DRUGS, BLACK SWAN, the third Salander film, LUFTSLOTTET SOM SPRANGDES (THE [WOMAN] WHO KICKED...)

So, I've seen three newish films in theaters in the last two weeks, if none on this busy weekend...and all three are about women with deficits who meet Good Men and/or Women, and in the case of the Salander film, the third of the Millennium Trilogy oddly mistitled in English, and Love and Other Drugs, the good men (and women) help out our heroine Salander and a young woman with Parkinson's and related commitment issues, to one degree or another, and in Black Swan, the good woman can't quite overcome the influences of the malefactors in the protagonist's life. Though Why women with deficits are consistently In Trouble, when men with deficits (see any Judd Apatow or Happy Madison production, or the likes of The Hangover) are Just Regular Guys, is a good question. One probably should ask why all the women leads in these films are suffering, one hopes only temporarily and role-specifically, from something akin to anorexia, as well... 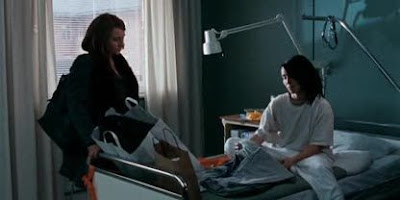 The Salander films are all crowd-pleasers, with the Asperger's-spectrum heroine in this installment playing mostly by The Man's rules as noble public servants help her by rooting out the evil that government bureaus and consultants and patsies do. You can tell she's a Rebel because she wears a mohawk to trial, which would seem to be unhelpful to her case, but the suggestion here as with the other films is that we should be against the kind of condescension that retitles the novels and films in this language and this language only as The Girl..., except in the case of the second novel, wherein the Girl Who was actually a girl when playing with fire. I liked it a lot, as I did the second film also more than the first, just because the first seemed a bit more outlandish...the conspiracy that causally abuses Salander throughout the works is at least somewhat better delineated in the latter two films, both made for TV apparently rather than for cinematic distribution, as was the first. 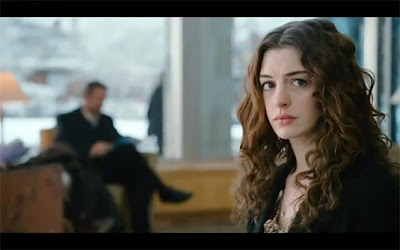 Love and Other Drugs is also related to television, one could say, as the kind of subject matter that writer-director Ed Zwick loves to deal with in television series, ranging from thirtysomething through My So-Called Life, Relativity and, my favorite, Once and Again to the slightly disappointing web-series, later briefly televised, quarterlife. A pilot for CBS, A Marriage, was shot and declined without being shown, so far. So, instead of the kind of historical drama that Zwick has been doing for cinematic release, such as Glory and Blood Diamond, Zwick somewhat splits the difference with a romantic drama with comic bits (some perhaps broader than they need to be) and some serious subtexts involving caring for people with degenerative diseases, and the responsibilities of the "ethical" drug industry and how they are avoided (the film is loosely based on the memoirs of a pharma rep in the last years of their utter cowboy phase, ten to fifteen years ago...considerably if not sufficiently fenced in these days). Good performances, including from Judy Greer and the other smaller-role supporting players, including one of the last or perhaps the last performance by Jill Clayburgh. There are a few threads left dangling (not least in that a drug rep might well be able to provide discounted prescriptions for low-income patients), and I'm not sure whether I think it was deft to leave it vague as whether Anne Hathaway's character was a trust-fund baby or not...somewhat improbable that she can live the life she does without a financial cushion. 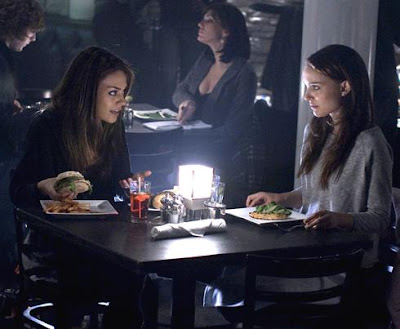 Black Swan is the least successful of the three, while probably the most ambitious. However, it doesn't help that there isn't a non-stereotyped character in the film, despite those characters being fleshed out by good performances by Natalie Portman, Mila Kunis, Barbara Hershey and Winona Ryder among others. But, quite aside from the Fragile Diva, the Good-Sporty Potential Best Friend (and Manic Pixie Girlfriend, Free-Spirit Division), the Stage Mother, and The Bitter Dumped Star, the film as a whole will remind you, or at least it does me, of better films...not solely The Red Shoes, but also Repulsion, Persona, and a bit of the latter-day kind of horror of perception films such as Donnie Darko. Or, to some extent, Aronofsky's previous films...listening to Natalie Hershlag being interviewed about Aronofsky's attempts to create a Method rivalry between Kunis and herself did little further respect his intellect or professionalism. When the script features such Cleverness as the Svengali choreographer of the ballet troupe telling the fragile, overly-controlled, severely in need of apron-string-cutting protagonist that There will be no boundaries between them...ho, ho, So Telling! But it's well-shot, and as I mentioned, well-acted (even if, as actor Marcia Wallace notes on Jackie Kashian's podcast, "Portman" wanders throughout the film looking consistently startled, which helps the constant potential for goofiness tip in that directiton for at least some viewers). I've been told it's a love it or hate it film...it's just a good try, on the part of the cast, by me, and not bad...not nearly as bad nor good as you might've heard or read.
Posted by Todd Mason at 12/20/2010 09:00:00 AM

Email ThisBlogThis!Share to TwitterShare to FacebookShare to Pinterest
Labels: film

I just don't see it as stereotypical compared to the average film. How many films do we see about females striving for perfection in art? I do not by any means think it is perfect, but compared to the dozens of paint my numbers movies I see every year, it stands out as an attempt to do more. And to do it artistically. We have friends who hated it and I think a lot of the audience did too, but I respected it for trying to do more. And it was certainly the most artful horror movie I saw this year.

It isn't about a woman striving for perfection in art...it's about a desperately sick woman who thinks she's achieved pefection through self-destruction...and while it as a film doesn't solely mock her in this, it does at least to some extent do so. As such, for what this is worth, it's counterproductive to encouragement toward achievement by women, and by extension everyone, since it goes for the easy and stereotypical and indeed too close to paint by numbers attitude that Art is Divine Madness...when I'd countersuggest that it's a lot closer to utter clarity, even when the artwork itself is not pellucid in its meaning. And I, in turn, can't see how these characters Aren't utter stereotypes, however deftly enacted and prettily shot...even if they aren't the most common stereotypes of the current cinema.

I think Aronofsky's attempt to create an actual rivalry between Kunis and "Portman," foiled in part because they are apparently friends of long-standing and were comparing notes on his stratagems, is indicative of the kind of condescension to the characters (leave aside the actors) I sense in the film.

As not quite a horror movie, at least as presented, but close to one (it's just ambiguous enough...I'd say MULHOLLAND DRIVE falls over just enough to be one, while this one, like REPULSION, seems to be more a single person's psychodrama), it's certainly stylish, and I haven't seen any actual horror films in theaters this year...but the craft here isn't quite up to the art of such similar-effect films as WINTER'S BONE or THE LIMITS OF CONTROL, and is comparable in its meliorated success to that of I AM LOVE. And, again, very derivative of the better films I cite.

At the end that is true because she's gone over the edge, but the thrust of the early film is about striving for perfection. And of course, the horror elements intersect this.
I guess it works for you or it doesn't and I am so sick of movies that strive for nothing more than box office that I went with it.

I take her to be well over the edge by the beginning of the film, not least in the notion that perfection can be achieved, but the film suggests she's having some perception difficulties from not too far along, quite aside from not being able to cope with or stand up to anyone.

One of the advantages of not seeing very much of the usual run of product from Hollywood, particularly not making the trek to see it and paying extra for that, is that I don't grow as irritated with the usual trash (even with an appreciation for the cast, for example, I'm very happy I didn't waste effort seeing THE HANGOVER till it was on cable), and thus am less likely to find a deeply flawed work of ambition inherently praiseworthy for having ambition, and not really doing enough to realize that.

Did you see the other two? I imagine you did see at least the Salander film...both also ambitious within a more conventional frame...and both of the others have their own flourishes of taking the easy path (the low comedy particularly involving the brothers in LOVE/DRUGS, the perhaps too easy takedown of the miscreants in the Salander), but also aren't as self-congratulatory in their presentation of old, and in this case a bit vinegar-laden, wine...

I have to agree with your take on The Black Swan altho I still liked it. The third Salander film I thought the weakest of the trilogy-it doesn't help that Salander spends much of the film in a hospital room. I didn't like Love and Other Drugs at all. I just don't see the appeal of Anne Hathaway who is a medicore actress at best and, at least to me, odd looking. Luckily I've seen True Grit this week which blows all three of these films away.

I'll disagree with you about Hathaway's skills, though she is a bit odd-looking...with her very large features on a rather small face, something not aided by what I fear is not character-driven starvation. I, too, didn't dislike BLACK SWAN...I'm surprised it's received as much a polarized response as it has. I was rather surprised anyone thinks it better than WINTER'S BONE. I think I like all the Salander films about as much as each other...the first is painted in such primary colors, and the second has such a not-quite ending, that each strikes me as interesting enough, and the portrait of Salander herself seems better done than what I hear/read about the novels' take, in comparison, certainly in translation. Haven't seen the new TRUE GRIT yet, but will probably need to.

I haven't seen any films in theaters this year nearly as miserable as the Oscar-winning CRASH or WANTED...though I haven't seen too many at all, I've enjoyed each at least to some degree, certainly more than any aspect of them bothered me:

As I'd rank them at the moment:

Then there were the several thousand others I might've managed to see, if I'd had the time and screeners...
http://en.wikipedia.org/wiki/Category:2010_films