Below you'll find the links to the text of reviews, citations, and a "lost" Erle Stanley Gardner story among our "forgotten" and sometimes all too forgotten books and shorter works today; also, at bottom, my own reviews for this week. If I've missed yours or someone else's, please let me know in comments. Next week, the bonnie Ms. B.V. Lawson will be hosting the links list (email here), for a week devoted mostly to the work of Jack Vance (or John Holbrook Vance, as the [alas] recently late genius preferred to more formally sign his crime fiction). 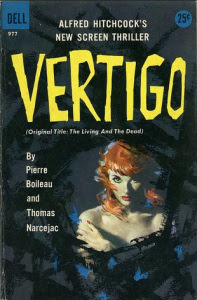 Sergio Angelini: The Living and the Dead (aka D'entre les morts aka Vertigo) by Pierre Boileau and Thomas Narjejac (aka Boileau-Narcejac)

Anonymous reviewer for The Nation (1909): The Perfume of the Lady in Black by Gaston Leroux

Les Blatt: Glass on the Stairs by Margaret Scherf

Brian Busby: Vanish in an Instant by Margaret Millar

Bill Crider: Past Masters and Other Bookish Natterings by Bud Webster

Martin Edwards: Vantage Striker (aka The Prime Minister is Dead) by Helen Simpson

Curt Evans: The Backstairs of the Mind by Rosamond Langbridge 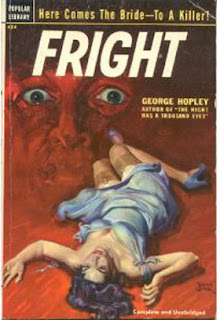 Randy Johnson: The Case of the Bouncing Betty by Michael Avallone 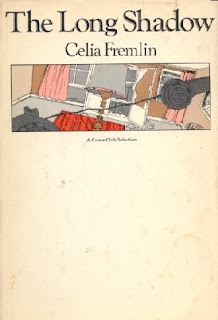 John O'Neil: The Best of Henry Kuttner (in print in the tie-in edition The Last Mimzy: Stories) by Kuttner (often in collaboration with Catherine L. Moore), edited anonymously (but probably by Judy-Lynn and Lester Del Rey in consultation with with C. L. Moore) 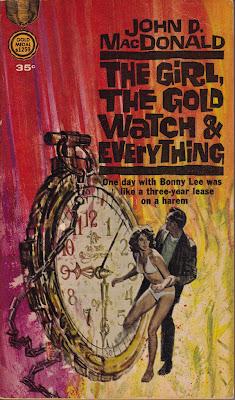 Scott Cupp: The Girl, The Gold Watch, and Everything by John D. MacDonald

Kevin R. Tipple: Absent the Soul: A Collection of Short Mysteries by B. J. Bourg 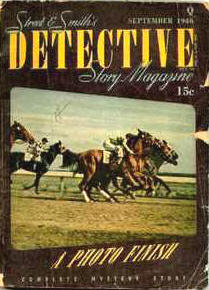 from one of my contributions to the FictionMags Index, or FMI: 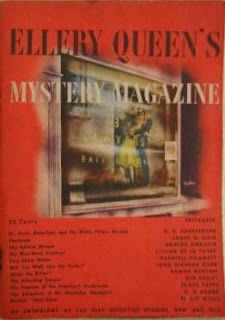 
Ads for the Detective Book Club and an Inner Sanctum Mystery/Simon & Schuster (LAY THAT PISTOL DOWN by Richard Powell).

one of Douglas Greene's FMI contributions: 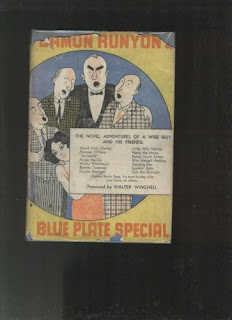 PLATE SPECIAL), like most of the DETECTIVE STORY offerings a basically
serious story dressed up with humor, this time from the master ofpresent-tense slang. The best story is unsurprisingly DashiellHammett's "Two Sharp Knives" (COLLIER'S MAGAZINE, 1942), which morethan any of the other stories in either issue (the Gault and theRunyon come the closest, but it's not that close) gives the sense oflife as it is actually lived by adults. And tells a fine, understatedstory.(And one wonders if Daisy Bacon and Dannay, both on his own ticketand because he seemed to frequently work with women editors, had forobvious reasons less truck with the misogyny several here havementioned as impediments to reprinting MANHUNT and at least someBLACK MASK stories....)
Posted by Todd Mason at 8/03/2013 03:00:00 PM

Please plug me in:
http://longwalkwithbooks.blogspot.com/2013/08/the-dame.html

Wow, you scored some nice magazines at a bargain! Thanks again for hosting FFB while Patti and Phil are frolicking in Canada!

James Yaffe, not one of my favorite mystery writers and overpraised by Dannay as a great talent, was a teenager when he wrote the stories you review here. His debut I thought reads very much like an Encyclopedia Brown story including the obvious flaw with the balloon which most modern readers do spot.

Yaffe was an EQMM discovery through its Department of First Stories; Yaffe was -- I believe -- fifteen at the time. He soon went on to his "Mom" stories (collected in 1997 by Crippen & Landru and featured in four novels). His mainstream novels focused on middle class Jewish life, and his book NOTHING BUT THE NIGHT fictionalized the Leopold-Loeb case. He's also noted for plays and television scripts. His early stories for EQMM reflect his age.

The link should take you to a pic of the young author and Fred Dannay:

Thanks, gentleman...odd how teen writers' work tends to come off callow, somehow, eh? And no trouble at all, George...glad to do it (and I do miss that comics/magazine shop).

Todd, we all miss those great used bookstores. And record stores...

Indeed, George, though this one was less great than good...overpriced, but prone to annual sales, and stocked with things of too narrow an interest, I suspect, except to the owners and a few odd patrons such as myself. Replaced by another store which focused more on gaming than comics, and not on other sorts of magazines at all.

THanks, Todd. You are aces.

You're welcome, Patti. Well, as I note, it's no durance vile, filling in on FFB. Always glad to contribute.