The worst national television series that come to mind:

This began as a comment on Bill Crider's blog, wherein low-budget Houston commercial station Channel 55 is hoping to run a block of Really Bad programming to draw fans of such. Such worthy contenders as MANIMAL and TJ HOOKER and HOMEBOYS FROM OUTER SPACE were mentioned by commenters on both Bill's post and the HOUSTON CHRONICLE posting of the story.

But these all came to me quickly...

THE REAL WORLD OF TAMMY FAYE (THE VIEW may not look less inane in comparison, but certainly less insane.)
THE RICHARD BEY SHOW (though only JENNY JONES among the tabloid talk shows actually got anyone killed, I think)
THE RAT PATROL (sorry, James and Bill...but this has been my high-water mark for mindless he-man drama since seeing it as an adolescent, and in this case, that's a bad thing.)
STRANGE PARADISE (the soap-opera Jamaican? zombies DARK SHADOWS ripoff)
ON THE AIR (the complete misfire historical comedy-drama project of Lynch and Snow after TWIN PEAKS--though the similar REMEMBER WENN was nearly as dire)
IN SEARCH OF, narrated by L. Nimoy
THREE'S COMPANY/THREE'S A CROWD
WHAT'S HAPPENING/WH NOW
THE 700 CLUB (lies, damned lies, and begging for money to deliver more)
WHAT'S IT ALL ABOUT, WORLD?, a rightwing answer to THE SMOTHERS BROTHERS SHOW and LAUGH-IN
ALIAS, perhaps the most overrated terrible show thus far
SCAREDY CAT, just the worst Saturday Morning cartoon I've ever seen, though LAND OF THE LOST might just be the worst of the "live-action" Saturday morning dramas...or at least feature the worst acting I've seen just about anywhere.
THE CHAIR and THE CHAMBER, game shows involving actual torture

My father would want me to add MOTHERS IN LAW...I haven't had the pleasure of that one, nor DR. SIMON LOCKE, YOU'RE IN THE PICTURE, MY MOTHER THE CAR, or any one of a number of truly atrocious-sounding programs.
Posted by Todd Mason at 6/29/2008 02:50:00 PM 6 comments:

We're off to an early start with Friday's "Forgotten" Books, being caretaken by me this week while Patti Abbott, the instigator and usual host, is attempting a vacation.

The idea: is there a book, or for many participants one of a number of books, that you feel is unfairly obscure, or at least important enough that you'd like to write a brief blurb touting it to the assembled blogosphere? Please write that up for Friday morning-afternoon posting (or when you can get it in), post it on your blog, and let me know you've done so, with your blog entry address, please. If you don't have a blog and want to play, I'll post your piece on my blog if you like.

Bill Crider is the earliest entrant this week that I'm aware of, and his citation of Henry Kane's Too French and Too Deadly is here.

And here's Robin Gorman Newman's citation of Patrick McDonnell's The Gift of Nothing.

Susan (aka Susan259) chimes in with Todd Borg's Tahoe Deathfall.

Out of sheer bloody-mindedness, here's Joe Boland's citation of Thomas Perry's Island, which was a late entry that didn't actually come to me.

And I, below, recommend William Kotzwinkle's The Exile.

And the first of our Citations from Blogless Folk:

Van Loon's LIVES, a strange and wonderful book
by Henrik Van Loon, which chronicles a series
of dinner parties in a small Dutch town.
The setting is the late 1920s, and the dinner
host is a man who's doing quite well in the
stock market. He and his friend Van Loon have
found a way to invite dead folk as guests.

The host asks for a brief bio of the night's
guest or guests so he won't inadvertently say
anything rude.

So you get a bio, a list of the dishes served
(including recipes for some of them) and the music
played, the guest's arrival (Leonardo da Vinci comes
in on a glider; Dante arrives with Virgil and with
a demon who is given a pail of kerosene; St. Francis
gets a flock of birds who in turn get some bread and
a brief sermon), and the dinner table conversation.

One of the invitations goes to "the greatest inventor of
all time" -- and the hosts wait to see who it'll be.

Gradually things get darker. When Jefferson comes,
Van Loon gets a phone call that Hitler has just been
elected. On his return to the table, Jefferson asks
if anything is wrong, and Van Loon writes: 'I told him,
"An old friend is ill and may be dying." (I didn't tell
him that her name was Freedom.)'

The book ends because the hosts have to leave Europe
and move to America if they're going to be safe.

This is a strange and wonderful book, well worth looking
for.

Let me add Kate Chopin's The Awakening, published in 1899, to your list of "forgotten books."
Without the guilt and shame of two "fallen women" in Tolstoy's Anna Karenina and
Flaubert's Madame Bovary, Edna Pontellier is presented as a healthy young woman
who embraces and enjoys her sexuality in the "man's world" of the late l9th
century. The book destroyed Ms. Chopin's reputation and her career for it's
"wanton immorality," but it broke open the gates for the women's movement of the
20th century.

William Kotzwinkle is one of the most evocative, and one of the wittiest, of our writers; frequently but not always a fantasist (his first masterpiece and one of his most exhilarating books, The Fan Man; a mass-market chapbook, no less, of his contemporary mimetic short story The Swimmer in the Secret Sea; and one of his most harrowing novels, the autobiographical/recent-past historical Jack in the Box are the major exceptions to the fantasticated trend I've read so far). Perhaps his most impressive novel, in a career studded with impressive novels, is one of his few that are, one hopes temporarily, out of print: The Exile.

David Caspian is an aging actor facing the typical runaround that a non-star encounters in Hollywood; simultaneously, he's increasingly finding himself living a parallel life as a black-market vendor back under the Nazi regime, named Felix. Increasingly, the Felix reality is taking up more and more of Caspian's life...and as dire as things are in 1980s/contemporary Hollywood, they are unsurprisingly that much grimmer under the Reich.

This is the novel of Kotzwinkle's that Michael Chabon might've written, and that D.M. Thomas did, less effectively, as The White Hotel...even if the Thomas was an unlikely bestseller. Happily, a number of Kotzwinkle's novels and novellas (the latter often heavily intertwined with Joe Servello's illustration) are in print, even if he's perhaps best known these days as the auteur of the Walter the Farting Dog easy readers...which might eventually outsell his only bestseller, the E.T. novelization (to which Kotzwinkle wrote a sequel...haven't tried these, but suspect that they are solid work, as much as the subject would allow).
Posted by Todd Mason at 6/20/2008 03:50:00 AM No comments: 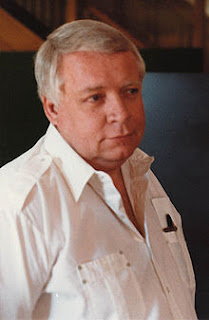 My friend Laura passes along:

Someone with too much time and money on her hands has 2000 little
costumes for her pet squirrel, and has a little industry of gift cards,
calendars, and stuffed toys based on pictures of the squirrel in
costume.

If you ever wanted to see a squirrel depicting Benazir Bhutto, a
praying Marine, a Florida survivalist, Jon Benet Ramsey, and so on,
click the link.