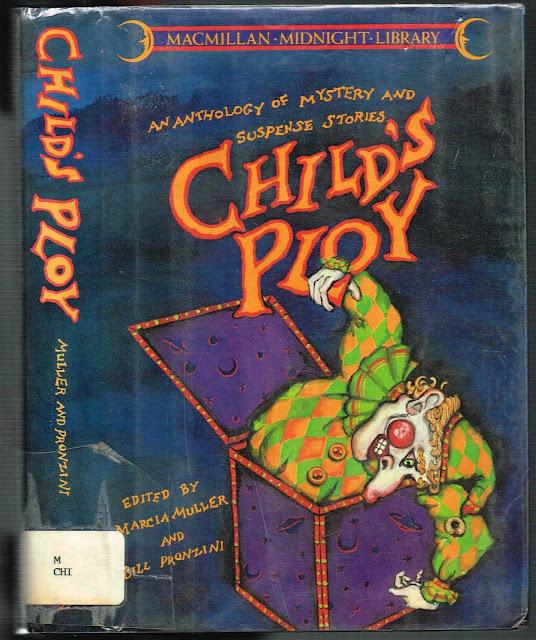 1 * Introduction * Marcia Muller and Bill Pronzini (in)
5 * The Rocking-Horse Winner * D.H. Lawrence (ss)  Harper’s Bazar Jul 192623 * How Pearl Button was Kidnapped * "Katherine Mansfield" (Kathleen Murray) (ss) Rhythm Sep 12 1912, as by Lili Heron29 * The Beautiful White Horse * William Saroyan (ss)  Esquire Jun 1938; also as “The Summer of the Beautiful White Horse” in My Name is Aram38 * Paul's Case * Willa Cather (nv)   McClure’s May 190561 * Little Boy Lost * Q. Patrick (Richard Webb and Hugh Wheeler) (ss) Ellery Queen’s Mystery Magazine Oct 194790 * Too Early Spring * Stephen Vincent Benét  (ss) The Delineator Jun 1933105 * The Threatening Three * William Campbell Gault (as "The Threatening Trio"), (ss) 10-Story Detective Magazine Oct 1948123 * The End of the Party * Graham Greene  (ss) The London Mercury Jan 1932134 * The Landscape of Dreams * John Lutz  (ss) Ellery Queen’s Mystery Magazine Mar 24 1982143 * Fire Escape * Cornell Woolrich (na)  Mystery Book Magazine Mar 1947, as by William Irish (source story for The Window and its remake, The Boy Cried Murder)191 * Ludmila * Jean L. Backus (as by "David Montross") first appeared in Alfred Hitchcock Presents: Stories to be Read with the Lights On, edited by Harold Q. Masur, Random House 1973198 * Day for a Picnic * Edward D. Hoch (ss) The Saint Mystery Magazine (UK) Mar 1963, as by Pat McMahon212 * Carnival Day * Nedra Tyre (ss) Ellery Queen’s Mystery Magazine Jul 1958225 * Good Man, Bad Man * Jerome Weidman   (ss) The Saturday Evening Post Jul 1 1967243 * Looie Follows Me * John D. MacDonald    (ss) Collier’s Aug 27 1949258 * Here Lies Another Blackmailer * Bill Pronzini (ss) Alfred Hitchcock’s Mystery Magazine Jun 1974266 * Morning Song * Betty Ren Wright (vi)  Mike Shayne Mystery Magazine Nov 1982271 * The Hedge Between * Charlotte Armstrong  (nv) Conflict: Stories of Suspense Fll 1953, as “Meredith’s Murder”300 * Uncle Max * Edward D. Hoch (ss) The Saint Mystery Magazine (UK) Mar 1965 as by Pat McMahon
One of the only four? volumes of the Macmillan Midnight Library, all? anthologies by Muller and Pronzini from 1984/85 mixing with aplomb mystery, suspense, horror, fantasy, contemporary mimetic and other stories, despite the subtitle "An anthology of mystery and suspense stories", much in the manner of some of Pronzini's earlier selections, such as Midnight Specials, or the "Alfred Hitchcock"-branded anthologies for Random House Robert Arthur, Harold Q. Masur (one of whose volumes was the original source for the Jean Backus story--before today I was aware of only one original story in an AHP: anthology, Thomas Disch's "Casablanca" in the Arthur-edited volume he assisted the ailing Arthur with), and a few others had been assembling in both adult-targeted and YA-slanted series. I might have copies of all four...this one was recently unboxed in my effort to get my books back into some sort of order. All of them appear to have less than superb, but neither terrible nor conventional, cover designs and illustrations by Mary Mietzenfeid...and story headnotes from the editors. The packaging might've helped suppress sales; perhaps also the tendency for the books to turn up underappreciated (and some widely anthologized) stories from several decades previously.
My listing here seems as if it's the first online to include page numbers, and I've now added the first publication sites (contents and first publication data from WorldCat, the FictionMags Index and ISFDB). Much as I will reread the book in its entirety...but this doesn't stop me from commenting on some of my old favorites and stories I still remember well from this volume and previous encounters...at times in such similar volumes devoted to sf and fantasy stories about kids (Children of Wonder edited by Philip "William Tenn" Klass) or horror, suspense and fantasy stories likewise focused (The Little Monsters edited by Roger Elwood and Vic Ghidalia and sequels and similar efforts) and the like.
For example, the lead-off story is a mildly supernatural bit of a chestnut, the morose "The Rocking Horse Winner" by D. H. Lawrence, in which a boy takes on the burden of keeping his household financially afloat, in the wake of the collapse of his parents' marriage, by furiously riding his hobby-horse and gaining while doing so accurate prognostication of the winning horses at the local track. Graham Greene's nearly as famous "The End of the Party" is also a bit more outré than suspense fiction is usually accorded, involving twin brothers who have a rather bad time with a party game, and the unfortunate consequences that an empathy that tips over into telepathy between twins can have (even as Greene dismisses the term "telepathy" in a line in the story).
On the other end of the spectrum, "The Beautiful White Horse" is, as the editors note, a tale of nearly the most mild sort of horse-theft, or -borrowing, two young Armenian-American cousins in the early decades of the last century can get up to...it's the often-excerpted first chapter of William Saroyan's largely autobiographical and most popular book for young readers, My Name is Aram, but is by no means painfully naive reading for adults. While Stephen Vincent Benet's "Too Early Spring" is, as the editors suggest in that story's headnote, not a story of conventional crime at all...rather than one of too-conventional (and mean-spirited) outlook leading the parents of a community to blithely insist their suspicions of a sort of infraction on the part of their early-adolescent children must be true, and punished accordingly. The crime, as Muller and Pronzini suggest, is one against the kids--too often the case in human affairs...or even beyond, among other species (for we are also animals).
Much of the rest of the book is indeed crime fiction as we usually understand it, and doesn't suffer for that. Further reportage on these stories soon!
The other three Muller/Pronzini Macmillan Midnight Library items I'm aware of are Witches' Brew (1984)--horror and supernatural fiction by women, and the 1985 duo Kill or Cure (medical crime fiction) and Dark Lessons (campus crime fiction).
For more items rounded up for SSW, please see Patti Abbott's blog. The other three Macmillan Midnight Library anthologies edited by Muller and Pronzini: 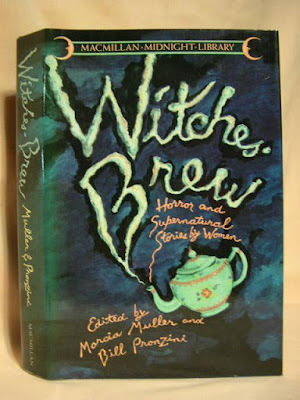 Todd, once again you've up with a book I've never seen or heard of. I'm unfamiliar with THE MIDNIGHT LIBRARY but I'll be search for the four books you've mentioned. Thanks again for bringing obscure books to light!

I am somewhat surprised how obscure these seem to be...only WorldCat among online indices seems to have noticed all four, and not even Amazon has managed to cadge actual cover images for all four in their trade editions (not that Amazon is always the most assiduous of seekers, but one might suspect their vendors might want to be). Pronzini's other fantasy/horror anthologies are mostly carefully noted in the Contento INDEX TO ANTHOLOGIES, but not WITCHES' BREW nor the more peripheral examples.

I have to wonder if Macmillan US was in some sort of turmoil at the time, or if they made a Doubleday-like lack of effort to sell these beyond the mostly public library sales. (That they would've been aimed squarely at library sales would help to explain how WorldCat was aware of them when so many others seem less so.)