PAT PAULSEN FOR PRESIDENT: the LP and the video documentary

I've just now finished watching the (slightly blurry) piecemeal entry on YouTube of Pat Paulsen for President, the video version as narrated by Henry Fonda (even if Peter or Jane might've had more sympathy for the cause). This comes some forty years or so after my first listen to the LP version, narrated by Ralph Story, as one of the first two comedy records I heard as a six- or seven-year-old...my parents had bought a couple of cut-out Mercury label Smothers Brothers records, or so they thought, as they'd picked up the sleeves for Aesop's Fables, the Smothers Brothers Way (a children's album) and Curb Your Tongue, Knave!, one of the SmoBro nightclub albums. But, instead of the latter, the sleeve contained Pat Paulsen for President, which shares with the video version a number of clips from The Smothers Brothers Comedy Hour and a few others, but unsurprisingly as an audio experience also deviates from the video show; similarly, the video depended largely if not exclusively on being deemed fit for broadcast (whether it was offered to stations as a matter of Equal Time access, I doubt, but it might've), while the LP was allowed to revel even more in Paulsen's willingness to be very politically incorrect from the moderate left, most notably in the track called "Victory Rally," wherein Paulsen begins a speech in his usual hangdog manner, moves quickly through the typical stemwinder approach to lapsing into Hitlerian German for the staged cheers of a large crowd...watching some of his other activities in the video version reminds me how much of Stephen Colbert's act at least draws on and follows in Paulsen's footsteps. With the most significant difference in that Paulsen's persona was of the small-time television-station editorialist uncomfortable in his own skin, but nonetheless driven to make pompous pronouncements that undermined the points the persona was hoping to carry the day with; Colbert's cable pundit is ridiculously smooth and self-confident in his similar ignorance and double-bottomed advocacy. The two productions had most of the same, but by no means identical, production staffs; more writers worked on the LP. The comedian and songwriter ("Mediocre Fred" being a favorite of mine) shines in both, and the nature of his satire, though not unique to himself nor his time nor he the first to mount a satirical campaign (nor to return to run again and again; for that matter, Dick Gregory was the candidate of the New Party in '68), still cut closer to the bone in a more pompous time in dealing with such matters, with possibly greater threats to protesters and dissidents than we see now. The third Best of the Smothers Brothers dvd set includes the video documentary, which is also up, as noted, in segments on YouTube (first segment embedded below) and it's worth your time, particularly as the foolishness around presidential politics no more ceases now than it ever has.... 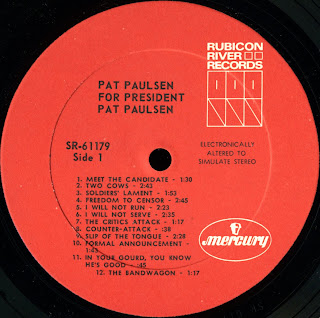 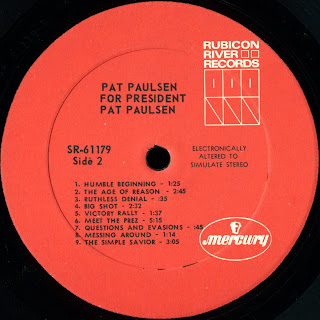 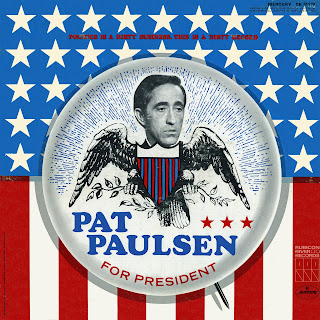 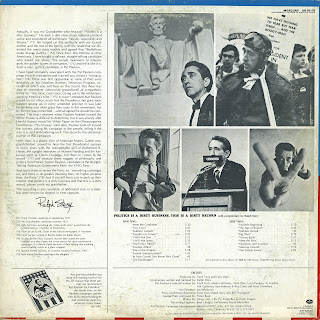 Email ThisBlogThis!Share to TwitterShare to FacebookShare to Pinterest
Labels: Pat Paulsen, The Smothers Brothers, Tuesday's Overlooked Film and/or Other A/V

Paulson, like Ernie Kovacs, seemed ahead of his time. I loved his take on WATCH MR. WIZARD and had great (and dashed) hopes for his campaign. (Paulson seemed a much better candidate than Marvin kitman.)

I will have to make some time for the Paulsen show, soon, though I gather everyone (including Paulsen) was slightly disappointed by it. I do remember him doing his (oddly, failed, and "puzzling" to him in his failure) walking on water bit on an early LATE NIGHT WITH DAVID LETTERMAN....

Oddly enough, I've never read enough of Kitman to know if I'd support his GOP bids...