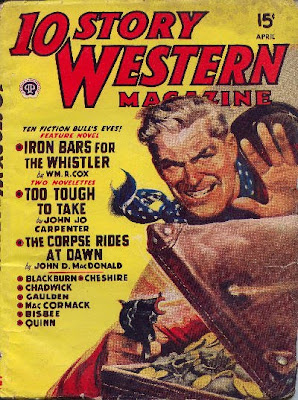 A number of the stories I've read for today's review, on this special Friday Books devoted to John D. MacDonald, were among those posted, perhaps not altogether legitimately, at the web-archive unz.org. Jerry House pointed these out for us at his post of some weeks back, and it's a valuable look at some fiction otherwise not accessible, except through the hardcopies of the back issues of the magazines, or in some cases anthologies published over the years, which Jerry is careful to cite.

The first, however, is not posted, but has been anthologized, by Damon Knight in Westerns of the '40s: Classics from the Great Pulps, a book which has since been reprinted with variant titles, after the story's first and only other appearance in 10 Story Western for April, 1948. "The Corpse Rides at Dawn" does not turn on JDM superfan Steve Scott at his blog The Trap of Solid Gold, but Scott misses, I'd say, some of the virtues and some of the interest inherent in this early story; a basic you-killed-my-brother retribution story is invested with, as Scott notes, an improbably outlandish means for the revenger to get back at the increasingly megalomaniacal villain, but while the villain is too-easily unraveled, the portrayal of the antagonist is a nice larval version of the villains who would recur in MacDonald's later, more substantial work. And the story moves nicely, with deftly-sketched if mostly familiar characters...10 Story Western wasn't a leader in its field, but it's not too surprising that the magazine chose to give this "novella" a cover-billing, with JDM not yet a name to conjure with (albeit this was the kind of magazine that liked to get All the names on the cover). Scott also mentions two other straightforward western stories MacDonald published, and a few echoes of this story in the McGee novels (which had also occurred to me as I read the story earlier this week). 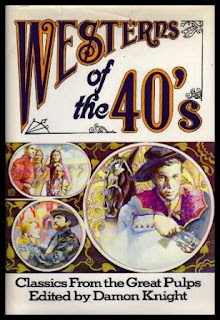 But those three aren't the only western short fiction one can find from him. The two Weird Tales stories at unz.org are both also amusing exercises in MacDonald finding his feet as a fiction writer, and the earlier, "The Great Stone Death" from the January 1949 issue, is also a contemporary western, with a feeling akin to Manly Wade Wellman's stories of the eastern mountains, which takes a mutant twist also worthy of Wellman, as its protagonists are so unfortunate as to encounter the title Thing. While "But Not to Dream" (May 1949) is MacDonald attempting to take the henpecked-husband/worm-turning story and remake it into noir, given the absolutely over-the-top nature of the protagonist's domestic nightmare...and then to go from there, and have the turning worm become more a caterpillar instead (perhaps JDM had been reading Robert Bloch; one could imagine Thomas Harris being sparked by reading this). "Death," for that matter, appeared in the same issue as Bloch's "The Sorcerer's Apprentice," Robert Heinlein's "Our Fair City," and stories by Frank Gruber, Eric Frank Russell, Alison Harding, Mary Elizabeth Counselman, and "Stephen Grendon" burst from his disguise as August Derleth; the May issue brings back Harding and Derleth and adds Anthony Boucher. 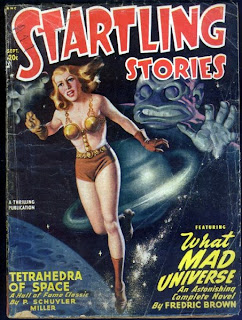 "Shenadun" (Startling Stories, September 1948) is a science fiction story that begins as a sports story, specifically a mountain-climbing adventure that rushes a little too much through its (base-camp!) groundwork...a character who is being touted as important support is killed off before we have a sense of him...and the sense that JDM is being paid by the word in this market shows a little more than in any of the other short stories I've read by him. The protagonist, facing certain death in his attempt to summit a Himalayan mountain not far from Everest, discovers a lost, suspended-animation set of humanoid alien giants, castaways awaiting the closest-approach between their solar system and ours who have probably helped inspire folklore in their limited past interaction with humanity. Amusing, if minor, and again notable for its hybrid nature, as a story which takes its mountaineering at least as seriously as the "You have no scientific training, so I can only give you a sense of our situation" and other, similar gambits in its straightforwardly sfnal passages. This shares its issue with Fredric Brown's What Mad Universe, an early Jack Vance story, a P. Schuyler Miller reprint, and letters from Chad Oliver, Wilson "Bob" Tucker, Marion Zimmer (not yet married to become Bradley), famous fanwriter Rick Sneary, Arthur Leo Zagat and others. The improvements to the magazine by editor Sam Merwin, who would notably later edit Mike Shayne Mystery Magazine in his long career, were already well in evidence. 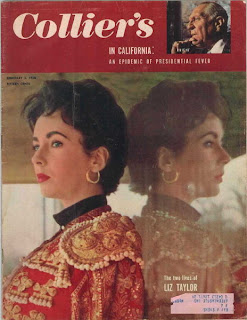 "The Unsuitable Girl" is a vignette from 1956, from a series that Saturday Evening Post competitor Collier's would publish of one-page short short stories. (Or does such a reference to SEP actually help anyone who doesn't know that Collier's was also a hugely popular magazine of general-interest reading?). In its short focus, it still demonstrates that MacDonald had been honing his instruments over the previous half-decade, in telling a slightly less stereotypical version of the emotionally-clueless and overbearing mother/wife and the slightly less desperate, if still not actually effectual, father/husband, and their varying degrees of concern about the dating life of their 17-year-old son, who at story's beginning is seeing a 20yo woman who drives a sports car and otherwise seems to be audaciously devil-may-care. The two "boys" (advisedly), who are Sr. and Jr. in their names (actually, Thomas and Tommy), bond over their slightly less blinkered understanding of the family dynamic, as Tommy spins some Brubeck for dad. (This story shares its issue with fiction by Margery Sharp, apparently a Collier's fixture in these years, and a Donald Hamilton serial, Mad River; other Collier's issues archived here feature JDM stories in the same issue with a Jim Thompson vignette, Robb White and Lawrence Blochman short stories, and the serialization of Old Yeller; among the mostly bland panel cartoons that break up the pages of JDM's text is one by the Berenstains, some years before they first published etiquette manuals enacted by Bears.)

I'd like to have read or reread some more of these "by deadline," and might well add some later on (Jerry in his post mistakenly thought "Elimination Race" [Collier's, 1952] had never been reprinted...it was the first JDM I read, I'm pretty sure, in its appearance in High Gear, edited by Evan Jones). 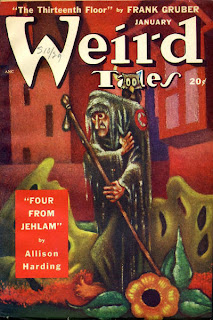 I always love seeing that issue of STARTLING with WHAT MAD UNIVERSE, the first pulp I remember owning. I've read many of JDM's stories in the pulps and have all his novels in paperback.

Steve Scott's THE TRAP OF SOLID GOLD blog has been the best site devoted to JDM for the last 3 years. Unfortunately his last post was Dec 25 and nothing since because of some family health issues. Hopefully he will be back soon.

Excellent post. I wish someone would collect more of JDM's short stories. There must be hundreds of uncollected ones.

Excellent post pointing out the prolific output of JDM. Bill Crider is right: someone should collect JDM's short fiction. I'd buy those volumes!

Thanks, guys. Perhaps the Best Suspense Group could make an offer to the JDM estate...

Did you read many of JDM's slick stories, Walker?

Most of the stories I've read by JDM have been from the pulps, especially the titles published by Popular Publications: BLACK MASK, DIME DETECTIVE, DETECTIVE TALES, and NEW DETECTIVE. The fiction that he published in the slicks did not seem to have the same drive and toughness of his pulp work.

I was really disappointed when he took some of the best of these stories and "updated" them for the modern reader in the collections, THE GOOD OLD STUFF and MORE GOOD OLD STUFF.

Great minds think alike, Todd (well, I know yours is great, at least). I decided to feature John D. stories because I was afraid I'd duplicate someone else's book choice, but I also continue to be fascinated by how prolific he was in his writing. Plus, his stories are largely forgotten by most.

You are too modest, criminally so if you compare yourself unfavorably to me, Beverly. Though it's interesting that you should check in just after Walker, since I think you make a good point in your review of MORE GOOD OLD STUFF that the "updating" JDM did was both minor and pointless, considering how quickly time strands any sort of cultural reference.

After Jerry found the cache of PDF postings and then suggested he might not get around to reviewing them in this context, adding some of that (particularly the WEIRD TALES stories, which I was very curious about) to the 10 STORY WESTERN story was almost necessary.

With CAPE FEAR the first in heavy rotation on cable this weekend, and in the past several weeks, it seems both ridiculous and true that this inadequate pair of films are the largest monuments surviving to testify to his legacy, at least when one goes beyond fans such as we are.