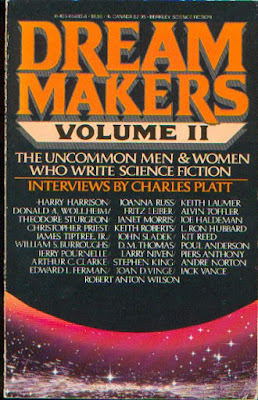 Two books about sf and fantasy and what's around them, Damon Knight's pioneering gathering of essays from various sources, about "The Art of Science Fiction" as the subtitle notes (there had been numerous all-original symposia, and some collections of criticism by individual writers, including Knight himself, but no anthology drawing widely on the previously-published literature)...and the second and perhaps more surprising volume of interviews with sf and fantasy writers by the always ready to be contentious Charles Platt (there are two editions of Dream Makers by Platt...the first his first collection of interview essays, the second Platt's selection of entries from both the first two volumes--I recommend reading the entirety of the two earlier volumes).

Knight's volume, which includes a bit of new material in its time (1977, most notably Knight's own essays on the nature of sf and writing and selling the literature) also offered the first widespread access to certain other documents, published, if at all, only in fanzines of varying degrees of obscurity. This is true of the debate, of sorts, between the rather obscure Philip Geffe and four rather prominent scientists or ex-secientists in the sf field about how scientists are 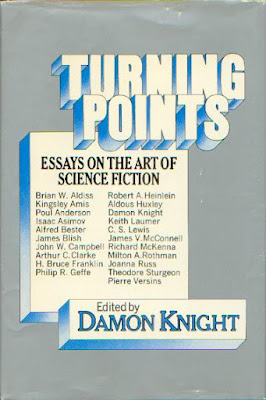 treated in the fiction, and Joanna Russ's speech, "Alien Monsters," which might be even more controversial, citing as it does an illustration in an sf magazine that no one, apparently, has since found...and which I suspect refers to the resolution to Judith Merril's The Tomorrow People...which Russ cites along the way toward calling for much greater sophistication in dealing with characters and characterization in SF. There is no single thread to the essays Knight collects here, sometimes even within the subheadings the selections are classed with in the table of contents, and I don't think Knight ever intended us to consider each contribution to be the equal of every other one, so much as various sorts of nudges to get the reader new to sf, or a veteran reader or otherwise more involved, to consider or reconsider both conventional wisdom or their own opinions about the field...since the book is mostly about sf, rather than the larger field of fantastic fiction, even if the other sorts of speculative fiction by necessity are discussed.

i. A Walk Around the Topic
II. History without Tears
III. Criticism, Destructive and Otherwise
IV. S.F. and Science
V. How To, in Four Tricky Lessons
VI. S.F. as Prophecy
VII. Confessions
(The Franklin item, from his book-length study Future Perfect [Oxford, 1966] was omitted by the ISFDB listing for the book; possibly for some reason it's missing from the Macmillan/Orion 2014 ebook edition.)

Casting one's eye over the contents, one can see contributions from those with careers at the heart of the SF fields, including such critics and historians as Versins and Franklin, and those who made notable contributions, sometimes their most important contributions, but who are best-remembered for other work, such as Richard McKenna, whose bestselling historical and only novel The Sand Pebbles might be better known than his notable fantasy short story "Casey Agonistes" and his other work in his brief career in and out of SF, or  Amis, Lewis or Huxley...Lewis definitely considering himself a fantastic-fiction writer, and Amis as well when so engaged, and Huxley apparently not too worried about being so tagged. I do wish another essay by James Blish was included here, though this one is clearly close to Blish's heart, even if the core assumption, that any sentient species is likely to construct a pantheon of gods since humans all over the world do so, seems to me to be shaky anthropomorphism at its most self-reassuring.

It's a fine and useful book, and I'm glad to see it's once again available, even if solely electronically.

Charles Platt, for his part, took a few more chances and widened his remit rather better for the interviews gathered for his second collection of interview-based profiles...he, with not much justification, insisted that most of the women writers in SF were essentially fantasy rather than sf writers, so there was only the most begrudged space given to Kate Wilhelm as the only woman writer in the first volume of Dream Makers. And that because Platt didn't have access to Damon Knight, so the married couple interviewed each other for Platt's book, making that the only entry which was not the result of a visit by Platt to the habitation of the writer (or editor) being queried. And to wrap the book, writer and fellow interviewer Douglas Winter interviews Platt (Winter's similar book of interview essays with horror-fiction writers, Faces of Fear, would be released the same year as DM2.
But, despite the presence of Fritz Leiber, Poul Anderson, Jack Vance and Arthur C. Clarke in this volume (along with the somewhat later arrivals such as Joe Haldman, Larry Niven and Keith Launer), Platt mostly felt freer to include more writers beyond the Old Lions of the field, and with Russ, Alice Sheldon ("James Tiptree, Jr.")  and Kit Reed managed to take in three of the more important women writers, even if none was averse to fantasy, science fantasy or otherwise not have a periodic table of the elements at hand at all times while writing. Andre Norton, then as now, was vastly better known for her YA fiction than her adult work, and others, such as D. M. Thomas, William Burroughs, and to some extent Robert Anton Wilson, were often seen as apart from SF, no matter how much or how often their key works either were firmly in SF traditions or drew heavily on SF viewpoints or techniques. Alvin Toffler was the one non-fiction writer, albeit an allied futurist, included.  But interviews with Russ, the often interview-shy John Sladek, D. M. Thomas (I prefer his sf poetry to his bestseller, in part a time-travel fantasy, The White Hotel)(William Kotzwinkle's The Exile deals far more nimbly with similar materials, I'd suggest). Sturgeon and Laumer capture each at crucial moments in their careeers, or (as in Russ's case) when cagily willing to discuss questions of sexual identity that had not, as far as I know, been stated even as not quite plainly as they are here. And the candid opinions of such writers as Harry Harrison and Stephen King are more than useful in this context; King's cogent assessment of the work of Lin Carter wasn't likely to arise in too many other discussions he'd have in public, much less transcribed. Platt doesn't actually get to see L. Ron Hubbard, but puts an oar in to suggest he was still alive by the time of their 1983 correspondence.

These two books are collections of useful, if not always the most reliable, statements of thought by mostly major figures in the fields of fantastic fiction, and even those who are not major for one reason or another are worth hearing from even if mostly for the bad example they set. And the mutual appearance of Sturgeon, Russ and Laumer in both volumes isn't the only reason you might gain something from reading them together.

I remember reading these two books decades ago. I thought Damon Knight's book was stronger with a variety of useful essays. Platt's book of interviews was a bit frothy.

Though Knight's anthology is somewhat more uneven, oddly (or not) enough, given that it's from various writers in contexts of varying degrees of seriousness and with differing levels of enthusiasm. But some of the Platt interviews definitely dig deeper than others, in both original volumes.