FFB: THE BEST OF MYSTERY edited by Harold Q. Masur (attributed to Alfred Hitchcock) (Galahad Books 1980) along with other poorly-published books The Best of Mystery: 63 Short Stories Chosen by the Master of Suspense is probably two (or so) otherwise unpublished books smashed together, though I'm not sure how to determine conclusively whether that's a correct supposition or not. And...late bulletin...my copy is still buried in a box, so I'd managed to forget that this book is made up of Alfred Hitchcock's Mystery Magazine reprints to a much greater extent than the contents list I borrowed below indicates! Perhaps all...so it might well've been published through a contract Davis Publications, in 1980 the AHMM publisher, had with Galahad.... Harold Q. Masur was the primary ghost-editor of "Alfred Hitchcock Presents:" (henceforward AHP:) anthologies for Random House in the 1970s, from the 1971 AHP: Stories to Stay Awake By through the 1979 AHP: The Master's Choice; Robert Arthur had been the editor of the Random House series (and their YA anthology series, and the creator and overseer of AH and the Three Investigators children's mysteries) till his early death in 1969 (and even Frank Babics's fine accounting of the ridiculously complex mass of "Hitchcock" books slips here and attributes Awake By to Arthur, an error replicated as a result by The Hitchcock Zone). Hitchcock's death in 1980 probably meant that Random House was uninterested in putting out any further books attributed to him (or took it as a good excuse to end their series), no matter how blatantly ghost-edited they always had been, and yet, I suspect, the (alas, now late) Masur had at least two anthologies mapped out for publication, or a list of stories he hoped to place in further volumes...and those were combined/gathered for salvage-market publication by the "instant remainder" publisher Galahad Books...a suspicion which is furthered by the appearance of two or three stories each by such AHP: volume regulars as Lawrence Block, Bill Pronzini, Donald Westlake (with another yet by "Richard Stark"), C.B. Gilford and others...including "Pauline C. Smith," who is further problematic by being a pseudonym for Robert Arthur as well as the real name of two other writers active in the same years as Arthur...though one of them signed herself Pauline Smith and perhaps had a different middle initial if any...and the other Pauline C. Smith was younger, started publishing later than and outlived Arthur (and continued seeing her work published after his death). In any case, this last Harold Masur "Hitchcock" anthology is a fine, huge collection, hewing more closely to fairly recent (at the time) stories published in the crime-fiction magazines or by regular, active crime-fiction writers than most of the AHP: books did, as they strove to include more chestnuts, particularly from the horror-fiction canon, and more writers who might be seen as at the fringes of crime fiction (such as satirist John Kefauver, in most of Masur's volumes), as well as a science fiction story (such as C. B. Gilford's older story here) or fantasy or two or a grim naturalistic character study among the more straightforward suspense and mystery stories. The "instant remainder" books attributed to Hitchcock published since have been products of the editors of Alfred Hitchcock's Mystery Magazine, whose "best-of" volumes were most of the books attributed to Hitchcock published by Dell in paperback in the latest 1950s onward, along with Dell's reprints of earlier ghosted anthologies attributed to Hitchcock, such as Bar the Doors, and Dell's reprints of the Random House AHP: hardcovers, usually split into two paperback volumes and sometimes replacing some of the content of the AHP: hardcovers with other stories (frequently taken from Robert Arthur's YA anthologies). Usually this last happened because an AHP: hardcover, particularly the Arthur volumes, might reprint a novel that had had no hardcover publication, but did have an in-print paperback edition...and, to further the confusion, Dell in the 1970s started reissuing their AHP: reprint volumes under some variant titles, rather than the previous format of calling the second paperback volumes "[X number, for example:] 13 More Stories from AHP: [Whichever]"...Frank's site valuably also takes into account Peter Haining's UK "Hitchcock" anthologies, which, unlike most Haining anthologies, weren't reprinted in the US. Ridiculously complex mass might be an understatement.

Previously on the blog I'd reviewed two other anthologies, among so many others, drawn from favorite fiction magazines of mine, and in looking again at the two books, one drawn from The Magazine of Fantasy and Science Fiction and the other from Fantastic, it still impresses me how they demonstrated all the ways fine books can be mispublished. For example, I was at best barely aware of either book when they were published in 1985 and 1987 respectively, despite being their ideal audience. Of course, the F&SF volume, which was presumably offered to mainline publishers such as Doubleday, the regular publishers of a once-annual series best-of anthologies from the magazine, being instead published by an instant remainder publisher, which had no ad budget and presumably saw no review copies sent anywhere (even given that Octopus was a more ambitious remainder line than most), and ISFDB indeed records no reviews for the book in the usual media of the time. And yet it's at least a near-brilliant and hefty selection, as the table of contents below will demonstrate. Meanwhile, the somewhat more slapdash volume taken from Fantastic...with one story curiously reprinted from the utterly different 1950s magazine Fantastic Universe, presumably out of some sort of filing error on the part of co-editor Martin Harry Greenberg, who'd systematized his editing process by creating a vast database of stories including his rating of their quality, showed other signs of being assembled with less than full attention, but was similarly offered on the market by its wealthy game publisher, TSR, with little sense of how to connect with the fantasy- and sf-reading public. And it, too, got no reviews in the fantastic-fiction media as notated by ISFDB. TSR spent enough on the book to include a rather haphazard selection of covers from issues of the magazine, on heavy stock and in full color, when that was still rather more expensive to do than it is now, but couldn't be bothered to list the contributors' names legibly anywhere on the covers. And while the selection of stories from the pages of the magazine is more very good than as great as it should be (no Fritz Leiber story?--not that the Leiber choice in the F&SF volume is ideal, either), there is no lack of commercially potent as well as distinguished artists among those contributors. So, at least one of the best books drawn from F&SF's inventory, comparing even with a long list of very good books indeed, and only the third book (and last, so far) to cover nearly three decades of Fantastic, and the first not to be published by an impoverished publisher, were both barely made available to their natural audience and are mostly forgotten still. 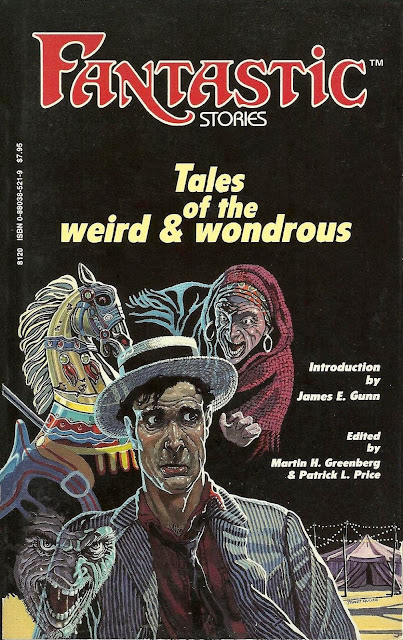 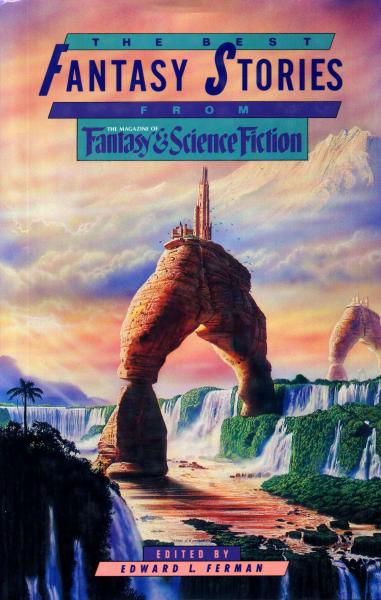 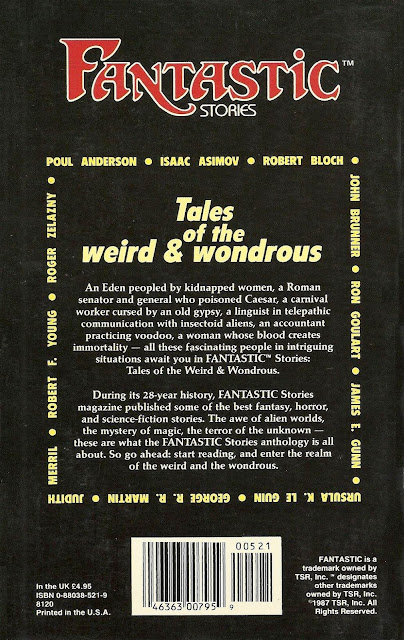 My head is really spinning from all that AHP back and forth, but kind of in a good way! Thanks Todd.

Yeah...it was odd to belatedly remember this was an all-AHMM volume...Masur asked to do it for Old Time's Sake?