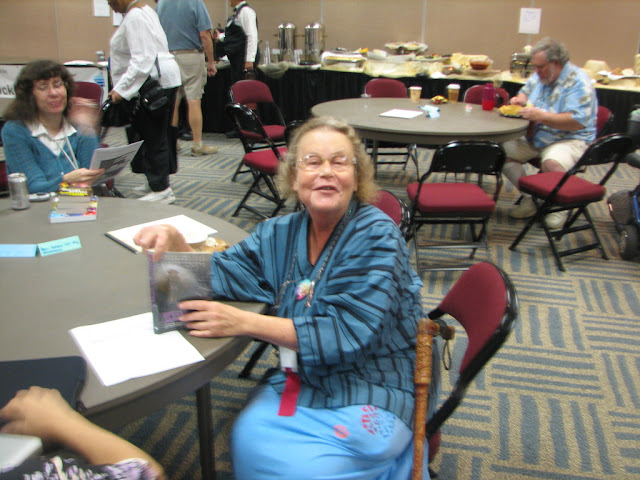 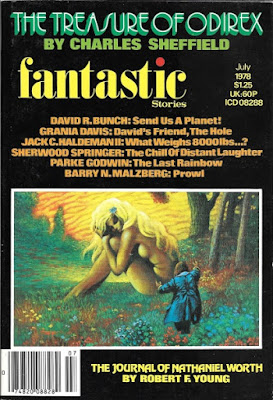 or so, mostly over FaceBook but also directly, and (as most people who've had an opportunity to correspond or speak with her will also tell you) she was an utterly graceful and kind person to have conversation with. I started reading her work in 1978, with a fine short story called "David's Friend, the Hole" in the first new issue of Fantastic I bought and read, dated July 1978, and the first novel of hers I've read, noted in the review below, was her collaboration with her ex-hustand Avram Davidson (they were married 1962-64), the last novel he would see published in his lifetime, the fine Marco Polo and the Sleeping Beauty (Baen, 1988), which I'd hoped to reread for review today, but circumstances haven't allowed for that...I also have several of Davis's solo volumes at hand, including her recent retrospective collection of short stories, Tree of Life, Book of Death, too on the nose a title at the moment, published in 2013 by Richard Lupoff's imprint Surinam Turtle Press. I also have copies of her novels The Great Perpendicular Path, The Rainbow Annals and Moonbird in my vast To Be Read stacks, though I certainly meant to get to the collection first, and read the half or so of the book that will be still new to me. Perhaps sooner than I would've eventually gotten to that, now. 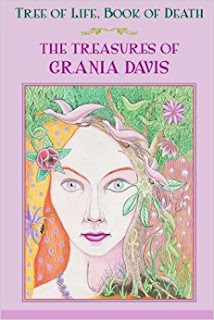 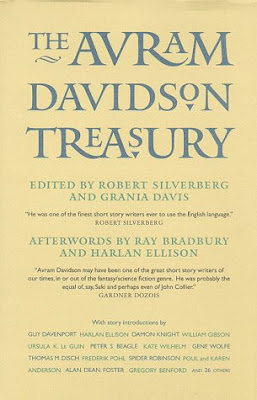 Kind of a pity "David's Friend, the Hole" didn't make the cut...it's a disturbing but quiet fantasy story about a bright young kid in deprived circumstances, less obviously anguished than the older teens of Kathe Koja's first novel The Funhole, always published as The Cipher...and David's hole is less communicable. The two stories aren't too similar other than in spirit and in the central metaphor, but I wouldn't be terribly surprised if reading Davis's story didn't plant a seed, or vacuole, that grew in Koja's imagination. Koja did recently tweet that the current edition of her book would make a lovely Mother's Day gift, for that special someone...yes, and throw in a copy of Davis's... In the penultimate comment reprinted below, Ethan Davidson, the son of Grania and Avram Davidson, notes they were about to publish the collection of father-son collaborations, and that's out now, too...I was one of several passing along copies of the more obscurely-published Avram Davidson stories as I found them to Grania, for a sequel to this and her other volumes collecting Davidson's short stories, and I hope her sons do manage to finish that collection or those collections as well. 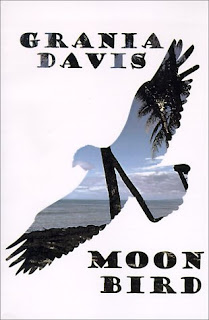 When I was a senior (Class of '82) at Honolulu's Punahou Academy, I made mention in my quarter-page of the yearbook that year of AD, and a frosh girl of my acquaintance, Katie Swift, asked if I was referring referring to the writer Avram Davidson, who along with Grania Davis, at that time resident in Kaneohe with her husband Stephen Davis and their son Seth and, I believe, her and AD's son Ethan, were all family friends of Katie and her parents. When I struck up acquaintance with Grania (at last) through FB, I had my first bulletin about the apparently happily thriving Katie in decades. 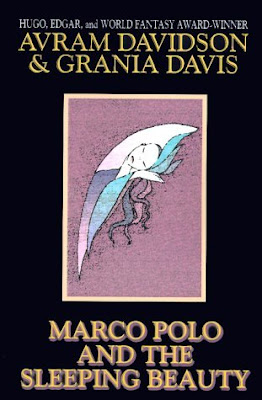 One of the happier moments of patron advice I was able to achieve when clerking at a Crown Books, in Fairfax, VA, between taking my BA and going onto  a short stint in grad school, was putting a copy of Marco Polo... in the hands of a couple of young women looking for recommendations, when the book was new...they were pleased enough to come back  for more, but apparently my second recommendation, Robert Coover's You Must Remember This, didn't send them...

Perhaps I should've opted for some Jane Yolen or Kate Wilhelm. Alas, Davis's completion of the late Davidson's novella The Boss in the Wall wouldn't be published for a decade, and no other Davis books were in print at that time, unless perhaps her first two picture books, for beginning readers, still were, but not her first novel, Doctor Grass, nor her other novels all from a few years earlier, and her anthology of Japanese sf and fantasy in translation Speculative Japan a couple of decades away. And a decade before the lovely string of impressive Avram Davidson collections she co-edited would emerge, this one below the second to appear. 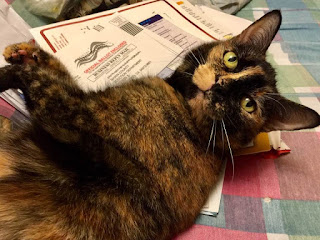 She died suddenly last week, while watching a televised opera in a local, northern California  cinema. At last report, her sons are still trying to place Grania's cat, Kiwi, in a new home. 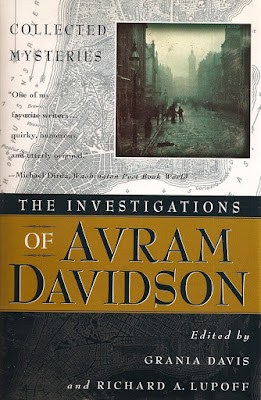 My default choice for my favorite writer, and yet I've only done up a few of his books so far, even given the excellence of the knot of Davidson collections his old friend and collaborator (in life as ex-wife as well as in literature) Grania Davis was responsible for, often in partnership with another admirer of Davidson and his work, at the turn of the last century. So, let's start to remedy that...

Davidson was a brilliant fantasist and a brilliant writer in nearly any field he turned his hand to, and crime fiction seems to have been at worst his second love among literary modes, whether it was in the sleek, pointedly effective historical fiction "The Necessity of His Condition" (where the rationalizations for chattel slavery catch up with a slaveholder), or the discursive, just this side of surreal contemporary fiction "The Lord of Central Park" (about the conduct of river pirates in modern-day Manhattan, and much else); "'Thou Still Unravished Bride'" is anticipatory of the likes of Gone Girl in its short focus, while also drawing in poetic allusion to a deft procedural approach--this was one of two stories by Davidson adapted for episodes of Alfred Hitchcock's television series; the other (and Davidson's first story in a crime-fiction magazine) "The Ikon of Elijah" had also previously been the source of an episode of the CBC-TV anthology The Unforeseen. This book is by no means a comprehensive collection of Davidson's best crime fiction (perhaps more's the pity) so much as a nice sampling of the range of what he wrote in the criminous field...most of the stories from Ellery Queen's Mystery Magazine, where he was one of Frederic Dannay's great favorites (and, as a result, eventually ghost-writer of two "Ellery Queen" novels), augmented by one each from Alfred Hitchcock's Mystery Magazine, The Saint Mystery Magazine and the 1980s horror-fiction digest Night Cry, all among the many receptive markets for Davidson's work; he is one of the few to  have received the Hugo Award (from the World SF Convention), the Mystery Writers of America's Edgar Award and also the soon to be renamed Howard Award from the World Fantasy Convention, among other honors. It's difficult for me not to simply rattle off a string of superlatives when considering Davidson's short fiction, which almost always has an energy to match the imagination and erudition, the elegance and wit on display that his novels, usually written under less than the best financial circumstances, can lack; as ambitious as the short work can be, as well, it also has a certain completeness that the same insecure circumstances denied some of his best work in novel form (where sequels that were clearly planned were either never written or didn't quite reach finished form by the time of Davidson's death); such books as Masters of the Maze, Marco Polo and the Sleeping Beauty (in collaboration with Davis), or 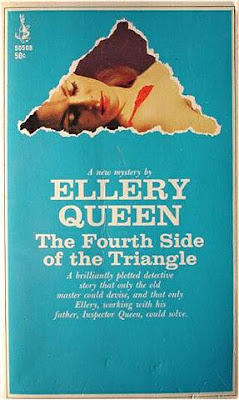 Joyleg (with Ward Moore) are everything they should be, and wonderful, while others, such as The Phoenix and the Mirror, are perhaps even more impressive in their ambition, and not quite as thoroughly realized.  Davis and collaborators are readying another knot of collections and completed works for publication now, and you should watch out for them, and you could do worse than to dip into this, with its excellent introduction by Dick Lupoff and good story-note introductions by Lupoff and Davis, or the broad-spectrum The Avram Davidson Treasury, the collection of his stories published in the Jewish press, his explorations of myth and historical legend in "unhistory", or the collections devoted to such recurrent characters as Doctor Eszterhazy (my own favorites among his work) and Jack Limekiller, or others while waiting for the new books to appear; an e-book edition of this volume was published by Minotaur in 2015.

Jerry House said...
Davidson, like Fritz Leiber, never ceases to amaze. In my greatest fancies, I am transported to a world where there are many more stories about Dr. Eszterhazy, Jack Limekiller, Vergil Magus, and Peregrine...a world where he and Harlan Ellison actually finished and published DON'T SPEAK OF ROPE...a world where Davidson continues to write those amazing Adventures in Unhistory...a world that sadly exists only in my dreams. **sigh**
March 4, 2016 at 11:35 AM

Todd Mason said...
Or, perhaps, Jerry, Davidson and Ellison might've written the comic novel they might've, along the lines of "Up Christopher to Madness"...or, better yet perhaps, a novel set in the Greenwich Village or larger New York that Davidson certainly dealt with in some of his most personal and delightful short stories.

Jim, it's a strong and sardonic story...Davidson's anger is usually expressed in his most straightforward and concise work.
March 4, 2016 at 12:48 PM

Todd Mason said...
Indeed. And THE AVRAM DAVIDSON TREASURY, THE OTHER NINETEENTH CENTURY, THE ENQUIRIES OF DOCTOR ESZTERHAZY (or the ADVENTURES volume expanding that), ADVENTURES IN UNHISTORY, MASTERS OF THE MAZE or THE REDWARD EDWARD PAPERS would all make sensible next reads, if you haven't yet...
March 4, 2016 at 1:45 PM

Sergio (Tipping My Fedora) said...
Fascinating - I do have a nice copy of TREASURY on my shelves I'm glad to say but have not actually come across this one (I did read the Ghosted Queen books - not my favourites frankly).
March 11, 2016 at 4:11 AM

ethan davidson said...
We have just collected an anthology of colaborations between myself, Ethan and my father, Avram Davidson. It is called "Davidson & son". It is avaliable on Amazon.
April 12, 2016 at 3:34 AM 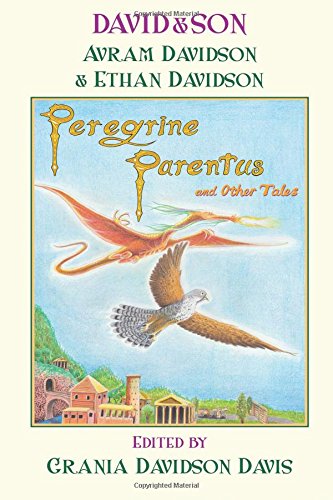 Nice tribute Todd, thanks. (and I still don't have the INVESTIGATIONS book come to think of it!)

Thanks, Sergio...copies can and should be had.