Friday's "Forgotten" Books: THE UNEXPECTED, edited by Leo Margulies (or Sam Moskowitz or D. R. Bensen, or perhaps some combination) 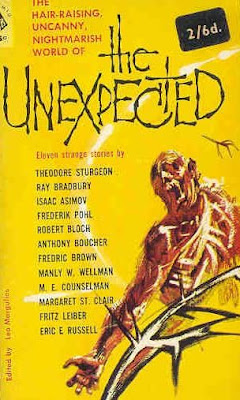 The Contento Index of this anthology:

Of all the anthologies drawn from the fiction published in Weird Tales, this might be the only one (certainly the only one I've seen) which draws entirely from the Dorothy McIlwraith years of the magazine, 1940-1954. Given how often Farnsworth Wright, her predecessor (editor from 1924, after the magazine's weathervaning first year, to 1939), is often credited for all the Important and Creative work WT published, this was a pretty extraordinary idea for 1960 (published in early '61)...albeit most of the writers collected here were at least as potent commercial forces at mid-century as Lovecraft, Howard, or, certainly, Clark Ashton Smith or Seabury Quinn. (As well as being generally better artists, but that's my opinion, if one shared by any number of other not merely contrarian observers.)

This is a nice mix of classics (the Wellman, the Brown, to some extent the Sturgeon--a collection of Sturgeon's horror and suspense fiction is overdue, perhaps particularly as the Complete Stories project comes to a close--and the Leiber) and relatively obscure stories (most of the rest...nearly all of whose authors had written better-known fiction for WT, aside from Pohl and Asimov, whose minor but not-bad story was their only WT appearance--and only formal collaboration, I think, till their nonfiction book Our Angry Earth shortly before Asimov's death). That odd quality makes me wonder if Sam Moskowitz ghost-edited this one, as he did the other WT anthos attributed to Margulies and published by Pyramid at about the same time...Weird Tales and Worlds of Weird (the latter cited some months back by James Reasoner as his forgotten book). Then again, D.R. Bensen, who edited for that excellent paperback house Pyramid, and who was solely responsible for two fine anthologies from Unknown, might've done more than shepherd this one through the process (Pyramid did an impressive set of Harlan Ellison reissues in the mid 1970s, among much else, before being eaten up and spat out by Harcourt Brace Jovanovich in the latest '70s as the Jove Books line...the elegant packaging of most 1970s Pyramid Books, at least the ones I remember, abandoned for some real insults to the eye). (Late bulletin: I'll have to admit the 1972 Pyramid edition of Robert Heinlein's The Unpleasant Profession of Jonathan Hoag, retitled for that issue 6xH, as in "Six by Heinlein," has a quite unappealing attempt at psychedelic cover illustration, as well as an awkward new title...I happened to pull this one out of a box this morning while looking for something else.)

Margulies, of course, had purchased the WT inventory and rights from Short Stories, Inc., after the latter's 1954 collapse, and briefly published a Weird Tales magazine revival in 1973-74, with Moskowitz as editor (Margulies had more sustained success with Mike Shayne Mystery Magazine, which he published from 1956 up till his death in the latter 1970s (it lasted for several more years in other hands), and his other projects in the post-pulp era included Satellite Science Fiction in the latter '50s, The Man from U*N*C*L*E Magazine [and The Girl...] during the TV series' runs, a revival of Zane Grey Western Magazine around the turn of the 1970s, and Charlie Chan Mystery Magazine in the early '70s).

Mary Elizabeth Counselman and particularly Margaret St. Clair have been entirely too overlooked in recent years, as have, to a lesser extent, Eric Frank Russell and Anthony Boucher, though at least as a critic and fan of crime fiction, Boucher is in print and memorialized by the annual world convention. Of the four, Counselman didn't publishe much fiction outside of WT...while St. Clair was able to get almost naked horror into Galaxy magazine at its early '50s first peak. John Campbell used the excuse of a Russell novella to found his fantasy magazine, Unknown, which had a fruitful interplay with McIlwraith's WT. And, of course, Bloch and Bradbury were the hottest stars of McIlwraith's WT, here represented by insufficiently representative stories, but they'll do.

See if you can find a copy, pehaps without the shillings and pence sticker...it shouldn't be be too hard.

I really really really have to locate a bunch of Margaret St. Clair works. And what an awesome cover! I tend to like the more classically "bad" covers but the impressionistic aspects of this one just come together in a good if gaudy way.

Oh, duh! It's a British cover.

Nope, Yank cover. Hence the need for the big sticker. Imitation Richard Powers, I'd guess, rather than one of his own (he'd been doing covers for BEYOND FANTASY FICTION and both Ballantine and Berkley, iirc, but dared not publish with anyone not sporting a B name).

A lot of fantastic writers in this collection that deserve wider recognition.

I think THE GHOUL KEEPERS of similar vintage and pedigree was also an all-McIlwraith-era collection from WT. Don't have a copy at hand to double-check.

Close, but not quite, and thanks for mentioning it, since I was fool enough to overlook it previously (Contento index):

You're right: rediscovery. Also I wonder how many individuals have been to those conventions but have never read a Boucher story. I confess to only one, The Quest for Saint Aquin which was incredible.

David, a number of Boucher's stories hold up well. Beside "St. Aquin", try, among others, the fantasies "They Bite", "Review Copy", and "Mr. Lupescu" and science fiction stories "The Other Inauguration" and "Balaam". I like most of his mystery novels as well; they tend to be somewhat light, funny,and rather Ellery Queenish - pretty much whatever the opposite of "hardboiled" mysteries would be. (Softboiled?)

I note that THE COMPLEAT BOUCHER, collecting his sf/fantasy/horror stories, was released in 1999.

And that Margaret St. Clair has had three collections of her short work. Nothing Compleat, mind you.

Margulies also published SHELL SCOTT MYSTERY MAGAZINE during the Sixties. It had a short run (six or seven issues, I think), but the ones I've read are pretty good, with a Shell Scott short story or novelette in each, backed up by the usual suspects who also filled the pages of MSMM during that era.

I like the McIlwreath issues of WT, too. H. Bedford-Jones contributed some good stories during her editorship. His weird and fantasy fiction is often overlooked because he was such a dominant figure in the historical and adventure genres during the pulp era. I wish someone would do a volume collecting all his "Trumpets From Oblivion" stories, although they get a little formulaic after a while.

Thanks for the reminder of SSMM! There certainaly have been a number of mayfly cf magazines, much as with the fantastic-fiction magazines, that deserved more sustained support.

I know of H. Bedford-Jones, but I've read perhaps one story by him so far, in one antho or another. Given his ubiquity in fiction publishing in his time, it does seem like he'd be ripe for rediscovery as well.