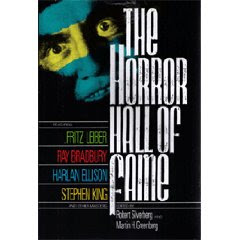 The contents, courtesy of William Contento and LOCUS magazine:

This book has been mentioned and detailed in this blog before, but now for a closer look (particularly after I finally obtained my own copy, and have passed one along to a friend who was bogging down after making the error of buying the B&N Lovecraft omnibus because she thought she was getting first-rate fiction conmensurate with HPL's rep). This was the third such volume that Robert Silverberg has put together, after similar volumes assembled from poll-winners among sf writers (the SF Writers of America's THE SCIENCE FICTION HALL OF FAME, Volume 1) and fantasy fans (THE FANTASY HALL OF FAME, from a poll at a World Fantasy Convention). This one was shaped by ballots at two succeeding World Fantasy Conventions...and it's a solid set, slightly remarkable in that no Lovecraft story managed to make the final cut (not remarkable in artistic so much as populist terms).

It's a collection of chestnuts, as any such "Hall of Fame" volume is likely to be...and only in a few cases do we have a bit of electoral injustice, such as Robert Bloch represented by his most widely-plagiarized story (and one of the most widely-plagiarized stories ever written--only Richard Connell's "The Most Dangerous Game" comes to mind as one more widely aped), rather than his best, by any means. Ray Bradbury might be represented a bit more relevantly by a story either more believeable (say, "The October Game") or actually supernatural horror (say, "Skeleton"), but that's less unjust than passing over such Bloch wonders as "Sweets to the Sweet" or "The Weird Tailor" for Jack.

More troubling is the utter lack of women writers in the book...Shirley Jackson, Margaret St. Clair (aka Idris Seabright), Patricia Highsmith, Joan Aiken (among those active at mid-20th Century...Edith Wharton being an example of someone who might've inspired them) all come to mind as having obvious candidate-stories that probably should've made the ballot, if Silverberg and Greenberg provided suggestions to the voters or not. The absence of Manly Wade Wellman, Dennis Etchison, John Collier, Saki, E. F. Benson is made more obvious by the inclusion of Stephen King, however many people might or might not've picked up the book solely for his name.

That noted, this is an excellent collection for the most part, and an even better means of giving the curious reader a sense of the range of horror fiction over the last century and a half...the fiction gives a sense of that better than the uncredited introduction or the story headnotes, both of which have an unfortunate tendency to blow plot points of the stories collected here, so they are best read after reading the stories, or at least any stories that one hasn't read before.

And if you've not read any of these stories before, including the most influential of Fritz Leiber's short horror fictions and perhaps the best thing Robert Howard wrote, certainly the most famous stories that most of these talented men have written, or at least among their horror fiction (Sturgeon came close to "It" with "Shottle Bop" and several others...Bierce has at least a dozen that rival the selection here, and Poe a few other truly fantasticated horrors, not least "The Masque of the Red Death" and "The Facts in the Case of M. Valdemar"...)...it's hard to go wrong here.

And the introduction is a much less unreliable guide to the field than, say, David Hartwell's attempt at a similar, if more ambitious, guide in his anthology The Dark Descent.

Good stuff. Pity that its publisher has given up the ghost, and it's out of print, though pretty easily available on the secondhand market, in both the original and Doubleday/SF Book Club edition.

Thanks, Todd. Looks like a great collection despite the paucity of female writers.