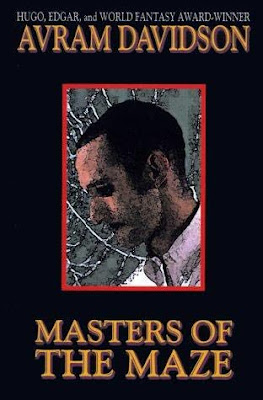 For once, I choose a "forgotten" book that is not only not forgotten, though less well-remembered than it should be, but not even out of print...albeit the current edition, the Wildside Press offering pictured to the left above, is a Print-On-Demand offer, whose pages were shot from the very peccable earlier edition (see right, above). Both volumes have been cursed with rather bad cover illustrtations, and less than stellar design.

Doesn't matter. If you haven't read Avram Davidson's Masters of the Maze, you need to. Not quite to the same degres as you need to read his "The Lord of Central Park" or "My Boyfriend's Name is Jello" or the previous entry in Forgotten Books by Davidson from me, The Enquiries of Dcctor Eszterhazy, which also lives on, larded up a bit with newer (and slightly lesser) stories in a small press edition as The Adventures of Doctor Esterhazy (and again with proofreading that is not all it should be). But this is the best novel I've read by a man who usually just didn't have the sustained energy to turn out his whole novels with the overwhelming brilliance he could bring to his short fiction (and his other short work), though his two collaborative novels aren't too shabby, and then there's this brilliant short novel.

One would think that a book about a Men's Sweat magazine writer would have a receptive audience in today's market, with so many folks today, some not even inronically, so fascinated by these ridiculous heirs to the pulps, 1950s lower-grade competitors to the men's magazines such as Esquire and Playboy, which featured True Stories of Manly Adventures that were rather blatantly made up, or at very least were distorted in the manner of supermarket tabloids, running stories that Harry Harrison, who used to write them, once noted were all titled some variation of "Love-Starved Arabs Raped Me Often." This and "I Beat Off Twelve Sharks" would be cheek by jowl with cheesecake photo-features that didn't dare to be as suggestive as Esquire's pinup drawings, much less Playboy and the competing skin magazines' bare-breasted photos. Some of the monster-movie magazines, some published by the same people, showed more skin than the True Men's Adventure magazines, which numbered among them such once-proud pulp fiction magazines as Adventure and Argosy...while a few of the last stragglers among the Men's Sweat magazines ended their runs as skin magazines themselves, following Hustler's lead in the mid/late 1970s.

As mentioned, the contents of the True Men's Adventure magazines were at least as fictional as the contents of the True Confessions magazines, except when written by Avram Davidson, who would, to the amazement of his colleagues, actually do on-site research, field interviews, and otherwise produce articles of genuine scholarship for magazines that usually didn't care if any sort of truth was involved. Davideson did, though, rather as if having a tawdry market to sell his historical articles to was a way to defray the independent scholarship he wanted to do anyway.

So, the protagonist of Masters of the Maze, as noted, is a writer for these magazines of the more common kind, a hack who's grinding it out for a penny a word to make some part of a living...and he comes upon a Masonic-style secret society that has, for centuries, been guarding a sort of labyrinth between our Earth and a planet inhabited by intelligent, malevolent creatures known as the Chulpex. The Chulpex have their own secret intrigues, and a renegade among them manages to make its way here, and that's where the fun begins plotwise...at one point, a weary Nate Gordon the hack mutters to himself, "Communist Chulpex Ate My Wife," and that's only one of the fine thrown-away lines of demonstrative of the erudition and seemingly casual wit of Davidson, who nails down the historical details of his fraternal order's history, the science-fictional aspects of the threat posed by the interlopers, the adventure plot upon which all here rests, and a running observation of society comparable to anything in Vonnegut or certainly Brautigan. Davidson would publish more ambitious novels, such as the sequence that begins with The Phoenix and the Mirror, but none more sustained, sharp, and funny--even if the collaborations come close, Joyleg with Ward Moore (Davidson's first novel) and Marco Polo and the Sleeping Beauty with ex-wife Grania Davis (Davidson's last published during his lifetime).

Worth suffering the ugly covers for.

I am going to get my hands on one of these Davidson books.

I had never heard of Davidson before, but now it seems that I have lots of good reading ahead of me! "Masters of the Maze" sounds great. I only have on issue of "True - The Man's Magazine," but it is certainly pretty classic. A roaring train on the cover. The Mickey Spillane interview that is included it actually really interesting and informative, though the article really exaggerates every "manly" tidbit about Spillane's life. But this is to be expected.

Indeed. I first encountered TRUE and SAGA and such in their last years, in barber shops I was taken to as a young child...the even more tawdry magazines had mostly died out by then, so I never got to read heavy-breathing descriptions Nazi torture brothels and such at a tender age. Davidson published at least one collection of his nonfiction articles for these and better magazines, CRIMES AND CHAOS, and I suspect you'll find his shorter fictional work richly rewarding...best not to try to judge him by most of the novels, which are usually readable and fun but not him working at the top of his abilities (I have yet to read his, or Theodore Sturgeon's, ghost work for Ellery Queen, though). I found even THE PHOENIX AND THE MIRROR somewhat disappointing, and than might be the one novel of his that most will direct one to.

The ghosted ELLERY QUEENS are a mixed bag. I like the ones Jack Vance wrote--A ROOM TO DIE IN, THE FOUR JOHNS, THE MADMAN THEORY. I'm convinced Vance also had a hand in writing FACE TO FACE, but there's controversy about that. I have the Davidson ELLERY QUEENS, but I haven't gotten around to reading them. Maybe for FORGOTTEN BOOK Friday...