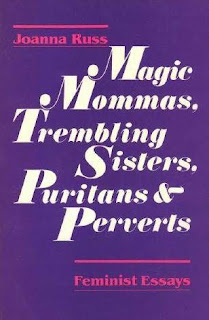 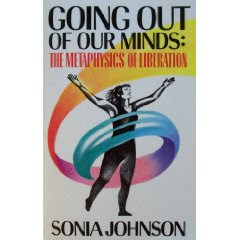 Sonia Johnson was the best Presidential candidate we've had so far (at least in my enfranchised years)...and, in 1984, she couldn't vote for herself. As a fellow Virginia resident, I couldn't vote for her, either, as she was the candidate of the Citizen's Party (and, in Pennsylvania, the Consumer Party)...Virginians in 1984 faced the dispiriting choice of Walter Mondale, Ronald Reagan and Lyndon LaRouche. I voted, grudgingly, for Mondale, but had been genuinely enthusiastic about Johnson, whose platform was at least as good as any of her Green successors...and this book, subtitled "The Metaphysics of Liberation," is largely though obviously not exclusively the account of her campaign, as well as the followup to her earlier political memoir, From Housewife to Heretic. Her intellectual and emotional journey would take her to even more controversial conclusions (such as suggesting that any sort of permanent romantic relation, even one between Enlightened lesbians, requires a sort of self-suppression at best, which Emma Goldman's generation of free love advocates had known and could describe articulately a century before). But at the time of publication of this book, she hadn't yet withdrawn from most of society, nor was she quite done with men (when I met her, after the publication of her next book, she suggested she couldn't understand why a man would like any of her work).

Joanna Russ has had a somewhat more nuanced vision of relations between people, even if at first some have had difficulty picking up on that nuance. This slim, very funny and very deft volume includes her coming-out memoir, an early essay on Kirk/Spock (or "slash") porn--that subgenre of fan fiction mostly written for (mostly straight) women by women, yet involves (in the early form, at least) homosexual encounters between the Star Trek characters. And there are Russ's clear-eyed assessments of the feminist movement around her...this is as good as any of her other usually excellent books.

Pity they're both out of print, and have been for years.

I quoted quite a lot from Russ' essay on pornography and the liberating venue that slash fiction offers in my own essay on Moore and Gebbie's Lost Girls. As in her fiction, she's freewheeling and thoughtful, playful but entirely serious in purpose. Magic Mommas really deserves resurrection for a new generation.

I remember Johnson, but not as clearly as I would like. Housewife certainly generated a lot of discussion. I can understand the desire to avoid any kind of chains, but as I contemplate the inevitable pull of the family disease, I suspect that some self-suppression is probably a good thing (not to mention the lynch pin of society). While libertarians -- most of whom are intelligent yet foolishly consider everyone else to be the same -- argue for complete freedom to be the way, some compromise and suppression will be required to maintain relationships. It's the constant struggle to decide how much of each one is willing to accept. The loss of hedonistic freedom does have some payoffs.

Johnson, I believe, was going beyond notions of hedonistic freedom, to suggesting that any long-term relation might necessarily be stifling to the person...I'm not sure she was sure of that, but her critics sure were sure she was sure.

Too often, libertarians of all stripes simply want to have restrictions off them, and wish to be petty dictators in their own circle...no better example than Ayn Rand, but she was batshit from jump. Stalinism can do that to one.

Joanna Russ often seems ready, and never more than with the essays collected here, to challenge her way back out of any box one might want to put her in...I suspect, to mention my favorite example, that she doesn't actually think of Whileaway (the society on what amounts to future Earth in "When It Changed" and THE FEMALE MAN) as paradisical, particularly as portrayed in the novel...her alter-ego from Whileaway, after all, is a cop whose duty it is to hunt down and kill any woman who dares withdraw from Whilawayan society. Sounds like, to that extent at least, writer's Hell, and I wonder what Russ's ratio of amusement to dispair is when folks might rhapsodize within her ear- or eye-shot about the utopian nature of the concept.

I suspect you're right -- she seems far too intelligent to give into Utopian rhapsodies. When I taught The Female Man in Texas of all places, we had a lively discussion that was in part a reaction to the newness of the idea that men and women might be socialised differently and disagree about optimal circumstances; partly also an introduction to lesbianism for many; and also a serious consideration of how gender (I typed "genre" at first, no less true) gets constructed in this country and how we accept and/or resist it. The students were ready to assume that any point of view might potentially offend me (this after my sexual reading of the staking of Lucy in Dracula had left them flabbergasted -- and grudgingly agreeing that it seemed very much like a gang rape.