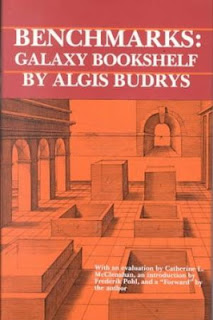 Here's the shortlist from the 1986 Nonfiction Hugo Award ballot, the "Science Fiction Achievement Award" voted on by the membership of the World SF Conventions:

A pretty good year, to say the least, though all of them might qualify as Forgotten, today, even the collection of Ellison essays (largely from Future Life magazine, the companion to the also-folded Starlog) or Winter's interviews with major horror writers, or the probably least-deserving, widest-in-appeal winner of the award, the Weller science-textbook parody.

Benchmarks was a collection of the book-review columns Algis Burdys had written for Galaxy magazine from 1965-1971, for much of the period when Galaxy could make a reasonable claim to have returned to its early-1950s status as the best sf magazine available (particularly if we consider The Magazine of Fantasy and Science Fiction and New Worlds as both going beyond sf for their remit in those years, as they did, and multiply Hugo-winning Galaxy companion If as being pitched just a bit younger, more adventure-oriented, and as a landing spot for work not Quite up to editor Frederik Pohl's standards for Galaxy; 1969 successor Ejler Jakobsson was a little less likely to make that distinction between the stablemate magazines, though he did keep the notion that If was more open to borderline fantasy). Budrys took Damon Knight and James Blish's critical articles, particularly Knight's as collected in In Search of Wonder, as his model for his columns, and as Frederik Pohl recalls in his introduction to the book, he wrote them in such a way as to help the reader understand the books under discussion's places in the development of the art of sf, and in the larger world of literature and human life...an approach that when sloppily applied could be dismissed as pompous (Paul Di Filippo has particularly taken delight in doing so on occaion), and Budrys was willing to mock himself for this potential pitfall (he noted that he took this approach in part because he'd failed to note that Knight had done something similar when creating chapters for his collection out of his reviews, more often than in the original reviews themselves), but AB would rarely get lazy (more frequently toward the end of his run at Galaxy and his later run at F&SF as the burden of the respective columns began to weigh upon him). His column reviewing Harry Warner's history of 1940s sf fandom, All Our Yesterdays, and then going on to speculate on how the flashier, more shallow aspects of sf had filtered out to the larger culture, as represented in part by Budrys's experiences on the periphery of the riots after the assassination of Martin Luther King, Jr., was his own favorite among these essays, and with justice...it's an often brilliantly allusive account of how much our baser desires can trump not only our better judgment but also our necessary empathy. (I took a college course not long after this book was issued, in which we were asked by the instructor to bring in an example of essay we particularly admired, that we found provocative, for the class to read and discuss...the instructor was a freelance writer, who, after reading this column, started to say to me, "I didn't think science fiction writers cared about..." and trailed off, abashed, as she realized that, well, of course they cared about just that sort of thing.)

Budrys's reviews of Harry Kemelman's The Cook and Robert Coover's The Universal Baseball Association, A. J. Langguth's Jesus Christs and other idiosyncratic items are as valuable as his takes on Avram Davidson, Dangerous Visions, and the New Worlds school (he could never endorse their perpective on the world, nor fail to appreciate their attempts to expand and enrich the idiom of sf, which was his own project as well). As a former protege of John W. Campbell, he understood his towering influence, even as his interaction with the ex-Futurians (Pohl, Knight, Blish, Judith Merril, the already late C. M. Kornbluth, Richard Wilson, Donald Wollheim, and all) had also been formative in their expansion of what Campbell had done, and rejection of some of what Campbell strove for, through their influential work in the field. He also was of the first self-consious generation of college-graduate sf writers, along with Michael Shaara, Walter Tevis, Robert Sheckley, Philip Dick, Ursula Le Guin, Richard Matheson, and Harlan Ellison, among others, many of whom it will be noted made even more of a mark outside sf, or at least outside prose sf, and his consideration of this fact, and its consequences for the field, and reflections in the work of those who followed, were often telling. 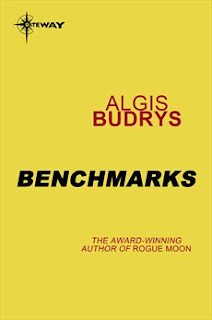 Sadly, Benchmarks has been out of print for years, and its announced companion, collecting the F&SF columns which ran in the latter '70s and into the 1980s, has never appeared. However, an e-book of Benchmarks is available in the UK from Orion.

For a fine crop of other "forgotten" books (only one this time egregiously Not forgotten), please see Patti Abbott's blog...and thanks to Barry Malzberg, whose kind unposted comment nudged me into looking at the latenight first draft I had up here and cleaning it up where absolutely necessary...(he also noted that the post-assassination essay struck him as a better assessment of the zeitgeist of '68 than Norman Mailer's famous essays from that year, and so impressed was he that he wrote a fan letter immediately after reading the essay in its original Galaxy appearance; years later, Budrys told Barry that his letter was the only one he'd received about the essay, essentially the only feedback he'd gotten from the audience).
Posted by Todd Mason at 9/25/2009 08:15:00 PM

Haven't read the Budrys, but I found the Campbell letters fascinating.

I haven't owned a copy of the Campbell letters, but I've browsed it...read the SCIENCE MADE STUPID all those years ago, but have yet to see the Aldiss. Still a sad commentary that the STUPID book took the rocketship.

You would be rewarded by the reading of the Budrys, I suspect, particularly if you don't remember all the columns from the original GALAXY issues.

Budrys was an astute critic. Also of great value were the On Writing columns he did many years in Locus.

ago. many years ago. (Stupid computer

Budrys also augmented those LOCUS essays with a series in his own magazine, TOMORROW SPECULATIVE FICTION, which he collected and published (and, as some readers here know, he also published my first pro short story, "Bedtime," in TOMORROW).

I borrowed my friend Alice's computer to write my response to Bill, but forgot to log out of her session and login as myself.

For some reason, Thomas Disch strongly disliked Algis Budrys. When Budrys died, Disch raked him over the coals on his blog. But I always thought Budrys' reviews and essays were very good.

Well, George, Thomas Disch's fiction drove Budrys up a wall, as perhaps the prime example (after J.G. Ballard, whose work Budrys admired more) of someone in the NEW WORLDS school who had the literary skill, but applied it in wrongheaded expressions about humanity (as Budrys saw it). He also thought Disch at times indulged in a lazy cuteness. Disch really didn't enjoy reading/hearing any of that. For cheap amusement (or even scholarship or to gain some insight on the times in the field), you can look both men's assessment of some of the folks who were coming into their own in the latter '70s, and see Budrys write that, close paraphrase from memory, "Thomas Disch seems now a little old-fashioned, but that doesn't mean that Everett B. Cole is made new; Disch remains an artist and Cole, something other than that" [notably, a very bad imitator of Poul Anderson and Jack Vance much favored by John Campbell in the latter 1950s ASTOUNDING as it was turning into ANALOG; Budrys despised Cole's work]. Disch, at about the same time and about some of the same people, wrote his famously dyspectic essay "The Labor Day Group" (for their tendency to win Hugos, the WorldCons tending to be on Labor Day weekends then)...the nature of Disch's critique of them not too much different from Budrys's of him.

Both the Budrys line about Disch and Cole, and Disch's "Labor Day Group" essay, were in the Books column of F&SF around the turn of the '80s, btw...in those years, Budrys would do about eight to ten of the monthly columns, and others, including Disch, Barry Malzberg and Joanna Russ, would do the others.