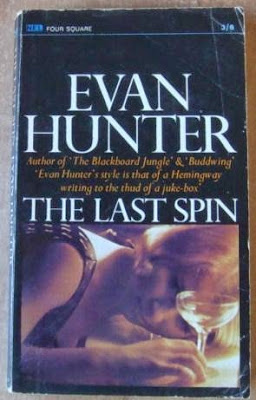 Welcome to this week's list of links to reviews of overlooked (infrequently deservedly) books and stories, by the reviewers detailed below. I'm filling in this week for Patti Abbott, who'll be back at it next week. Please let me know if I've missed your review...and thanks to all the contributors, and to Bill Crider and Richard Robinson for pointers to reviews, and to all you readers...please always feel free to comment here or at the blogs cited below!

Will Errickson: Spectre by Stephen Laws

John Grant: The Girl Who Had to Die by Elisabeth Sanxay Holding

John Hegenberger: The Master of Dragons by H. Bedford-Jones

Jerry House: The Last Spin and Other Stories by Evan Hunter 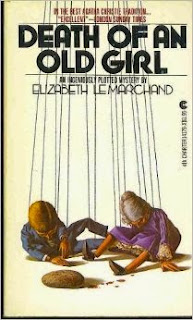 Tracy K: G is for Gumshoe by Sue Grafton

George Kelley: Gateway to Never by A. Bertram Chandler

B.V. Lawson: Death of an Old Girl by Elizabeth Lemarchand; Death on Remand by "Michael Underwood" 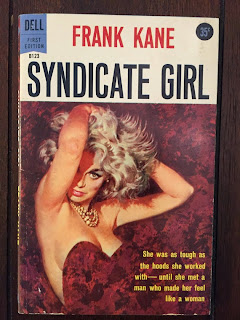 Mark Nevins: A Ticket to the Boneyard by Lawrence Block

J. Kingston Pierce: The Gallows in My Garden by Richard Deming

James Reasoner: The Best-Loved Poems of the American People edited by Hazel Felleman 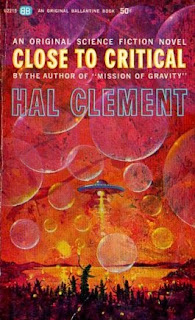 Jim Rockhill: Feesters on the Lake and Other Stories by Bob Leman

Gerard Saylor: Sally of the Wasteland by Victor Gischler and Tazio Bettin; The Things They Cannot Say by Kevin Sites

Todd Mason: American Fantastic Tales: Terror and the Uncanny: From Poe to the Pulps/From the 1940s to Now edited by Peter Straub (Library of America, 2009, a two-volume set also sold discretely)

Some years are tougher than others on those who are choosing among nominees for literary awards--here's the 2010 shortlist for the Howard, the World Fantasy Award, for best anthology: 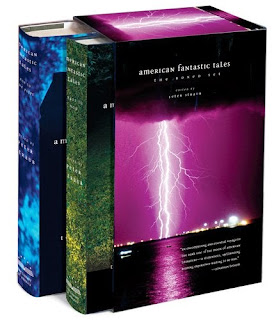 The variant coloring indicates the Straub anthology won the award...of course, it had two unfair advantages even in its impressive company: its scope and its mass, drawing, I'd suggest more successfully than any other survey anthology so far, on both the best and most representative sample of work in the horror field in the U.S. over the centuries (as one sees below, publication dates range from 1784 to 2007), with the American remit very much including immigrants such as Collier and Nabokov. Even with over 1400 pages, it would be impossible to touch on all the important short work and writers within these intertwined traditions, and where I might differ with Straub's choices, they clearly aren't made out of ignorance nor impulsiveness. For example, I probably would've taken another Robert Bloch story, though "The Cloak" is a good choice; even if I were of Straub's caliber as a fiction-writer, I probably would not include any of my own (non-annotative) work, even if my publisher's editor pleaded or politely demanded. Some favorites of mine might well have been included instead of a few here, or, even better, along with: Theodore Sturgeon, Manly Wade Wellman, Margaret St. Clair, Kate Wilhelm, Damon Knight, Avram Davidson, Donald Barthelme, Carol Emwiller, R. A, Lafferty, Joanna Russ, Barry Malzberg, Jane Yolen, Alice "James Tiptree, Jr." Sheldon, William Kotzwinkle, Lisa Tuttle, Janet Fox, Karl Edward Wagner, Joe Lansdale, Joseph Payne Brennan's "Levitation".. I would probably have opted for Ellison's "The Deathbird"...but the selection of Jerome Bixby's "Trace" is among the very sapient, despite other more obvious possible choices. And so, still the best of this kind of book I've seen.

Courtesy ISFDb, here are the contents of the two volumes:
A Library of America interview with Straub on the book.
Posted by Todd Mason at 5/08/2015 08:28:00 PM

Thanks, Todd, appreciate your work on this.

Thank you, Richard...for the benison and your contribution.

Tons and tons of great stuff - thanks for hosting Todd, much appreciated.

Thanks to you as well, Sergio...and condolences over the election. I imagine we'll have a similar bad night coming up next year, no matter how it's sliced.

Thanks for doing the work, Mason.

No problem, Saylor! (I've just realized how many Hello, Sailor references you must've heard over the years, Gerard...)

Another great list of goodies, Todd . . . and thanks for the shoutout. That's a great cover for the Elisabeth Sanxay Holding; I'd not seen it before.

Thank you, John (Paul--and now I realize how often you must've had Beatles references augmented by papal puns over the last decade or three) (and thank you, Gerard) for your contributions...I'd take that Dodd, Mead jacket to be of the first edition...and clearly they were at least as interested in selling Christie books with it as anything to do with Holding's (her) own...

Thanks again for filling in for Patti, Todd! You're doing a great job!

Thanks, George, and for your entry. It's fun but can be time-consuming.

Surprisingly few of that joke, actually. I'm 44, so few of my peers probably heard of the joke.

I just put the first volume of Straub edited collection on hold.

Well, at least George chimed in after John (Paul). Clearly, I'm a creature of my advanced years (50, but probably not acting my age. I preferred Straub's analysis, for the most part, to, say, Hartwell's or Joshi's, as well...hope you enjoy that aspect of the read as well as the selections. The modern volume could've used as much parity of sexes as the first, but others have been worse in that wise as well. (Hey, didn't the Judith Merril book have Zero female contributors, Straw Figure asks? Yup, which is odd, but that book also wasn't so much a best-of or measure of its era or subject, I jauntily reply.)

Thanks for getting mine up. I visit patti's blog all the time but somehow missed that she wasn't doing this week.

That's cool, Charles...it wasn't as clear as soon this week as it was the previous, and I'm glad you were able to contribute. Hamilton, along with being a space opera and weird-scientific pioneer, did a fair amount of thoughtful, relatively quiet work...and not only was Leigh Brackett's lifelong husband, but a great friend of Jack Williamson, and one wonders how much the three of them influenced each other and hashed out ideas and approaches, particularly back in the Heroic Years.