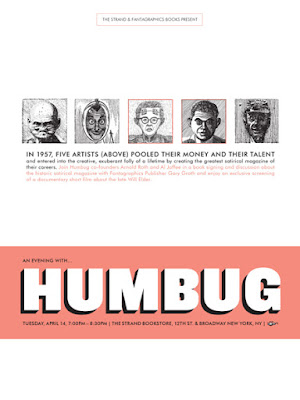 Humbug was the 1957-58 magazine published by a quintet of parody-comics veterans...Harvey Kurtzman had been the founding editor of Mad the comic book, and had edited the first few issues of the larger-format Mad, the new format adopted after the Comics Code had been created by the larger publishers (except for Dell and EC itself) in the comics industry to keep governmental censorship from going any further than it had in the wake of the hysteria encouraged by Fredric Wertham's "exposé" Seduction of the Innocent. Will Elder, Al Jaffee and Jack Davis had worked with Kurtzman at Mad, and continued to work with Kurtzman when he moved on to a brief career with the well-funded, Hugh Hefner-published slick magazine Trump (decades before a certain eventual presidential candidate had even been mocked as a "short-fingered vulgarian" by the not quite as shortlived slick satire magazine Spy)...Arnold Roth, already doing jazz record sleeve illustration as well as magazine comics and art, joined with the crew at that second magazine. So, when Hefner pulled the plug on Trump after the second issue, the five decided to pool their money and produce a small-format magazine, slightly larger than a standard 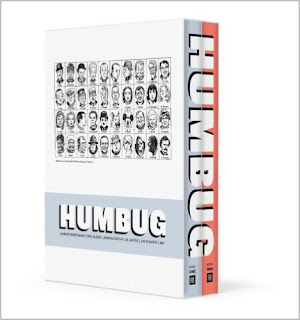 comic book but not much, and priced at 15c an issue rather than the standard comic price of a dime and the rather typical quarter for a full-sized magazine. Under pressure to get the magazine out on a regular monthly basis (endless improvement noodling on Kurtzman's part, among others', had helped doom Trump) in part because their partner in Humbug was Charlton, at the height of its mobbed-up days...Charlton printed and distributed (as CDC) the magazine, and might consider kneecapping anyone who didn't have their paid-for product ready for their trucks to carry. The eleven issues they managed to produce before folding (atop all else, the odd format of all but the last, 8.5 x 11" issues, helped cause the magazine to be lost on newsstands, as it wouldn't quite stand out among comics nor certainly among most magazines of larger size) were notable, not least to the artists who put it together and those who, such as Ed Fisher and Larry Siegel and R. O. Blechman, also contributed, for the amount of freedom to do as they wanted the magazine afforded. There certainly was good and better work in Mad, Trump, and in the later Kurtzman magazine Help!, but the fact that (aside from shady business partners), the five staffers (if particularly Kurtzman as the default editor and chief publisher) had no one to answer to but themselves and each other resulted in a certain creative freedom. And the results were an interesting mixed bag...some very incisive prose as well as comics and advertisement-parody pieces, along with merely mildly humorous work.  John Benson provides some annotations and conducts a fine interview with Jaffee and Roth; he and Fantagraphics head Gary Groth offer a good introduction, and Groth and company's design work on the slipcased two volumes is good (restoration notes from the pages shot from are also included). Sadly, when I picked up the set when it was new and had a list price of $60; now it sets one back a C-note, making it less an impulse purchase than it might be for many of us, as well as not the easiest sell to most librarians. And, frankly, the freedom the artists had was not quite exploited to the fullest...perhaps because of the pressure of practicality hanging over the heads of not-business-minded artists suddenly finding themselves responsible for the business several borrowed money to create...and it is remarkable how frequently one is disappointed, however slightly at times, by these collections from the notable humor magazines of the past.

I still have a few issues of HUMBUG that I bought back in the '50s. I miss the old days.

I almost picked up a scraggly copy of an issue when I bought Donald Westlake's magazine collection some years back, but I rather picked up on the notion that there might be a desire to gather up a scattered set, if possible, and sell them together. They do tend to fetch a decent price.

THE REALIST, and PUNCH as it was in the late '70s/early '80s, might rank as my favorite humor magazines so far (Arnold Roth very much enjoyed working with PUNCH), though all the Kurtzman projects have something to recommend them.

HUMBUG reminds me of another similar humor magazine: CRACKED. Of course, MAD is the king of this genre.

Well, CRACKED was the most durable of the MAD imitators, and a few artists, such as Don Martin, had a falling out or lack of reception at MAD and worked heavily with CRACKED for some time. It finally folded, after being bought by the same tabloid publishers where were doing WEEKLY WORLD NEWS, and thus they had two humor magazines under one roof...the current humor website Cracked.com bought or rent the trademark. HUMBUG does average a bit better than MAD,from the same period, though I think I might like both Kurtzman's MAD and HELP! at their best better than HUMBUG or even the best of Feldman's MAD or that of his successors...when you were a kid, I suspect SICK was the other notable long-running imitator...in my youth, I didn't much care for CRACKED nor SICK but did like DC's shorlived PLOP! when I could find it.

...and I was thinking Marvel's CRAZY ran earlier than it did...a very short run among the early MAD comics imitators in the mid '50s, then a revival for some time starting in 1973. Also not among my favorites. NATIONAL LAMPOON had already lunched by the time of the CRAZY revival...the LAMPOON I liked a fair amount as a kid, not least for the explicit sexuality and the crudeness of some of the humor it allowed itself, as Not Aimed at children. But also for some clever absurdism, even if the magazine was rarely subtle.

Thanks, Elgin. it might also amuse you to learn that George Delacorte and co. disdained the notion of the comics code, perhaps seeing it as attempt at bullying on the part of the Archie Comics folks particularly (as well as not being joiners previously)...the code forbade horror comics...while Dell Comics mostly ran to funny animal and media licensed titles in the '50s...and guess which large comics company introduced the first post-code horror comics to US newsstands, GHOST STORIES in 1962, after launching a TWILIGHT ZONE comic the previous year?