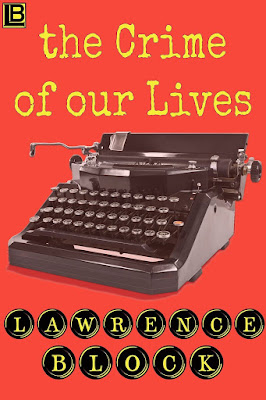 Lawrence Block is a friendly acquaintance. I've mostly avoided reviewing the work of friends and close acquaintances, for much the same sort of reasons Block gives here for usually not writing about his living friends...you don't want to leave anyone out (at least for praise), you don't want to strain relations by not actually loving their (creative) children, nor do you want to damn something, necessarily subjectively, that the next reader might reasonably love. He has produced this collection of his columns in Mystery Scene magazine and introductions to books (while the title essay was an assignment from American Heritage magazine), most of the books collections by the writer-subjects of the short essays, and most of those dead writers Block admired and continues to admire. Ed Gorman, a "virtual" friend to me and that and more to not a few who might read this, being one of the notable exceptions to the long line of dead men (and a few women) otherwise celebrated here (Mary Higgins Clark, Spider Robinson and Gar Anthony Haywood are the only other living writers to get their own entries in the table of contents). But reluctance and perhaps even a bit of bashfulness will out...he has a running joke throughout the Gorman piece about keeping a tally of how many words he's already put down in the essay, very much including the toting-up sentences, as he's been asked for a thousand words.

Block, I gather, isn't Too impressed with his work in this mode, even while often glad to do it, whether to pay back and forward simultaneously, or also to help work out or express a few ideas about the writing life (he notes his Haywood introduction is also a rumination on the place of short fiction in publishing these years).  Unsurprisingly, the longest essay in the book is about one of his closest friends, Donald Westlake; the next longest, after the title-essay which deals with several writers, is Block's memoir of working at the Scott Meredith Literary Agency, at midcentury hugely influential, particularly on crime fiction publishing in the U.S. and important beyond that, and employing not a few young writers (such as Block, Westlake, Evan Hunter and others) for such tasks as "reading fee" criticism of would-be professional writers' manuscripts, sent in to SMLA with the required fee; the standard operating procedure, set by Meredith himself, was to string the aspiring writers along and get as much repeat business out of them as possible. (The book is dedicated to Barry Malzberg, a slightly younger veteran of SMLA in various positions, including his current one of basically serving as the legatee of SMLA's remaining business.) A few details of Block's career differ from essay to essay here (not so very much, but the timeline of his first sale of a short story to Manhunt magazine is retold slightly differently in two accounts); in his concluding short essay, which touches heavily on the career of William Campbell Gault, Block  conflates a Damon Knight assessment of Gault's more or less adult sports pulp stories and his later series of YA sports novels...as good as the YA novels were, the pulp stories were better, because somewhat less self-censored (oddly enough, I read several of them in 1960s and '70s anthologies aimed at YA readers...but Gault had made a major name for himself as a YA novelist by then).

Block, having self-published the hardcover and paperback editions of this book along with the electronic form, has a few minor copy-editing bobbles here and there (there's a typo in the page numbers in the table of contents), and one does have to consult the headnotes to each piece to find the previous publication credits (no individual copyrights page), but these are not reasons to not consider picking this one up...and Block is liquidating his stash of the hardcover at Amazon.com while supplies last, $9.99 a throw (Amazon Prime members get shipping for free; the paperback edition, which will remain available, currently runs $14.99; though the electronic version runs a little less than five bucks and will also continue to be offered).

A fascinating read. I learned of it from Ed Gorman's blog, and promptly bought the Kindle version. I refer to it frequently. Especially enjoy (again and again) the piece on Those Scott Meredith Days.

If you haven't yet, you probably will enjoy Barry's memoir b lock recommends, "Tripping with the Alchemist"...

Thanks, Todd. I'll check it out.

Todd, thanks for reviewing this collection of his columns by Lawrence Block. These go back a long way, I suppose, and a volume is probably the only way I can read them. I have quite a few of his books that I intend to read one after the other, eventually.

I'd have to check around, though the Contento/Stephensen-Payne indices probably have an index of the first publication dates and cites missing from the prefatory matter in the book itself...a very few of the entries were written for projects that were never published, so this book marks their first appearance. So, Prashant, the eBook...if you have the right reader for it...might not be the least economical approach to reading this.

Sounds great - I'll see how easy it is to get a paper copy on this side of the pond (I assume it also has his pieces on what a sex maniac Ed McBain was ...) - thanks Todd.

I came to Block fairly late but have been making up for lost time.

When you create the post for this week, here's my review of The Last Coyote by Michael Connelly. http://carstairsconsiders.blogspot.com/2016/07/book-review-last-coyote-by-michael.html

My FFB for today - July 29 - is up. Here's the link in case you're in the process of collecting links now and haven't yet seen it: All for the Love of a Lady by Leslie Ford

Charles, I suspect you'll have rather painless catching up.

Mark John...thanks, As noted, I had distractions, sudden interruptions and the deletion of version 1.0...but I think it's turned out OK, if later than I wanted it to.