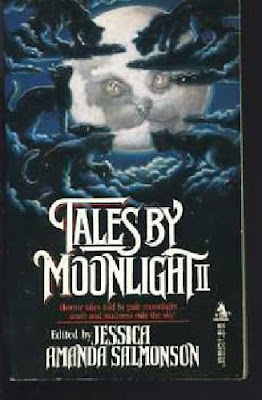 The following reviews reprinted, with minimal editing, from a longer column of mine in the third, January 1990, issue of the magazine (in*sit), edited and published by Mark Hand, Nancy Ryan, Donna Wilson, Jeri Mason and myself 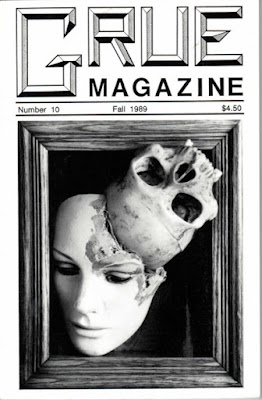 Jessica Amanda Salmonson's Tales by Moonlight II is not quite a direct sequel to the original anthology of a few years back; with this volume, she has done the valuable service of surveying and collecting some of the semi-professional or little horror and fantasy press. She offers 37 short stories and poems going back to Daniel Defoe's "The Devil Frolics with a Butler", published originally in pamphlet form by Defoe himself and seen therefore by Salmonson as part of a tradition that is currently represented by dozens of small-circulation magazines and book publishers, among hundreds with wider or different emphases (in her appendix, she lists 37 little-magazine contact addresses; a 38th is that of Janet Fox's small-press market-report guide Scavenger's Newsletter). A new translation of Theophile Gautier is included, and stories from such diverse a set of writers as Ramsey Campbell, John Varley, Nina Kiriki Hoffman, John Domini, Fox and Salmonson herself, along with H. P. Lovecraft (a very enthusiastic small-press person) and "The Eldritch Horror of Oz" by "L. Frank Craftlove" (Phyllis Ann Karr)--truly fierce. Salmonson also offers an historical survey as introduction  and Grue magazine editor Peggy Nadramia offers offers tips on starting a magazine of her own in another appendix). 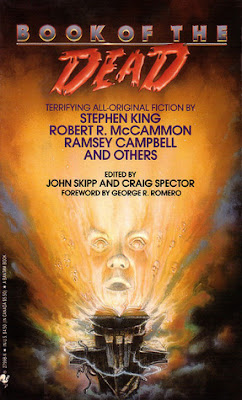 Splatterpunks...the name is derived from Gardner Dozois's coinage of "cyberpunks" to describe a group of writers who had begun seeing themselves as somewhat apart from other sf people, more aware of global concerns and the interplay of cultures, particularly on the street level, among people living on one or another edge of ever-more technologically-dependent societies. One of the loudest voices, John Shirley's, among this group of writers insisted they were "culturally on-line," with implications that others were not. Cyberpunk writers, particularly Shirley and the most popular of them, William Gibson, also can be prone to flashy writing, and graphic descriptions of the tougher edges of those societies; hence the newly graphic approaches to horror fiction, often featuring marginalized characters, seemed to have more than a little in common with cyberpunk [and writers as interested in branding themselves to gain a little more attention for themselves and their work]. Hence, David Schow's suggestion, splatterpunk: the work of John Skipp, Craig Spector, Schow, Shirley (the notable mutual member), Joe R. Lansdale [at times, though he hated the label and had no interest in being lumped in with it], Robert McCammon and Clive Barker. And with Book of the Dead, splatter punk has its first (as far as I know) all-original anthology, with Skipp and Spector as editors and stories by Lansdale, Schow, McCammon and such fellow-travelers as Ramsey Campbell and Stephen King. The whole thing [in those pre-ubiquitous zombie days] is a tribute to George Romero's Living Dead films, and all the stories involve zombies. Campbell's story is good, if a bit typical of his more sardonic work; sadly, the King is also typical of the worst of his work: dull, unimaginative, sloppily-written. The King and the one by Glen Vasey were unworthy of my time beyond their first few pages (the Vasey because those first few pages were so utterly vapid). But Schow, Lansdale and pop-culture historian and occasional fiction-writer Les Daniels serve it up just the way Joe Bob likes it: imaginatively and wittily cheesy, and tough. McCammon's story manages to be humorously touching about zombie love, veteran Ed Bryant manages to out-ugly the younger splats, and Douglas Winter's "Less Than Zombie" is devastatingly satirical of a certain work by B. E. Ellis (and by extension of similar efforts by McInerney and Janowitz) and the affectless young moderns celebrated by that work [this was before the no-better American Psycho]. The rest are at least interesting, even if Stephen Boyett's story tries that interest eventually; some of the authors, even given the premise of the anthology, might be too slavishly hewing to Romero's concept of zombies, as well. One of those stories, however, Philip Nutman's "Wet Work" [later the basis of a novel of the same title]  is a great knee-jerk  response story for any anti-establishment readers, as it's all about cannibalistic zombies at a certain Pennsylvania Avenue address... 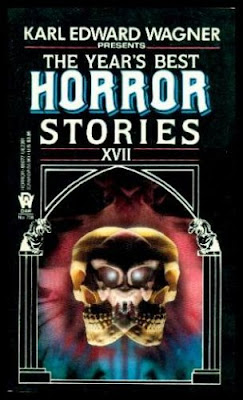 Another contributor to Book of the Dead, Nicholas Royle, came up with perhaps the most difficult (from the writer's perspective, not the reader's) story there, "Saxophone". He has another good piece, first published in the British anarchosyndicalist magazine Dig, reprinted in Karl Edward Wagner's The Year's Best Horror XVII: "One of Us" is one of two yuppie-horror stories in the Wagner volume, and it involves self-piercing enthusiasts (everyone's favorite marginalized group). The other YUP story, Ian Watson's "Lost Bodies", touches on animal rights; it's also one of four stories shared by the Wagner volume and Ellen Datlow and Terri Windling's Year's Best Fantasy (and Horror, as the subtitle reminds us). With the disappearance of Arthur Saha's Year's Best Fantasy annual series for DAW Books, the Datlow/Windling and the Wagner are the only widely-available annual American multi-source collections to emphasize fantasy and horror [something very much not the case any longer, even if Datlow flies on her own these days and Wagner is alas in what afterlife there might be]; at over 600 and 350 pages respectively, they are taking up the slack well. Wagner reminds us that this is his tenth volume of the series, which began as reprints of a British annual and came under Gerald W. Page's editorship for several years in the 1970s; for Omni fiction editor Datlow, 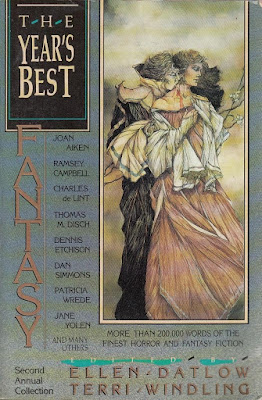 and Windling, co-editor of the Elsewhere series of anthologies and much else, their second volume compares favorably with their colleague's. The Wagner has stories by Harlan Ellison, Dennis Etchison, Nina Kiriki Hoffman and two each by Charles Grant and Ian Watson, and has more material taken from relatively obscure British sources; the Datlow/Windling features a different Etchison, one of the Watsons (as noted above) and one of the Grants, three stories by Gene Wolfe, and William Kotzwinkle, Daniel Pinkwater, Joan Aiken, Jane Yolen and Thomas Disch, among others, and features more stories from American sources that might be obscure to many fantasy readers.  Aside from "Lost Bodies", both books feature M. John Harrison's "The Great God Pan", Ramsey Campbell's "Playing the Game" and Grant's "Snowman", and all four probably deserve their placement in both volumes. Further, there's enough in both to make the dual purchase worthwhile, despite the Brian Lumley's  slightly stodgy "Fruiting Bodies" leading off the Wagner, and a weak Richard Matheson story and Edward Bryant's rather dispiriting "year in film" article in the other. The Lumley (from Weird Tales) [then newly revived for the fourth time, with that revival--theoretically, at least--still with us after a quarter-century] does feature some imaginative nastiness (Wagner, and Page before him, have shown much good taste in selecting from rather uneven or often bad writers; two of the best Stephen King stories I've read, for example, were among those selected for their annual). As for the Bryant (a brilliant fiction writer if somewhat dicy reviewer and media journalist): I suppose someone had to like the film Child's Play [still not me]. The only sad notes are struck by the obituaries in the Windling/Datlow and the notice in the Wagner that Charles Grant has grown tired of reading bad splatter imitations and so has decided to stop assembling his Shadows and Greystone Bay original-anthologies. In a column full [of also a number of other volumes and magazines than mentioned here], these two annuals might be your best bets--certainly for a broad sense of what horror (and associated fantastic fiction) offers today.


From the Contento/Locus/Galactic Central indices:

I remember reading Karl Edward Wagner's The Year's Best Horror XVII as soon as it was published. I couldn't wait for those "YEAR'S BEST" anthologies from DAW. I would also buy remaindered copies of Datlow and Winding's THE YEAR'S BEST FANTASY AND HORROR. Great series!

It was somewhat simpler to keep track in 1989/90...and I wasn't too upset when Stephen Jones and Ramsey Campbell tapped in with their annual...

Today's book from me was originally going to be Janet Fox's NOT IN KANSAS, but given everything, including catching up with the late details on the death of A. R. Morlan (who wrote the intro and was Fox's executor) early this year, it didn't get to happen...

Todd, I'm going to take this opportunity, through all this eye-catching covers of horror and fantasy, to wish you a very Happy Christmas!

Likewise! Though for me Xmas has about as much to do with me as Lohri might with you...do you celebrate any solstice festivals?

That is a pretty fair set of covers.

Thanks, Elgin...to you as well!

Todd, we celebrate Christmas every year though we also observe a string of solstice and harvest festivals depending on which part of the country you live in. I think some of our harvest festivals are equivalent to Thanksgiving. Lohri is mostly celebrated in January, in the northern state of Punjab, a Punjabi and Sikh state, and the neighbouring region. Many of our festivals, including Holi, the festival of colour, and Diwali, the festival of lights, are marked by bonfires.