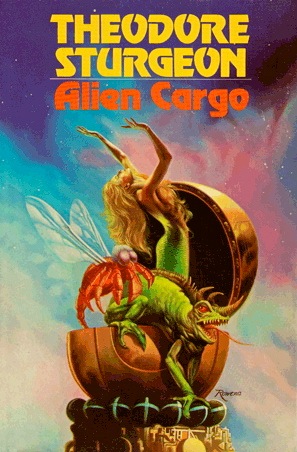 Theodore Sturgeon's other collections can all be considered to be superfluous, after the monument that was Paul Williams (and daughter Noel Sturgeon)'s The Complete Stories of Theodore Sturgeon set (Williams couldn't quite complete his work with the multivolume project, due to early-onset Alzheimer's after a traffic accident while bicycling) ...except there is something to be gained in trying to determine why certain stories were included by which editor...presumably Sturgeon (presumably with input from Bluejay editor/publisher Jim Frenkel), in selecting this cross-section as some of his best short fiction from the first two decades+ of his professional career, had some interesting reasons for putting together this set of stories, when such early collections as E Pluribus Unicorn and Caviar had also covered this ground (it shares no less than six stories with the latter, and six more with Sturgeon's first collection Without Sorcery, and perhaps was meant in some way to be a new edition of these books). Happily, Sturgeon provides headnotes to the stories as presented here, though as he was going into his final months, he wasn't as loquacious as with some of his earlier collections, including those for Bluejay and Dell publication over the previous half-dozen years. (And there have been collections published since, which hope to be more portable introductions to Sturgeon, and the potential for the small press North Atlantic to give up the ghost or at least the in-print status for the Complete Stories is not negligible.) Alien Cargo was the last new Sturgeon book published during his lifetime.

Here's what this book offers, from the Locus Index of anthologies and collections:

There are surprising and unsurprising inclusions and omissions here, even given the aforementioned collections of the previous five years (and the return to print of such books as E Pluribus Unicorn in that period). Any best-of the early Sturgeon not including "It" is simply wrong, and any not including "Microcosmic God" is bucking the nostalgic glow this story has for many...it's the One Story, written at the beginning of his career essentially, that too many people would continue to insist for decades afterward was the best story he would ever write...also simply wrong. (It's comparable thus to such other early hits as "Yours Truly, Jack the Ripper" by Robert Bloch, "Nightfall" by Isaac Asimov and "El hombre de las esquinas rosadas" by Jorge Luis Borges, aka "Streetcorner Man"--the Bloch not only hugely plagiarized, but also the story he was tagged with for general identification purposes till the film version of his novel Psycho appeared...all four writers have noted that in their correct estimate, they did much better work after learning a bit more about life and writing, which wouldn't stop the unclever from letting them know they'd peaked with near-juvenilia). 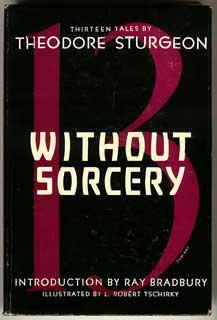 So, aside from a handsome if busy cover by Rowena Morrill, and a typeface used throughout the book which is too faint for absolute ease of reading, what we have here is something like, but not quite, a Sturgeon best-of his short fiction, despite a strong case to be made that either A Touch of Strange or E Pluribus might better represent his short work at its best; certainly the two together are at least as good a selection as this one is, and they don't include dozens of stories collected in the later best-ofs as well as those only available in the complete set.  "It" would be worth the purchase price of the book by itself, literally Sturgeon's masterwork, the story which demonstrated how he had gone beyond the flashily promising newcomer of his earlier work to a fully-formed artist; the last sentences will probably stick with me for several more decades, as they have over the forty-plus years since I first read them. And the introductory note to this one, one of the longer in the book, is also quoted in the appropriate volume of the Complete Stories, noting Sturgeon's surprise at learning how influential his story was particularly on comics artists and writers (characters running from the Hulk to Swamp Thing, and no doubt such more ridiculous creatures as the Heap, owed more than a little of their 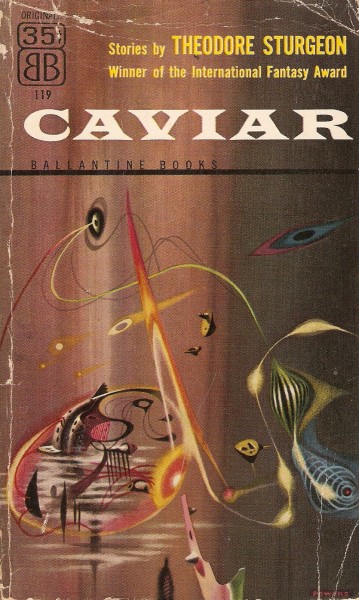 conception to the relentless, uncreated but utterly curious golem that is It in the story) and his gratitude toward Ray Bradbury, tasked with presenting Sturgeon with an award at the first San Diego ComicCon, unstintingly praising the slightly older writer and noting how much of his work was patterned on Sturgeon's. (Kurt Vonnegut and Stephen King being among the more obviously influenced by Sturgeon, as well, as both were happy to state...Vonnegut character Kilgore Trout has this name for a reason.) "Brat" and "Shadow, Shadow, On the Wall" remind me again that we could still use a collection devoted exclusively to Sturgeon's horror fiction, some of the best from a 20th Century writer never devoting most of his energy in that direction (putting him in the same class thus as Patricia Highsmith, Muriel Spark, Saki and Cornell Woolrich)...these not being on par with "It" or "A Way of Thinking" or "The Professor's Teddy Bear" but certainly worth gathering with those and the others.

There's barely a Sturgeon book not worth reading (I'm told that one might be the highly sought-after-by-collectors rush job/Jean Shepherd-instigated literary open hoax/joke that is I, Libertine, written by Sturgeon and Betty Ballantine under extreme time constraints in a marathon session, and published as by "Frederick Ewing" as a Ballantine Books offer), and this one has both Sturgeon's desire to preserve these stories together and his too-brief introductions to further recommend it. If you're still on the fence about investing in the Complete Stories...go check it out of a library...but you'll still have a fine time with an inexpensive copy (or less inexpensive one) of this collection. (Sturgeon's West being the most unlikely item, and quite brilliant, many of the stories in collaboration with Zane Grey Western Magazine editor Don Ward.)

I actually have a copy of ALIEN CARGO (and the set of complete THEODORE STURGEON) so I need to dig it up and check it out. I wish I'd bought more of those BLUEJAY BOOKS.

Some good material. A pity how Frenkel's career has been marred by various setbacks, some more his own fault than others. Of course, isn't that true of most of us...certainly me, certainly Sturgeon.

I've not read a lot of Sturgeon, other than MORE THAN HUMAN and a short story here or there as I happened across it. "Killdozer" was one such, but I can't recall others. I may try for a copy of this collection.

You could do worse, though the SELECTED STORIES would be better...as would the duo I note above, E PLURIBUS UNICORN and CAVIAR.

Todd, I certainly agree with what you said about surprising inclusions. I share your love of much of Sturgeon's work but some of these are far from Sturgeon at his best. I think "Poker Face" and "The Traveling Crag" are pretty poor and "Two Percent Inspiration" is awful, both as a story and as a satire. (And "The Traveling Crag" is also a terrible title.)

The more I think about it, the more this feels like an attrmpt to make a little bread for the ailing Sturgeon by indeed essentially repacking mostly chestnuts, from the two cited collections, which did mostly not get a new airing in the then-recent Dell and Bluejay collections...or the relatively recent reprints of the other notable short fiction collections by Jove, Pocket and DAW...CAVIAR and NMS had been out last in the mid-late '70s from Ballantine/Del Rey, but perhaps were more quickly sold out or put out of print than the other items....

I will have to seek this out - I actually though I had CARGO but just looked on the shelf - and there are 19 other Sturgeon books there but not this one! Thanks Todd, as ever!