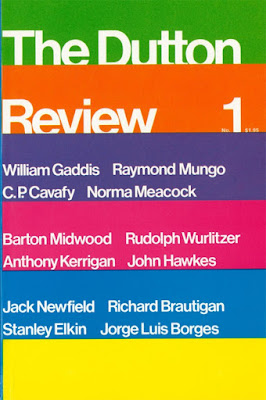 The Dutton Review got off to a good start and didn't get to go anywhere else; this was the only issue. And while E. P. Dutton had a lot to be proud of on its lists, they clearly weren't too interested in their women writers; even Managing Editor Susan Stern apparently couldn't convince them to publish more than one writer, Norma Meacock, with a novel excerpt, who didn't carry the XY chromosome.

Otherwise, it's a nice mix of poetry, short fiction (albeit as much excerpts from novels by William Gaddis and Stanley Elkin), Anthony Kerrigan writing on Borges to accompany the Borges story (translated by Borges and Norman Thomas di Giovanni, then in the midst of their project producing the best translations of Borges's work), Jack Newfield's critical survey of journalism, Rudolf Wurlitzer's "found poem" of sorts, and somewhat more traditional autobiography (also an excerpt) from Ray Mungo. There's a  brief editorial request that contributions be sent to a certain address, further suggesting  this was not meant to be purely a loss-leader and sampler of forthcoming work, but something along the lines of New American Review or New World Writing or New Directions (clearly missing the requirement that New be part of the title) or Works in Progress (the Book of the Month Club series that did somewhat more resemble, if not entirely, a sampler of recent offers). Probably a pity it didn't get to a second issue, nor a healthy run.

From the FictionMags index, slightly corrected:

Which reminds me, I have an anthology of three Charyn books on the TBR which it is about time I got to!

Came across this column and just had to say HI. I'm Charyn's partner and I know he'll get a kick out of it. Sergio, which three are on your TBR? I hope one is JERZY, a gutsy novel about the author of Being There and The Painted Bird. I know it's hard to keep up with Jerome - he's now writing a Teddy Roosevelt novel & his 12th Isaac Sidel comes out this fall. (Watch for coming news of an animated TV series, Hard Apple, based on those novels.) He's at JCpress@writemail.com --- Lenore Riegel

Thanks for letting us know about the projects at hand, and good luck with the HARD APPLE series--are your kids going to be in the cast or otherwise involved? (Riegel's adult children...and, I gather, grandchildren...are professional actors, with a stepdaughter a major film editor, and spouses of offspring who are an actor/director/writer and a cinematographer...all of whom have collaborated on a web sitcom, IMAGINARY BITCHES.)

I'm certainly a fan of Charyn's work, editorial and as a writer, and fwiw used to work at TV GUIDE. Before that, in the latter '80s and early '90s, I lived in Northern Virginia, in the DC burbs, but never did go to dinner theater there, thus missing the early performances of younger Riegels...

How wonderful to hear from Lenore Riegel about JC's work. My memory was playing tricks on me - the volume I currently have on the TBR is the Black Box edition of the Isaac Quartet (Marilyn the Wild; Blue Eyes; The Education of Patrick Silver; Secret Isaac). Great to hear a 12th is due soon :)

Sergio, you can't have a better intro to the Isaac Sidel thrillers than the four in original quartet - they'll be the focus of seasons 1 and 2 of Hard Apple. By the end of #11 "Under the Eye of God, Isaac is an 'accidental president and #12 "Winter Warning" will find him in the White House. Like a Trump or Frank Underwood, the intrigue & crime goes deep, but Isaac uses his weapons (like his famous Glock) for the greater good - at least as he sees it.

Todd, you sure did your homework. Wish we'd run into you at those dinner theatres. Where are you now? Write me at JCPress@writemail.com. We can catch up.