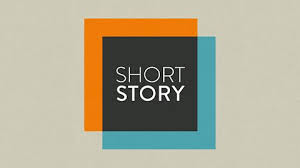 from the Locus Index: 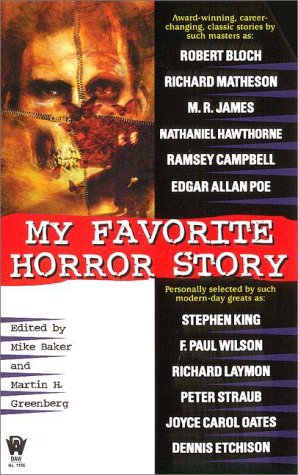 Here's a book I wasn't aware of till this afternoon, though if you'd asked me, I might've thought of a not altogether similar one edited by Steven Silver--also in collaboration with Martin H. Greenberg.  But in reviewing today Greenberg's solo effort My Favorite Science Fiction story, George Kelley mentioned this one in passing, so I looked into it on Archive.org.
As I noted in George's comments section, for reasons unclear to me the essays/introductions written by the writers selecting their favorite short horror fictions by other writers are all dated, on ISFDB, as if they were published or at least written in 1982, when the first edition of the book was published in 2000. As co-editor Baker died rather young in 1997, they probably were commissioned at least some years beforehand. Stephen King's short headnote to Robert Bloch's short story "Sweets to the Sweet" (one of two Bloch stories collected here, the only writer to get two inclusions aside from Bloch's mentor H. P. Lovecraft) was copyrighted in 1982, and Joe Lansdale's slightly longer entry for the other Bloch story ("The Animal Fair") in 1985...so they might've been put to other purposes, but no previous publication credit is present in the book or online indices. Curious.
The book's unsigned introduction, which I will guess was primarily if not entirely the work of Baker, doesn't start well: "Of the three main subgenres of popular fiction, horror is often considered the most recent as a viable literary form in its own right." There are any number of subgenres among genres of popular fiction, and they don't usually restrict themselves to popular fiction, if by that we mean fiction which is not attempting to be lasting art. Who is considering the recent advent of horror standing alone? And how little-informed are they? Most of the rest of the essay is about how wrong this posited attitude is...which would be fine, if anyone who wasn't simply trying to judge by whether bookstores had horror shelves or not was jumping to those supposed conclusions.
And the quality as well as the length of the blurbs to essays from the selectors varies from writer to writer within, if all are better than the introduction. They usually don't worry too much about a dichotomy that I often raise, between the otherwise similar fields of "realistic" suspense fiction and fantasticated, supernatural horror, though Joe Lansdale in introducing the second Bloch story makes a point of "The Animal Fair" having no supernatural elements, if (as he doesn't quite say) a slightly unlikely fate for its least lovable character.  (If I were choosing the best horror story by Bloch, "Sweets to the Sweet" would rank pretty high for me as well; I can say more definitely that among his outre suspense stories, I'd plump for "The Final Performance" as even more hardboiled.)
It's the stories as well as the essays that make the book, and aside from such chestnuts as the Poe (Joyce Carol Oates makes a professorial case for it), the Hawthorne (Rick Hautala notes that New Englanders are in the house), the Bierce (Dennis Etchison rediscovers the primary model for his own literary approach), and the Lovecrafts--if you haven't read these, you're mostly in for a good time, though not a few will be pulled up short by aspects of the HPL stories these years, and they are the least of the all but ineluctable classics gathered--and you are unlikely to suffer through such stories as probably Richard Matheson's best shorter work (and definitely not horror per se), Hirai/"Rampo"'s most famous story as translated, at least, and one of Philip Dick's most loved (if that's the word) of his few fairly straightforward horror fictions ("Upon the Dull Earth" is my slightly less-famous preferred story in this wise, but Ed Gorman makes a good case for why this one is his, and what it might've been inspired by, in part). The only story here I've missed previously (and it took some effort on my part to do so, given the various anthologies and colletions it's appeared in since initial publication) is Dennis Etchison's "The Dog Park"...and I'm going to dip into that one now.
So, thanks to George and all the writers and writer-selectors for this volume (far too many lost since this book was published), for some good memory jogs and useful new perspective. Please see Patricia Abbott's blog for this Wednesday's other short story citations, including Patti's own selection of the formidable writer of horror and more, Elizabeth Bowen. 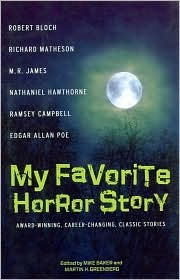 It's strange that only two stories came from WEIRD TALES and that other authors from the Weird Tales gang were not represented. For the most part, WT seems to have been bookended with the more modern or current authors -- perhaps indicating that the genre has made some giant steps since the old WT days.

Well, Jerry, a whole lot of those who helped inspire the WEIRD TALES writers were tapped instead, and not a few (including Richard Matheson, who was almost as much a WT writer as Joseph Payne Brennan, both rolling in at the very end of the magazine's first run) who worked alongside the first iteration of WT...I get to wonder when this book was actually put together, as I chew over above...but, yes, indeed, horror didn't stop (and certainly suspense fiction didn't stop) with the folding of the Unique Magazine in 1954. (And all the revivals since.) Frankly, I wouldn't be surprised if the younger writers weren't first exposed to the British writers ahead of the WT crew, and had early memories as described in the book shaped that way...certainly F. Paul Wilson, like myself, was a twig bent in notable part by Robert Arhur and others' ALFRED HITCHCOCK PRESENTS: volumes...one of Harold Q. Masur's introduced us both to "The Distributor"...

Patti--It is a good concept for an anthtology...this isn't the first volume (nor even the second after the sf one!) to invert the even more common "pick your own best story" request, but it certainly is a good example except in the oddly self-contradictory book's introduction.

Thank you for your kind words about MY FAVORITE SCIENCE FICTION STORY. I have a copy of MY FAVORITE HORROR STORY around here somewhere, but your superlative review makes me want to give up the search. I did find a copy of MY FAVORITE FANTASY STORY which I'll be reviewing for Patti Abbott's WEDNEDAY'S SHORT STORIES on February 10.

I wonder if there's someone out there collecting all the DAW books. Or all of Martin H. Greenberg's anthologies.

I remember that I really liked Elizabeth Bowen when I was in high school and wrote a paper on her book, Ivy Gripped the Steps. Thanks for the reminder! Hadn't thought about that in years.

Patti's comment was accidentally erased when I was removing an infestation of spam comments dumped on my blog over the last day, and apologies for that.

Close approximation to what she wrote: I'm always interested to see a selection of people's favorite examples of...whatever literary (or other) work by others might be.

My comment in reply to George and Jack has now disappeared twice, as I cleaned out some spam attacks from a persistent cuss (or cusses).

So, as previously noted:
Glad to be of service, in this small manner, Jack!

Too kind, George...I'll look forward to your take on MY FAVORITE FANTASY STORY, and for that matter on any comment on HORROR you choose to make. There definitely are people who are completist collectors of DAW Books and of Greenberg anthologies...I think the former have an easier time of it!

Todd, just send me (kelleyg@ecc.edu) the address you would like me to mail WOODSTOCK 94 to and I'll put it in the mail to you as soon as I can.