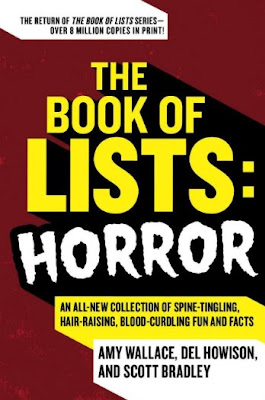 Another rare instance of my introducing into this series of reviews a book that is still in print, but has been pretty widely ignored, in part because it's not first-rate, and in part because if falls between stools...it's not exlusively about horror films and television, sadly a much more popular topic for a nonfictional book than is horror fiction (for horror films tend on average to be more popular than horror fiction), and it's not a scholarly tome at all (though some scholarship is behhind it), nor is it quite as useful or amusing to go through as the 100 BEST HORROR BOOKS essay collections Kim Newman and Stephen Jones have put together. It's instead another of the recent spurt of Wallace Family attempts to expand the brand of THE BOOK OF LISTS volumes that they were so successful with in the mid-late 1970s, as a spinoff from Irving Wallace's onngoing THE PEOPLE'S ALMANAC project. I certainly dug THE BOOK OF LISTS back when, a product of the Wallaces and Amy's brother, Irving's son David Wallechinsky (he reclaimed the name stolen from the family at Ellis Island), who was also the coauthor of the interesting WHAT REALLY HAPPENED TO THE CLASS OF '65? (written with classmate Michael Medved, he of the whining about the downfall of our culture and often justifiable derision of bad films, who with his brother Harry had another family/publishing industry brand with THE GOLDEN TURKEY AWARDS).

So, this book, produced by sincere horror fan Amy Wallace with actor and bookseller (and now celebrity anthologist) Del Howison and writer Scott Bradley, leans too hard in the direction of easy top-of-the-head lists from too many redundant lightweights, but also allows a few contributors to dig a little deeper into various canons. It leads off with 217 pages of film lists, followed by less than a hundred of literary lists...and so on...all told, fine bathroom reading, and excellent bus or airplane reading (the disruptive circumstances of travel won't distract you from much subtext here!), but not quite as engaging as the wide-ranging (if similarly uneven) original BOOK OF LISTS, nor quite as much of a consistent joy as the two science-fictional Books of Lists produced circa 1979 by more "insider" folks and for more "insider" audiences. However, this book seems to have passed through the literary/commercial mills with even fewer reviews and less attention than most non-books, and it's good enough to deserve better than that.

Some things belong dead (god, I hope it's not the Scott Bradley I know, the PRICK!).

I've not had the pleasure, but I suspect you as a NeConite might've. I wondered if anyone might take that meaning of "falling between stools," but in my DayQuil'd state no less reinterpretable phrase came to mind. (And, goodness, the typos...fixing now.)

Well, thank the gods I've never had to see him at Necon -- bad enough spending a semester with him. I did have a friend offer to "get the lads round to set him straight" -- almost wish I'd taken him up on it.

But that is the past. Hope you're less Dayquilly and thus more well (that's a grammatically suspect sentence, eh?).

I love books like this that I can browse through. I'll pick up a copy.

First off, I want to thank Patti for the thoughtful and even-handed though mixed review of the book.

Secondly, to K.A. Laity - I promise I'm not the Scott Bradley you apparently had some problems with. I don't recognize your name, and I checked your profile and it doesn't look like we would have ever crossed paths.

That's not to say that I'm not a prick, I just don't think I was the Scott Bradley who was a prick to you. =)

Wow. Just seeing this for the first time. Glad the mixed nature of the review didn't spoil the day n any way...hey, you got the book out!