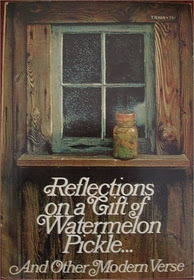 As a young reader in the 1970s, particularly one who began 1st grade in 1970 and was reading essentially only adult materials by the end of the '70s, it both is and isn't remarkable how much of my reading in the earlier years of the decade was driven by Scholastic Book Services and in a strong second place, by Dell Books, particularly with their Yearling and Laurel Leaf lines...these were the default sources of books in grade-school classrooms and the other not-quite libraries that dotted the suburban public schools I attented in that decade (the Enfield, Connecticut school had a bathtub full of cushions among more conventional chairs in its own nook in a hallway, that kids, wild dreams of freedom for elementary school kids today I gather, could be excused from class to go crash in and read books from spinner racks (a few Harper Trophy titles and similar items mixed in with the Dells and Scholastics there).

And while I was introduced to poetry by my earliest reading, Seuss and Stevenson's A Child's Garden of Verses, in its odd Little Golden Book edition, among others, and certainly would come across poetry in my reading texts and in my recreational reading (not least Poe, of course, but also the likes of Stephen Vincent Benet), the first four poetry anthologies I owned were three from Scholastic (their edition of Reflections on a Gift of Watermelon Pickle, pictured above, a collection of modern verse; the largely but not exclusively older work in The Charge of the Light Brigade and Other Story Poems, and one which I have buried in storage but can't find a reference to online, with a title very like 100 Great American Poems) and one Dell Yearling edition (I Heard a Scream in the Street, a collection of poems by children, mostly urban kids, illustrated with photos by students, edited by Nancy Larrick). They gave me a grounding in the art, and a good sense of the range of what was possible in the form...and more Benet, and among my first exposures to William Stafford's work, among others. 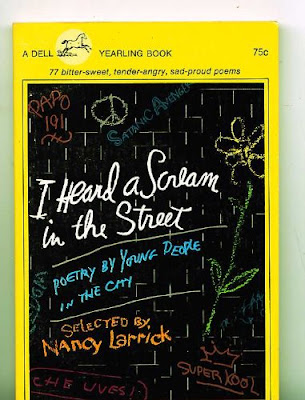 I have to wonder if anyone else remembers that 100 American title better than I do...

For more Friday Forgotten Books, please see Patti Abbott's blog for a list of all the participants in this weekly review.

a little skimpy on the comments on this one, Todd!

A bit more wordy now (sometimes I check to see how the image will look on the final post before I have the text ready). Thanks for checking.

When I left that one, you hadn't put any comments in yet, Todd, so I was being - surprise! - sarcastic. Now I'll go back and read your golden words.

I had quite a few anthologies of poetry for kids but can't remember which.

Despite cointinuing to enjoy good poetry as I find it, I've gathered rather few anthologies since...a few more single-author collections (nor have I ever subscribed to POETRY or the local AMERICAN POETRY REVIEW).

Well, apart from my oft-mentioned SHRIEKS AT MIDNIGHT, I can't recall poetry being much on my radar. I guess early on it was prose prose prose with me. Surely there must have been some, but for the life of me nothing comes to mind. All wee kids books seemed to rhyme and Seuss was everywhere there. Hmmm.

That was one of the advantages of the easy-reader Grimm's: the only rhymes were the traditional ones of incantation. I've always been more prosaic, myself...

I remember reading some of those Laurel poetry collections when I was a kid. I'm guessing DELL doesn't publish them anymore.

That's a good question, George...the Dell imprint of Random House (given the Hitchcok anthology connection, an odd fate for Dell after its absorption into Bantam Doubleday Dell some years back) did have some Laurel editions out in the last decade or so...the Laurel edition of Baldwin's GO TELL IT ON THE MOUNTAIN was one of the last holdouts, perhaps...but even such books I read early on in Laurel Leaf mass-market paperbakcs as the collection of Native American myths and folktales THE STORYTELLING STONE was last issued by Dell apparently as an oversized Delta paperback. Was one of those you read , Dell LC130 (The Laurel Poetry Series)?

That's odd...Blogger vanished the title of the book in my last comment, which is _Poetry: A Modern Guide to Its Understanding and Enjoyment_...

I have a book called 100 AMERICAN POEMS or 100 GREAT AMERICAN POEMS. Would you want me to check its contents? It's an old paperback, forgot the publisher. Signet?

Word Verification Word: uneek. Is that something horror actors are required to do when they have been overacting?

Thanks, Juri...If it's a Signet book, and not in the digest-magazine format, it isn't the Scholastic book I have in deep storage. Part of the problem in finding it online, I think, is the rather generic title.