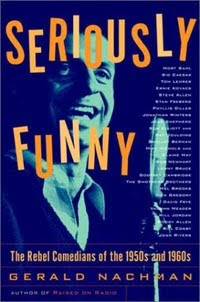 Seriously Funny is a book that did its job well, not perfectly, but well—pop culture historian Gerald Nachman’s survey of the “new comedians” (not solely in nightclubs, though nearly all did some time in those venues) of the US in the latter ‘50s and ‘60s, ranging from Lenny Bruce and Mort Sahl and Shelley Berman (of course) to Nichols & May to Tom Lehrer to Jean Shepherd to Godfrey Cambridge to Stan Freberg to Vaughn Meader to Joan Rivers. Chapters devoted to Jonathan Winters, Dick Gregory, Bob Newhart, Phyllis Diller, Bill Cosby, Woody Allen, Bob & Ray, the Smothers Bros. Fleeting or extended references to Redd Foxx, Allen Sherman, Mad magazine and its extensions, Second City and its extensions, Lord Buckley, David Steinberg (folks who might’ve warranted chapters, but Nachman gives chapters essentially to the folks he’s interviewed over the years). Unlike, say, Albert Goldman, Nachman’s not looking for all the tawdry he can find, but it’s hard to deal with Bruce, Winters, and many of the others without going into their hard times…and the obsessions that pulled Gregory and Sahl (among others, but they most obviously) out of comedy to one extent or another, among the interplay of other events that these “rebel” comedians helped spark and those which messed them over—as Lenny Bruce reportedly announced from the stage on the day after John Kennedy’s assassination, “Vaughn Meader is screwed.” (The First Family album JFK impressionist didn’t quite lose his career overnight, but close.) Well-written, not exhaustive but inspirational (a number of books, particularly about chapter subjects here or the next generation of innovative comedians, soon followed and continue to appear) and out of print in both hardcover and paperback, though available secondhand and electronically from a number of vendors…how things go in publishing today, despite respectable sales (even with the paperback edition coming from a shortlived house, and Pantheon having its own problems not long after this book’s release). Worth having.

I picked this one up on your recommendation some time ago, and it's everything you say it is.

Now this sounds great. I know very little about most of those comedians. Or any, to think of it.

This one does sound good. I like about half, maybe two thirds of the comedians you list, though I doubt I'd pay much to hear any of them on stage if I could go see them (as in their prime) tomorrow. Well, maybe.

Thanks for the review, this is one I'll sort of keep an eye out for without making a big effort at it.

Worth the look at the library, too...Nachman makes good points about, and reminds us of the better work of, comedians who have allowed themselves to drift since their early years (Rivers is a good example here). As several reviewers noted, he also lets these eminently verbal folks speak for themselves to a commendable extent.

Glad I steered your right, Bill. And, thanks, folks.

I need to get this one!