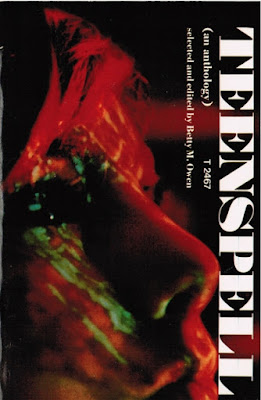 The Scholastic Art and Writing Awards...among the training programs for the young creative and/or intellectual aspirant, there have been worse batting averages. Actress Frances Farmer won for an essay in 1931; the next year, Robert McCloskey and Bernard Malamud were among the winners, after the founding of the contest in 1923; in the period of 1954-1956, awards went to Roger Zelazny, Robert Redford, Peter Beagle, Joyce Carol Oates, Peter Steiner; Redford's award was for a painting. (Earlier in the decade, Alan Arkin won with a sculpture; the next year, abstract filmmaker Stan Brakhage won with a short story.) 1947 was a bumper year: Edward Sorel, Sylvia Plath (rather less traumatically than her Mademoiselle win); Langston Hughes was one of the judges. And Scholastic has published with fair frequency collections of the awarded work, though in the 1970s the volumes weren't annual as they have been of late, after the 2005 folding of Literary Cavalcade, the flagship Scholastic Magazine (albeit one of a handful) for the awards for a half-century.

Betty M. Owen edited two of those volumes from the 1970s, this one collected work from the turn of the decade, and it demonstrates a lot of promising work. Not any of it first rate, but there are glimmers of what these youngsters will eventually be able to do, if they kept at it...Joyce Maynard, perhaps the most consistent award-winner in the contest's history (picking up an award for every year from 1966-1971 except for 1969; Stephen King won in '65, Carolyn Forche in '67), offers the best single story here, "Do You Wanna Dance?"; she gets her New York Times Magazine essay and extended date with Salinger in '71, and goes on from there. Most of the fiction, essays and to some extent the poetry is reminiscent of what Joanna Russ once described in a critical essay as one of several species of mechanical rabbit...those by young amateur writers being rabbitoids with pieces obviously missing, but put together with endearing earnestness. And occasionally there's a telling line, such as in Michele Kitay's "Wings" (about a younger college-student son visiting his aging parents on their farm after the elder, farmhand-by-necessity son was killed in an accident), at their first reunion dinner together: "Everywhere you looked, there was that empty chair." Aside from Maynard, I'm not aware of any of the 1967-71 contributors to this volume (Forche is not included) having had a sustained literary career (though Kitay might be the Kitay listed in LinkedIn).

The Russ essay appeared in the special Damon Knight issue of The Magazine of Fantasy and Science Fiction, which is about as good as transition as there is to considering the second collection of Algis Budrys's similar review essays for that magazine; Russ was stepping away from F&SF reviews at this point (though she'd return with four columns in 1979-80) even as Budrys was coming out of retirement from his half-decade of Galaxy columns in 1970 to begin his decade and a half as a Knight-influenced essayist for this somewhat less unstable magazine (F&SF continues publishing today; Galaxy folded, with weak attempts at revival to follow, in 1980).  David Langford and Greg Pickersgill, the proprietors of Ansible Editions or at least the joint presenters of this project with help from several others, did us all a great service in taking on the project of reprinting all of Budrys's F&SF review essays, in three volumes titled in recognition of the collected Galaxy essays, Benchmarks: Galaxy Bookshelf (SIU Press 1985).  Budrys, in a footnote:

'There was never such a thing as one "pulp fiction"; the standards of fiction would vary from medium to medium and genre to genre and sometimes from issue to issue, and the famous hack of folklore has been vanishingly rare, but never mind; if we don't simplify these matters, we'll be here all day in the hot sun."

Re-reading these, since I would read them as they appeared in the magazine, is revealing in part because of how much they nudged my own thought along, how much his challenge to all sorts of conventional thought about speculative fiction and all sorts of other matter suited me down to the ground.  You can see the beginning, in this volume, of what drew the Scientologists to hire him to administer the Writers of the Future contest and edit the anthologies from it (Budrys, who was never afraid to note how popular if not always good Hubbard was as a writer in the 1940s, took the opportunity to review together the new, deeply-flawed novels by Hubbard, Asimov  and Clarke--Battlefield Earth, Foundation's Edge and 2010: Odyssey II--and noting how their flaws and strengths were more similar than one might at first think)--among the most controversial things Budrys did during his career, even if it can be seen as taking some of the CoS's money and putting it to a useful (and Scholastic-esque) purpose. (The first Writers of the Future anthology featured the fledgling writers Karen Joy Fowler, well before Sarah Canary much less The Jane Austen Book Club, Nina Kiriki Hoffman and David Zindel, among others; Budrys didn't shrink from describing its assembly in one of the columns.) Conversely, younger hands such as George R. R. Martin and Stephen King have their work similarly sapiently anatomized and assessed, as do the then very new, such as Zoe Fairbarns, and the not so new at all, including particularly useful essays on the memoirs of Lloyd Arthur Eshbach and Jack Williamson, and a then-new translation of Zamaytin's We that marked a vast improvement on previous attempts. (Because her review was appended to one of Budrys's essays, the YA lit specialist and then associate editor of F&SF, Anne Jordan, gives us a fine review of  a notional volume by Hildebrandts mixing fantasy illustration and some fictional content with cookbook recipes.) The third volume, Benchmarks Concluded, carries some of the last, relatively tired columns written when Budrys was feeling the burn-out that had also afflicted him while turning out the last Galaxy columns, but not so much here, when his essays were appearing nearly every month and at times last such length as to make this one of these essentially 250ish pp. volumes the one which covers the shortest period of time. They are frequently brilliant, and one can mostly regret not being able to ask Budrys the next question when he is just a bit vague (when so, usually intentionally so, though not always--these were written to publishing deadline) or referring to something just a bit beyond the periphery of the eyepiece he provides. They are always worth reading. 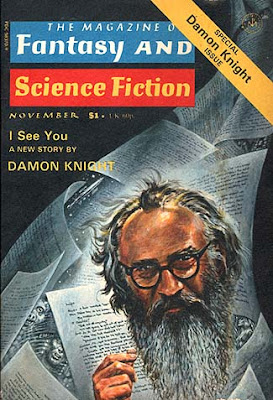 For that matter, one might as well make note of the November 1976 Damon Knight issue of F&SF for its totality, with its brilliant Knight story (and appreciation by Theodore Sturgeon), fine and notable stories by David Drake and Russell Kirk, a solid L. Sprague de Camp, and another of the series of stories by Philip Jose Farmer purporting to be written by Kurt Vonnegut characters.

Everyone's more prompt than I am with their reviews at Patti Abbott's blog. 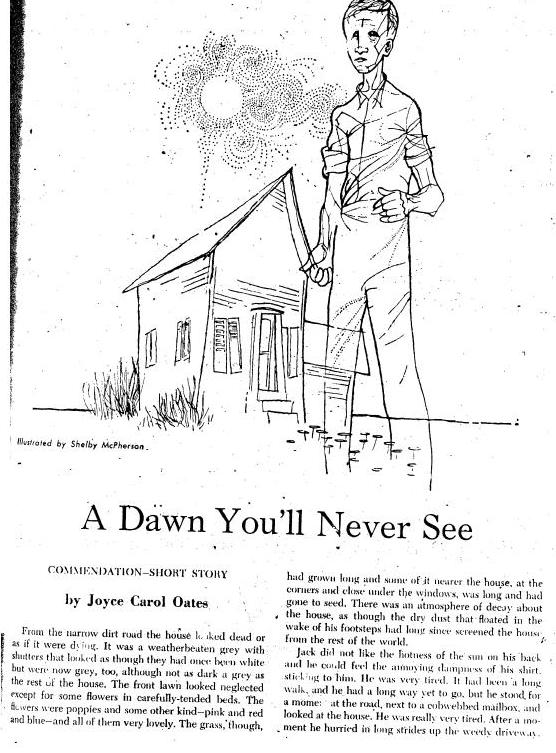 I find that less surprising, particularly given the fiction that's in TEENSPELL, than some of the media some of the others were cited for...Updike won for a cartoon ...King achieved fourth place in his year, with "Man of Straw"; not a story he's allowed to be reprinted, apparently.

Fascinated to read about some of the famous winners - and thanks for taking shall we say an askew look at Budrys, very welcome indeed. Thanks as ever Todd.

Well...I'd say my take on Budrys is that he was a genius who made a bit of a deal with the unsavory...which, unfortunately, most of us do to one extent or another, to do (in his case here) something worthwhile with the money they were going to spend anyway. I've certainly worked for either Rupert Murdoch or K-Mart for too much of my career (even if only a year or so of K at Borders.) The tendency now is to minimize his work all too much because of the association with Writers of the Future...certainly in the UK, where the Bridge Publications folks were so obstreperous in their dealings with the SF community. He also bought my first story, in a magazine he founded and ran on money he'd been paid for his effort, TOMORROW...and a pretty good magazine it was. My story was in the same issue as Harlan Ellison's...somebody who was willing to set aside his grievance with Budrys for that purpose...

Neat to see the names of some of the writers recognized in their youth. No wonder they're good at what they do—they've pretty much ALWAYS been doing it.

Well, tendencies will tend to out early, and some will be channeled thus, particularly by a proud teacher, perhaps looking for an attaTeach and almost always just looking for a win-win. I'm most impressed, to some extent, by those who were at least striving or effectively dabbling in arts rather different from the ones they made their career in. Brakhage never made a film with a narrative, as far as I know...even though he was as much critical theorist as filmmaker per se...and Alan Arkin wrote not only scripts and improvised sketches at Second City, but wrote short stories for GALAXY, at least. Apparently, John Updike's ambition as a teen was to be a cartoonist (and in the worst sense, in some of his fiction, he unfortunately succeeded).

From FaceBook:
Gregory Feeley:
I remember thinking that Damon's story, "I See You," was much better than the short stories that won the Nebula and the Hugo that year.

Todd Mason:
Nebula--didn't make the final ballot, insanely:
"Back to the Stone Age" by Jake Saunders
"Breath's a Ware That Will Not Keep" by Thomas F. Monteleone
"A Crowd of Shadows" by C. L. Grant (***winner)
"Mary Margaret Road-Grader" by Howard Waldrop
"Stone Circle" by Lisa Tuttle
"Tricentennial" by Joe Haldeman