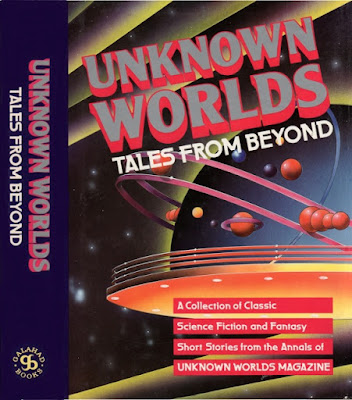 It's remarkable, as I've noted here some time back, that there's never been an anthology taken from even the original run of the magazine Weird Tales (1923-1954), much less its revivals additionally, that can said to have been definitive...though there have been some game tries, and any large anthology from the magazine tends to be impressive at very least in parts, even if the thin paperbacks ghost-edited by Sam Moskowitz and credited Leo Margulies are less so (with the rather good exception of The Unexpected, not packaged as a WT antho and possibly not edited by Moskowitz).  But contrast this with the fate of the legacy of the most fondly-remembered US fantasy magazine of the pulp era 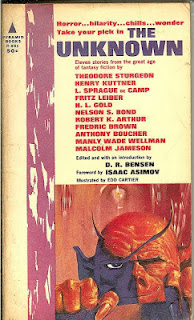 after or perhaps even alongside Weird Tales, Unknown, in later issues Unknown Worlds. D. R. Bensen, editor at Pyramid Books in the early '60s (the publisher's editor and publishers of the Margulies/Moskowitz WT volumes), published two widely-read anthologies, The Unknown (1963) and The Unknown 5 (1964), and in the UK George Hay had as his first published fantastic-fiction anthology a similar draw from the magazine entitled Hell Hath Fury (1963), after Cleve Cartmill's included story. Today's book, published as an "instant remainder" in two separate editions by different discount publishers, was the second attempt at mining the thirty-nine issues of the magazine to be edited by Stanley Schmidt, after his slimmer anthology called simply Unknown, for Baen Books, published at nearly the same time, in 1988, and perhaps a better and certainly a complementary selection. And for selections exclusively from one of the most influential of magazines devoted to fantasy, that appears to be all published so far, unless we count From Unknown Worlds, almost a special issue and best-of which Unknown publisher Street & Smith released in 1948 to see if a revival of the magazine, which been folded in the face of WWII paper shortages, would be fiscally viable (S&S, as Walker Martin reminds us in the essay linked to in comments, was already about to dump all their fiction magazines by the next year anyway, in favor of focusing on such women's "slick" magazines as Charm and Mademoiselle and other nonfiction titles; I suspect they kept Astounding SF exclusively because they wanted to have a reason to retain John Campbell, whom they might've wanted to edit another potential relaunch of Air Trails and Science Frontiers, albeit his first stint at that project was short-lived [1946-48]; Frederik Pohl notes as much here) . This despite such survey anthologies as Terry Carr and M.H. Greenberg's A Treasury of Modern Fantasy and, even more. a volume called The Rivals of Weird Tales being also in large part, though by no means exclusively, devoted to collecting Unknown's fiction. Considering that there has been only one anthology drawn exclusively from its rather impressive 1950s imitator, Beyond Fantasy Fiction, perhaps this shouldn't be too surprising, this relative neglect, but given the towering reputation of the magazine, it remains a bit odd. 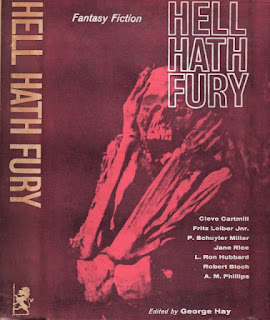 Unknown Fantasy Fiction was launched in 1939 as a second magazine edited for Street & Smith by John W. Campbell, Jr., who had been editor of Astounding Science Fiction since 1937 and was just beginning to come into his own as an editor; some of the best and most influential writers to work closely with Campbell, including Theodore Sturgeon, Fritz Leiber, L. Sprague de Camp, Robert Heinlein, Isaac Asimov (who was always quick to note that he wasn't all that prominent in his earliest career), Lester del Rey, A. E. van Vogt, Henry Kuttner and Catherine L. Moore (soon to be collaborative on all their work), and others had either been introduced or first started publishing with Campbell in 1939; Campbell, like some of his key contributors (such as Sturgeon, Leiber, Alfred Bester, L. Ron 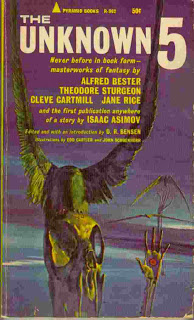 Hubbard in his less controversial years and such now relatively obscure writers  as Jane Rice), often seemed to enjoy offering, even more than their sf, the kind of rationalized contemporary (or "low" or latterly "urban") fantasy--fiction with only a few intentional deviations or even only one fantasticated element in an otherwise realistic context--that the magazine specialized in, particularly in its horror and Thorne Smith-style less-grim content (reminiscent of H.G. Wells's prescription for only one miracle per story). Though the magazine also published some "high" or epic/sword & sorcery fantasy, particularly in some of the contributions from Leiber, whose hugely influential Fafhrd and Gray Mouser stories were first published there, and in historical or folkloric fantasy by the likes of de Camp  and Fletcher Pratt (both notable for their historical fiction and nonfiction in other contexts), and to some extent Hubbard, with his "Slaves of Sleep". 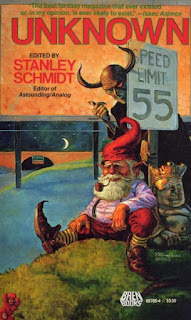 Of the handful of Unknown anthologies, this one might be the closest to definitive, though in part because it features perhaps too many of the same stories that particularly Bensen had selected for his books...and overlooks some of the most key stories published by the magazine, such as Fritz Leiber's "Smoke Ghost" (which Algis Budrys wasn't alone in crediting with essentially inventing the urban fantasy mode)...perhaps because Schmidt had included that story in his earlier anthology. A number of the stories included here are (deservedly) chestnuts of fantasy-fiction anthologies, such as de Camp's "The Gnarly Man" (which just Barely could qualify as science fiction, if one squints, and thus might justify the cover banner on both editions of this book claiming that it features "classic science fiction and fantasy") and Sturgeon's "It" and H. L. Gold's "Trouble with Water". This anthology, even more than the others from the magazine, also demonstrates how many of the writers at the heart of Unknown were also contributors to Weird Tales, even if some of them, like Sturgeon and Anthony Boucher (and once, notably, Heinlein) began contributing to WT after Unknown's folding, and new WT editor Dorothy McIlwraith's openness to this kind of story. But this anthology features notable stories by Robert Bloch, Manly Wade Wellman, C. L. Moore, F. B. Long and such widely-publishing writers as Fredric Brown, Robert Arthur and Jack Williamson. 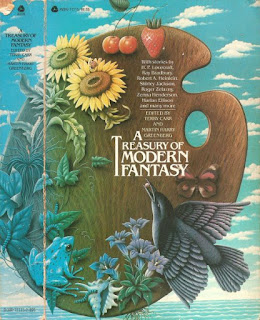 This is, at least, a fine introduction to the fiction from the magazine, but the lack of a substantial introduction or headnotes to the stories (a rare lack in a Greenberg anthology) make it less useful for new readers to orient themselves or understand the context in which the magazine was published, something that Bensen's anthologies do remarkably well. And, for good or ill, it won't take as long to gather and read through all the books drawn from Unknown as it does for Weird Tales, The Magazine of Fantasy and Science Fiction or even Whispers... 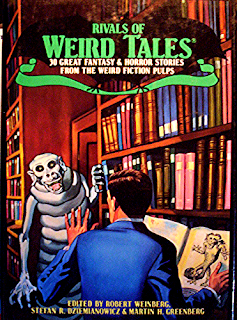 So many great stories in this one, Todd. My personal favorites are the Wellman and "The Bleak Shore," but only the narrowest of margins. I was also glad that Schmidt chose to include two stories by Leiber, who is certainly deserving of that honor.

I'm very glad to see your review; this is one of my favorite anthologies. I'm not sure I remember correctly but isn't "Greenface" also on the cusp of science fiction?

Jerry--two each by Leiber, Sturgeon and deCamp seems only reasonable. If I had to pick a single favorite story in the book, it might still be "It"...

Steve--yes, arguably...and, of course, Schmitz is one of those writers, like Randall Garrett and all those who indulged Campbell's pseudoscientific enthusiasms (mostly "psi" powers), who frequently ran along the edge of fantasy in his contributions to the "hard sf" Analog.

For more on UNKNOWN see http://mysteryfile.com/blog/?p=29323

A fine essay, Walker, and I was glad to read it again...Gerry de la Ree got me hooked on collecting older magazines as well. I see that we are both unaware of any other compilations of Unknown fiction beyond the arguably six cited above (unless we count the few collections by single authors taken from the magazine, including one famous pair of novellas). Remarkable, isn't it? And none of them in print.

UNKNOWN WORLDS is a great anthology! They don't make them like that anymore!

I had the Pyramid paperback you show, bought it for the cover, actually, but like what I read. Another of those I got rid of but wish I'd kept. But then now I'm getting rid of books again....

Simply too much of a muchness? I'm packing and repacking books from my old apartment at the moment, and reacquainting myself with books, magazines, albums and such I haven't seen for five years. Perhaps some should be sold. Sigh.