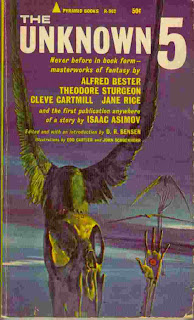 This fine and somewhat influential collection is for several reasons newly, sadly relevant...it has a cover and a new (in 1964) illustration by John Schoenherr for the previously-unpublished story in the collection, the Asimov...but the other illustrations were from the pages of the original story appearances in Unknown and (its later title) Unknown Worlds, by the recently late (in 2009) Ed Cartier. (In fact, Schoenherr, best known for his Dune and other Analog and wild animal/landscape painting, is the only living contributor to the book.) (When Pyramid was bought in the latest ‘70s by HBJ, this anthology was re-issued with an absolutely hideous, by intention, Rowena Morrill cover.)

Also, it was published 45 years ago this month…in its turn 21 years after the folding of Unknown Worlds, in it's turn founded 70 years ago, with much nostalgic and not so nostalgic reminiscence in editor D.R. Bensen’s introduction, who notes that in the US-still-neutral WW2 years, the ads in Unknown and other fiction magazines lent themselves to suggesting ways to keep that $30/week job, rather than such late 1963 concerns as nuclear war (the introduction was clearly written before the Kennedy assassination). Today, of course, we’re much further along, and often most concerned with keeping that $600-900/week job.

Unknown, of course, was the fantasy-fiction companion to the hugely influential sf magazine Astounding, as mentioned in previous posts, and during its 3.5-year run it was the other major pole in fantasy-fiction publishing in the pulps and pulp-like magazines to the similarly legendary Weird Tales (in Unknown Worlds's later years, it was published in a larger size and with better paper than the pulps, with a fairly staid cover format that looked more like The Atlantic Monthly at the time than like the pulps…all factors which might’ve led to its folding in 1943, when paper supplies were getting tight and publisher Street and Smith cut back on several fronts.) Actually, 1939, when Unknown was founded, was a good year for fantasy magazines, with Ziff-Davis first offering Fantastic Adventures (though it was originally primarily a science fiction magazine), the Thrilling Group/Standard Magazines launching the shortlived Strange Stories, and the Munsey magazine group beginnin Famous Fantastic Mysteries, primarily a reprint magazine but publishing some notable original fiction. But in the early ‘40s, the post-Lovecraft/Robert Howard/Clark Ashton Smith Weird Tales and Unknown were the most prominent titles devoted exclusively to fantasy. It’s often been thus since—when Unknown folded, both WT and eventually Fantastic Adventures gained new, good contributions and contributors…even if the latter never completely shed hack adventure fiction cheek by jowl with the better work. When WT folded for the first time in 1954, The Magazine of Fantasy and Science Fiction had arisen beginning in 1949 and continuing to the present, while FA was folded into the more ambitious new Fantastic in 1954…though, unfortunately, the tendency toward hack was simply transferred over to Fantastic for the next several years (the notable Beyond Fantasy Fiction sprung up for its run from 1953-1955 as a companion to Galaxy Science Fiction). However, F&SF and Fantastic remained the most visible and consistent markets for new fantasy till Fantastic’s first run ended in 1980 (it was merged with its sf stablemate Amazing Stories, and has been revived spottily since).

Which is a long way ‘round to get to the news that F&SF, now in its 60th year, is dropping frequency to bimonthly status for the first time since the early ‘50s, and that Realms of Fantasy, which has held that “other fantasy magazine" status for 15 years, has been rather abruptly folded by its publisher (April’s will be the last issue); the revived Weird Tales, probably the next most visible US fantasy magazine, seems to be continuing, even as Fantastic will supposedly be relaunched again.

In his headnote for one of the stories within, Bensen notes that the axolotl in the Cartier illustration included with the Sturgeon story is the adult form of the “mud puppy,” apparently the then fairly recent subject of a running joke in Mad magazine…which, coincidentally, is dropping its frequency this year from monthly to quarterly, as Time Warner cuts back at its DC/Mad comics division…

So, finally, to the book’s literary content, an attempt to, even more than with its predecessor The Unknown, concentrate on stories that had not been reprinted from the magazine…including a previously unpublished lead-off story by Isaac Asimov, “Author! Author!” This had been in inventory at Unknown Worlds when the magazine folded, and Asimov had never placed it elsewhere, and it's an amiable if slightly stiff tale of a writer literally haunted by his insufferable detective character, who attempts to steal his creator’s life.

Cleve Cartmill, busy over several decades as a ghost-writer for the likes of Leslie Charteris and possibly Henry Kuttner, as well as under his own name (and famously at the center of a WW2 investigation of his atomic bomb story for Astounding, “Deadline”), has a clever if perhaps excessively folksy deal with the devil story with “The Bargain”…Stephen Vincent Benet or Manly Wade Wellman might well’ve done a bit better with this story…perhaps this kind of thing requires a three-name byline.

Theodore Sturgeon’s “The Hag Seleen” follows (originally published, with some justice, as by Sturgeon and James Beard [not the chef]), a good example of Sturgeon’s work for the magazine, but not among the greatest (such as “It,” considered here previously as part of Knight’s The Dark Half, or “Shottle Bop”). Sturgeon’s child characters could sometimes be a bit cute, and this is an example.

Alfred Bester’s novella “Hell is Forever” might be the earliest published example of Bester’s devotion to “dazzlement” as a technique…keeping this, and such later work as The Demolished Man and “5,271,009,” moving at a breakneck pace with sudden flashes of invention and deft turns of plot. He hasn’t mastered it yet, in this tale of a Hellfire Club-like group who find themselves damned to customized private hells after they wade into deeper water than they expected…but the work is both rewarding fun and promising for what he would go on to do…including a number of other novels, the last and most purely criminous reconstructed by Charles Platt for posthumous publication, Tender Loving Rage.

And "The Crest of the Wave," Jane Rice’s tale of a murdered thug’s posthumous retribution for his murder, is a good, if unextraordinary, example of that kind of borderline crime-story horror, with fine detail.

In short, this gives a good sense of what a good issue of Unknown was like, if not (nor could it quite be) an example of the absolute best the magazine published.

It should probably be mentioned that Bensen’s one sf novel was named for the letter column in Unknown, And Having Writ…
Posted by Todd Mason at 1/30/2009 12:10:00 PM

No. My lazy, hasty search so far hasn't turned one up for the good original cover, just for the awful Morrill. (The reissue of THE UNKNOWN had a similar.)

Sorry about that. I'll drop a link in for the later cover.

Boy, do I remember this book! I bought it on the way to school and then started to read it secretly during a dull Social Studies lecture. Unfortunately, the book so captivated me, the teacher was able to walk right up to my desk without my notice and confiscate THE UNKNOWN 5. I was so frustrated I bought ANOTHER COPY on my way home that day. Thanks for the memories!

I certainly did enjoy the book, despite not finding any of the stories absolutely first rate (THE UNKNOWN had more of those). Pyramid and Bensen, their editor for a number of years, appreciated your patronage, I'm sure!

Hey, that was worth waiting for. Thanks for your persistence.

Hey, this is a lot longer than the first time I read it...

Happily, one can attempt, at least, to render one's own blog posts into something like English, even if no one is reading them any longer...seems at this hour I can find the Schoenherr cover and am having difficulty finding the Morrill again. No great loss.