...and delayed because Saturday's child works for hardly a living...)

Stories of Suspense is one of a number of fine anthologies, albeit full of chestnuts in their fields, published for younger readers by the book-publishing arm of Scholastic Magazines, in the post-TAB Books, pre-Goosebumps/Harry Potter decades, when Clifford the Big Red Dog was probably their greatest single money-maker (Scholastic has claimed serious losses of late, but I find that difficult to believe). Mary MacEwen seems only to have published this one anthology with SBS, as opposed to the busy Betty M. Owen, who published at least three horror and suspense anthologies beginning a few years later, among a number of other sorts of anthology.

Unsurprisingly for this 1963 release, there's a cover blurb: "Nine Tales of the Weird, the Incredible--including Daphne DuMaurier's THE BIRDS." (Emphasis sic.) This instead of actually crediting the editor anywhere on the outside of the package (perhaps that's why she didn't do any more for Scholastic). (You might recall that 1963 was the release year for the Hitchcock-directed, Evan Hunter and Hitchcock-adapted film from "The Birds.")

I thought I might have one that had missed the eye of Contento, but no: 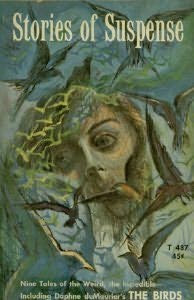 (I can add that the cover illustration is by SBS veteran Irv Doktor.)

Since I'm pressed for time at the moment, I will simply note that this an excellent collection that includes some horror (such as "Of Missing Persons," and arguably the Du Maurier) and some near-future/present day sf ("Flowers for Algernon," the novel version not yet published and some years away from being a classroom staple), but mostly stays in the proper wheelhouse, much like the much more sustainedly supported Robert Arthur YA anthologies, including the juvie "Hitchcock" assemblies from several publishers, and the ubiquitous Great Tales of Action and Adventure, edited by George Bennett (Dell Laurel Leaf). Or, for that matter, Hal Cantor's once ineluctable Berkley compilation Ghosts and Things. Seems to me it was an easy time to get hooked on short fiction in the '60s and '70s, wonder why so relatively few did. 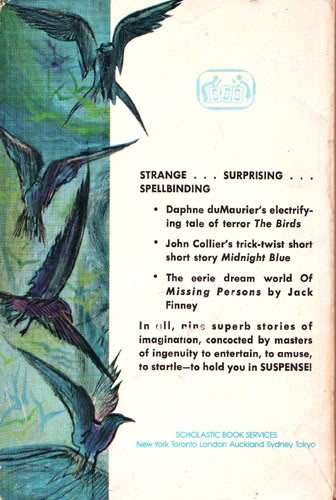 Great stories all. "Charles", in particular was important to me. I first read it one of her humorous books (Raising Demons, perhaps) and thought it was the funniest part of the book. I later read it in her collection The Lottery and was totally creeped out. It was only then that I REALIZED how magical writing could be; that Shirley Jackson could elicit two opposing reactions from me with the same story simply staggered me. She was one of the best and taught me to look for the magic behind the words.

And also a head's up for the others anthos you mentioned. I read the Bennett antho in the seventh grade and was wowed by the story of the giant spiders. Later, my swiss-cheese mind went into overdrive and I forgot Bennett, his book, and the title and author of the spider story -- remembering only, of course, that it was a cool, balls-up giant spider story. I got a copy of the Bennett last year and - Frabjous Day! Caloo! Calay! -the giant spiders finally came home to Daddy and happiness reigned and little sweet melodious bluebirds sang (until the spiders ate them, that is).

I have read most of these and they are a sterling group. Nice collection.

Nice that it included some Dunsany, too -- I kind of had the impression that he had already been booted somewhat from popular consciousness by then and in need of advocacy.

Glad you were reunited with the giant spiders of childhood, Jerry. Somehow, I've managed to forget that story in the Bennett (while such chestnuts as "Leiningen versus the Ants" and Arthur Clarke's "Rescue Party" stuck with me...I know I read "The Most Dangerous Game" beforehand.

But it is remarkable what went and I hope still goes into younger readers' anthologies, in terms of quality (which could range widely even in good anthologies, where nostalgia and other factors might be overindulged).

Yes, Patti, I was more than willing to blow a buck on this volume for the stories I hadn't read.

Kate, that might be the least forgotten Dunsany, and oddly so, perhaps, given that it's at best a borderline fantasy...and was definitely widely reprinted in the 1950s, at least, and was then a chestnut. Perhaps less so now (when ALIVE, CSI and THE SILENCE OF THE LAMBS might or might not dissuade the reader of the probability of the central situation...as might such stories as John Collier's "A Touch of Nutmeg Makes It." A meal at the Alfred Packer Grill, anyone?