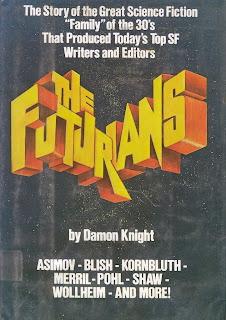 There was a freshet of memoirs of science fiction writers in the latter 1970s…the key volume in sparking this, I believe, was Hell’s Cartographers (1975), edited by Brian Aldiss and Harry Harrison, which featured autobiographical essays by the editors, Damon Knight, Alfred Bester, Robert Silverberg and Frederik Pohl. (The title refers to Kingsley Amis’s 1960 collection of essays about sf, particularly satirical dystopias, New Maps of Hell.) While Bester wasn’t moved to do too much more with his essay (slightly different versions appeared earlier in Harrison’s otherwise all-original-fiction anthology Nova 4 and in Bester’s collections The Light Fantastic and Starlight), Silverberg went on to write a fair amount of autobiographical commentary in some of his collections (sometimes rivaling the quantity of that in Harlan Ellison and Isaac Asimov’s books), and Knight and Pohl went on, shortly afterward, to publish book-length memoirs. Pohl’s was instructive but cautious, one wouldn’t quite say cagey, and Pohl has recently started a blog while considering whether to seek to publish an updated version of 1978’s The Way the Future Was (The Way the Future Blogs is in the list of links in the right margin here). Knight, apparently a less politic person by nature, published The Futurians in 1977. (Before these, there had been some prominently-published examples of biography, such as Sam Moskowitz’s error-prone collections of essays, and the biographical essays published in the special author issues of The Magazine of Fantasy and Science Fiction, including Asimov’s autobiographical essay as collected in Science, Numbers and I, along with any number of fanzine articles and the interstitial material mentioned in Ellison and Asimov’s books, including such anthologies as Dangerous Visions and Before the Golden Age…and some incidental autobiography in the likes of Donald Wollheim’s informal history, The Universe Makers.)

The Futurians, as the title suggests, deals with a sf fan club that managed to gather, during its existence in the 1930s into the 1940s, a remarkable number of the (eventually) more important people involved with sf in New York City at that time. Some, like Walter Kubilius and John Michel, are largely forgotten by today’s readers, and weren’t extrordinarily prolific at that time among the other budding professional writers, editors and/or illustrators in the group, albeit Michel was very influential on the thinking and aspirations of his more litearily-productive colleagues, notably Pohl, Knight, Cyril Kornbluth and Judith Merril; Kubilius was active in the Lithuanian-American community. Others, like Asimov, were relatively peripherally involved with the group (in his case in part because of the demands of helping his family with their candy store). But core and fringe membership included Wollheim, a major force in editing with Avon, Ace and his own DAW Books over the decades. as well as a fine writer; James Blish; Richard Wilson, journalist and underappreciated fiction-writer, who married Doris Baumgardt (who wrote as Leslie Perri) after her divorce from Pohl (the Futurians and the membership in later years engaged in a lot of [more or less] serially monogamous spouse trading); artist and writer Hannes Bok; writer, historian and reporter David Kyle; editor Larry Shaw; the eventual Elsie Wollheim, who would take over DAW Books during her husband's final decline, and more.

A number were eventually killed by damage sustainted during WW2, including Kornbluth, due to a heart ailment he picked up, or Harry Dockweiler, who died horribly some years after a minor-seeming injury spiraled out of control (but his invalid status led Rosalind Wylie and Pohl to start a literary agency for him, which led to Pohl’s controversial and influential agency)…others were eaten up by less avoidable dangers, ranging from cancer to paranoia-driven alcoholism. Knight doesn't shrink from portraying the ugliness as well as good fortune and grace within the group, and in the decades afterward…the fact that half the sf magazines being published at the turn of the 1940s were being edited by members of the club (Pohl, Wollheim and Robert Lowndes), albeit the lower-budgeted half, and all those editors were starving, or close to.

As usual of late, I’ve not enough time to explicate further, but I have to wonder what, beyond the lust inspired by photos (and casual writing fragments) of Doris Baumgardt, made this often mutually backbiting group so attractive as potential life-models for the literarily ambitious young man (old boy) that I was in 1978?
Posted by Todd Mason at 1/23/2009 12:06:00 PM

Wow, what an interesting premise.

I have to wonder what, beyond the lust inspired by photos of Doris Baumgardt, made this often mutually backbiting group so attractive as potential life-models for the literarily ambitious young man (old boy) that I was in 1978?

Any further thoughts on this? I think troubled but productive groups are always fascinating (she thinks on Virginia Woolf's birthday), because they lend rather romantic notions of the process -- a process that has a lot more to do with tedious things like lots and lots of typing, but one we like to imagine much more dramatically.

At least I always did. Sigh. Of course now I know just how dull the writer's life really is.

Well, Barrie, you might be even peripherally professionally interested in the preponderance of Futurians who were writers and editors in their teens.

I suspect that despite the hostile politics and cutting wit on display among the various Futurians, Kate, would've been an improvement over the hostility and witless hassle I faced at the same time...and as a 13yo, the option of scraping by on one's own literary work, even if in large part that these kids in the Depression had few other options, seemed pretty damned attractive, indeed. It seemed like a low-rent Algonquin or Bloomsbury, and how was a 13yo or even 20yo non-heir going to afford to keep up the dues with Those folks?

Writing is lonely work, and writers (and aspiring and failed writers) when they meet often prove to be examples of what happens to the social skills development of lonely people. But they are, if not our tribe, still carrying similar spots.

Meanwhile, as dull as writing to deadline can be, the joy of writing something just so still has its sexiness for me, its pleasurable effect. I can see, at those times, why mystical folks might suspect that it isn't really them who are putting this all together...I'm quite willing to believe I'm intermittently that good, given how lazy I've been, while still having been published on dead tree slices a modest amount of work over the decades.