Another in the series of books that sustained my love of horror, even though this, like most Owen and other Scholastic anthologies, was about as eclectic as an ALFRED HITCHCOCK PRESENTS anthology. A timely citation, since unfortunately Calisher, whose "Heartburn" is included, just died (somewhat less timely, but stil synchronicitous, is the citation by Andy Duncan on the IAFA-L list of an insane blurb on a 1963 book by the late St. Clair, not killed by apoplexy upon reading the blurb, but she might well've been:

From the back cover of Sign of the Labrys by Margaret St. Clair, a 1963 original paperback novel from Bantam:

"Women are writing science-fiction! ... Women are closer to the primitive than men. They are conscious of the moon-pulls, the earth-tides. They possess a buried memory of humankind's obscure and ancient past which can emerge to uniquely color and flavor a novel. Such a woman is Margaret St. Clair, author of this novel. Such a novel is this, Sign of the Labrys, the story of a doomed world of the future, saved by recourse to ageless, immemorial rites ..."

Duncan's scan of that cover:
http://beluthahatchie.blogspot.com/2009/01/women-are-writing-science-fiction.html

Meanwhile, I think you can see why these books might appeal to any literate youth; this was, I'm pretty sure, my introduction to Borges (I wouldn't catch up to his new work till The Book of Sand a few years later; also to Lawrence and probably to Aldiss, Highsmith, and "Seabright" (slightly ironic that what is almost certainly St. Clair's best know story was published by her under her Magazine of Fantasy and Science Fiction pseudonym).

The Aldiss is a slightly silly but ingenious account of a prison made up cells on a sort of wheel within a mountain, told in the great gray tones appropriate to such a narrative. The Highsmith is "The Snail Watcher," and I hope you've come across it somewhere in your reading life by now...easily the most famous short story published by the shortlived US fantasy and sf magazine Gamma, despite not being sf nor fantasy, but a potentially realistic animal suspense story involving the kind of obsessive Highsmith loved to describe (and one wonders why it ended up in Gamma rather than a higher-paying market...was it widely rejected? A favor to editor Charles Fritch, who later would edit the last years of Mike Shayne Mystery Magazine? The others are nearly as common chestnuts of such anthologies, and other sorts, except perhaps for the Calisher, which might well've been first anthologized, and spotted by Owen, in Ray Bradbury's Timeless Tales for Today and Tomorrow. 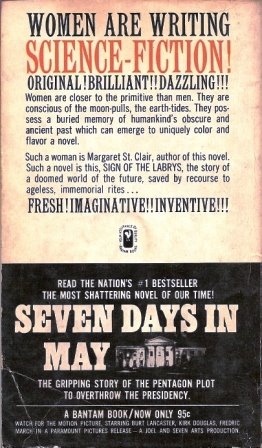 Three of my favorite stories in here.

A lot of great history here. Thanks. "The leopard man's story" and "The snail-watcher" are two stories I've always enjoyed.

You're quite welcome, David, and thanks for checking in...when one considers that Highsmith's second and lesser snail story everyone dimly remembers appeared a few years later in the fading but still remunerative SATURDAY EVENING POST...

What a great array of stories: you don't get that kind of selection in genre collections now. The barriers between "high" and "low" (or perceptions thereof) are too imposing.

I need to hunt up more St. Clair to read, if only for the historical reasons.

Well, Kate, she averaged pretty good. And one must keep in mind that these were anthos aimed at kids, so that there were at least two encouragements toward eclecticism--kids weren't expected to have read anything yet, and the notion that anyone objecting to the kids reading something macabre might be overruled by the notion of the kids reading such widely-appreciated writers.

Some of the instant remainders these days, such as the current editions of the books spun out from HPL's "Supernatural Horror in Literature," remain eclectic in this way, but the snobbery and catering to perceived audience snobbery is pretty fierce...unless the anthology is a Joyce Carol Oates or a Peter Straub...even the Ellen Datlows and Bradford Morrows might be overruled, I suspect, or find their publishers trying to overrule them.

Patti tells me that her trio of favorites are the Lawrence, the Jackson and the Highsmith.