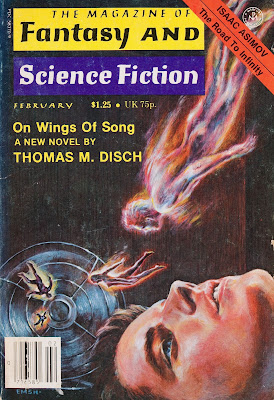 So, taking all things together, on July 4th, Thomas Disch decided he might as well shoot himself, and did so successfully. Things had not been going well for him...he was 68 and diabetic and having some motility troubles, his life partner Charles Naylor had died a couple years back, he was worried about being evicted from his rent-controlled apartment, his summer home had been flooded and damaged beyond habitability, his fiction was largely out of print despite being usually good to brilliant and occasionally, however briefly, on bestseller lists. He wrote a novelet that spun out a Disney franchise, "The Brave Little Toaster," but apparently his agent was eaten by Hollywood sharks, got him a bad deal. He was at least a semi-major poet, widely published, as Tom Disch, in the likes of Poetry and The Hudson Review; his criticism appeared in Harper's and The Nation and Chronicles and Entertainment Weekly as well as F&SF, and that's a range. He was one of Cele Goldsmith/Lalli's "discoveries" at Fantastic and Amazing, along with Kate Wilhelm and Ursula K. Le Guin and Roger Zelazny and Keith Laumer and Ben Bova and fellow poet Sonya Dorman as a writer of prose. His friend John Clute, in a much-quoted phrase, called him the Least Read of major sf writers; Teresa Nielsen Hayden in her blog Making Light repeated the rumor that the Bantam paperback edition of his novel On Wings of Song had a 90% stripped cover return rate...perhaps not too surprising, although the cover isn't nearly as ugly as the one Bantam slapped on Samuel Delany's selection of Disch's shorter works, Fundamental Disch. Even given that Wings was nominated in 1980 for the American Book Award, in that brief period when the National Book Award didn't exist, which I think was the first and maybe only time so far a book serialized in The Magazine of Fantasy and Science Ficiton was nominated for a major eclectic award. When I asked the manager of Philadelphia's lesbian and gay, bi and cetera, bookstore Giovanni's Room why they didn't stock more, say, Disch and Joanna Russ, he noted that they had had a copy or two of Wings on their shelves for years, without a purchase.

I don't believe it was Disch's first fiction with a gay theme nor surely his first about repression and cruelty and how the arts could help set you free, to some small extent...one could hardly even call it particularly Coded, since at the center of the story is a means to achieve a sort of astral projection, or "flying," that is achieved most easily through song and which results in one's out of body self being referred to as a fairy. Such flying is particularly frowned upon in the repressive, Moral Majority-administered Midwest, which region Disch fled as a young man, but is at least tolerated in the "decadent" or at times simply decadent coastal cities, which have an uneasy relation with the almost seceded "heartland." One of the young protagonist's closest acquaintances, for example, is an aging member of a new class of castrati, as this practice has apparently come back into vogue in the opera world of the near future. 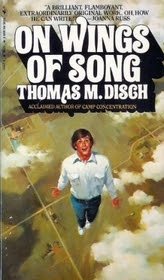 Clearly, a more personal novel, even or particularly with the baroque touches, than what Disch had been writing previously, including such notable work as Black Alice, a crime novel in collaboration with John Sladek, and his masterpiece 334.

He also wrote a Miami Vice episode. And did some minor acting, in opera and in a no-budget indy film.

And more people really should read his work.

For more "forgotten" books which shouldn't be, see Patti Abbott's sample citations and list of links at her blog PattiNase
Posted by Todd Mason at 7/11/2008 01:12:00 AM

Wow -- now I feel bad about not having read much Disch. Clearly he's someone I would enjoy reading more. There's an eerie overlap with what I'm writing right now, though that would make me reluctant to read OWOS right now. Probably I'll read it after and kick myself.

I wonder how he ever got hooked up with Miami Vice? Interesting (but sad) post!

Forget Disch! I like your wry dry writing. Aloha from Waikiki-

The Brave Little Toaster in literary form is not to be missed, unlike the movie.

Indeed. In its first appearance in F&SF, the first story also inspired a charming cover by Gahan Wilson, as well.