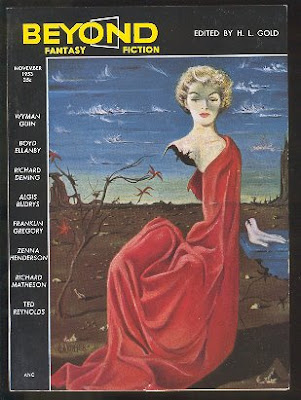 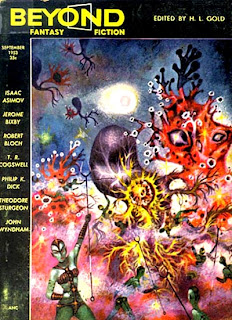 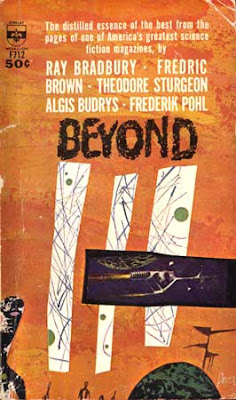 The Contento Index: Beyond ed. Anon.[by Thomas A. Dardis] (Berkley Medallion F712, Jan ’63, 50¢, 160pp, pb)
7 · The Watchful Poker Chip of H. Matisse · Ray Bradbury · ss Beyond Fantasy Fiction Mar ’54
15 · The Ghost Maker · Frederik Pohl · ss Beyond Fantasy Fiction Jan ’54
27 · Can Such Beauty Be? · Jerome Bixby · ss Beyond Fantasy Fiction Sep ’53
40 · The Real People · Algis Budrys · na Beyond Fantasy Fiction Nov ’53
94 · The Beautiful Brew · James E. Gunn · nv Beyond Fantasy Fiction Sep ’54
117 · I’d Give a Dollar · Winston K. Marks · ss Beyond Fantasy Fiction May ’54
130 · The Root and the Ring · Wyman Guin · nv  Beyond Fantasy Fiction Sep ’54 150 · Double Whammy · Fredric Brown · gp Beyond Fantasy Fiction Sep ’54;
Naturally, vi;
Voodoo, vi
153 · Talent · Theodore Sturgeon · ss Beyond Fantasy Fiction Sep ’53
So, this is about as forgotten a book in fantasy-fiction publishing as has ever been released by a major publisher in the field, featuring good (but largely unreprinted) stories by major writers (and a few solid minor writers) in the field, from a magazine that suffered several strikes against it (but largely not artistically, it having published much rather more popular work). Edited by Thomas Dardis, who is credited nowhere on the package (and might well never have edited another book--he was the editor in chief at Berkley Books at the time), the book is misattributed in some places to the magazine Beyond's editor H. L. Gold, a brilliant fantasist in his own right and the clangorous editor of Galaxy, the most influential sf magazine of the 1950s, the stablemate of Beyond. The fantasy magazine, which was issued beginning in 1953, and was retitled from Beyond Fantasy Fiction to Beyond Fiction in 1955 without notable change in content, was hobbled by the financial reverses the Galaxy Publishing Company had suffered--in its very creation, GP Co. had less resources than the international combine, World Editions/Edizioni Mundiale, that had launched Galaxy among several less successful US ventures, and sold the sf magazine to its printer and shut down their US operations. Also, the success of Galaxy had inspired a number of other magazine publishers to try their luck with sf magazines, and sf and fantasy saw more titles flooding the newsstands, at a time when magazine distribution was already becoming a chancier proposition, than ever before or since. Most of these new fiction titles were decentish, but leaning toward the indifferent; some were terrible...which meant any new one, even the sibling of Galaxy, had little chance to distinguish itself, and by the end of the decade most of the magazines had folded. Despite an average quality as good as any of the best fiction magazines in the decade, Beyond folded in 1955, leaving a legacy of largely brilliant longer fiction, often rather notional shorter fiction, and an unusually large percentage of stories with a sort of simmering sexuality that dared not express itself directly, particularly in the early issues. So, eight years later, this anthology, plastered with the claim that Beyond was a great sf magazine, which it was not (like its great model, Unknown Fantasy Fiction, it publshed a fair amount of borderly science fantasy, but not as a majority of its content), and with a decent but unspectacular Richard Powers cover and a clumsy grouping of contributors' names. And its a good, reasoably reprsentative slice of the magazine, leading off with a rather precious Bradbury and wrapping up with a good if unspectacular Sturgeon (not only Bradbury's first great model but also probably the most important contributor to the magazine, much as he was probably the greatest setter of the tone and feel for Unknown in the previous decade, and featuring some of the relatively rare fantasies of Frederik Pohl and Algis Budrys, both much better knwon for their sf, and both vitally important to Galaxy in various ways (even if Budrys was publishing more in nearly every other major sf magazine of the 1950s); the other Gold-magazine stalwarts James Gunn and Wyman Guin (Guin would publish little with any other editor), and such old fantasy hands as Jerome Bixby and Fredric Brown (with two fun if slight vignettes, one of his several specialties). A good if unextraordinary book, and still, I think, the only anthology drawn exclusively from Beyond's inventory, which is criminal in and of itself. But, then, Fantastic's nearly thirty years of publishing is represented by two only slightly less obscure volumes, and they only slightly better representative of its best work.
Please see Patti Abbott's blog for more of today's and previous weeks' "forgotten" books.
Posted by Todd Mason at 6/12/2009 09:55:00 AM

Would you regard NEVER LET ME GO as sci-fi or fantasy? Did you like it if you read it?

I haven't read it yet, but the synopsis I've just read certainly is science-fictional. Kazuo Ishiguro has at least verged on sf before, as well, iirc.

What did you make of it?

(or hit my name hotlink)

I tried to buy a complete run of BEYOND but the seller kept raising the price. I've only found a few random copies.

In these eBay days, it's easier than it used to be. I have nearly a complete run w/o having worked too hard for it.

Great review. Thanks for it. As I'm now embarking on reading more SF/F including the classics, this is an anthology I'm going to need. I'm now going to be searching for this collection. And can someone remind me who the artist was who did the cover art (the orange one)? It's a style that I particularly love and would like to see more of.

As an example of what he could also do, see the larger issue-cover image. He was a major artist in sf and fantasy publishing in the 1950s and 1960s (and less often employed after) and certainly the greatest exponent of abstract illustration. Powers's work on websites:

(Careful not to confuse this Richard M. Powers with the relatively undistinguished nature artist Richard Powers or the novelist Richard Gid Powers.)

Actually, it's the smaller image (that blows up upon clicking) that is Powers's...the one with the turquoise humanoid and the other creatues, as opposed to the one with woman who has fallen into a difference-splitting situation between Magritte and Tanguy.

Have you seen the poster for the upcoming The Mercury Men? (http://www.mercuryseries.com/poster.htm) It's got the same, cool early 60s/Outer Limits/Twilight Zone vibe.

I hadn't. A bit more lean and angular and intentionally retro, vs. Powers's of the moment rather organic-seeming forms...