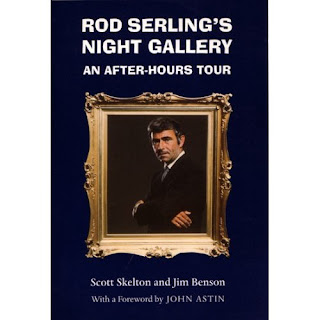 Rod Serling's Night Gallery: An After-Hours Tour is an example of why we can love university presses, even if the ridiculous list price (for this still barely in print volume) of $70 is an example of why we can be disappointed in them as well. This is a reasonably well-written and very well-researched (to the extent of my ability to nitpick) episode by episode and season by season breakdown of the production hassles and greater or lesser aspirations of a series that employed a unique range of talent, and often produced better results than memory might suggest (because so often, worse results were also produced, something the authors are not shy about noting).

Serling, famously, lost what control he had of the series as it went forward, and turned to other projects, such as his five nights a week radio anthology Zero Hour, and such notable narration duties as for the National Geographic Specials spinoff series The Undersea World of Jacques Cousteau, and Universal TV producer Jack Laird (once called a "thug" by Harlan Ellison) tightened his grip on the production. Meanwhile, the employment of such major jazz musician/composers as Gil Melle (who was moving into exploring electronic music, as with the more memorable series theme) and John Lewis (of the Modern Jazz Quartet and a number of the films from the 1960s onward) is just one slightly surprising example of the caliber of artist working in support roles for the better and worse horror and suspense drama (the most famous Serling line about the series, particularly after the first season, was that it had become "Mannix in a shroud"--like that series, which had also started well, it had become a routine sort of product, at least too often).

Aside from presenting several of the best realizations of H. P. Lovecraft's fiction in audiovisual media so far (if not quite the labors of love that some of more recent productions have been), the series was notable for having the good sense to adapt such major and notable writers as Fritz Leiber and Hal Dresner (in the first actual episode, after the pilot tv film), but odd casting in the adaptation of Leiber's "The Dead Man" weakened the impact there, and utterly inept reworking of the script on set (and a bad performance by a very young Diane Keaton) apparently were the resaons that "Room with a View" is so grindingly inept as presented. A not-bad, if watered down, adaptation of C. M. Kornbluth's "The Little Black Bag" was a part of the next episode.

A fine book about an important series, if not by any means always a good series (however many of us remember fondly "The Earwig" and "They're Tearing Down Tim Reilly's Bar").

Thanks for an excellent review.

I would enjoy this. I grew up near Ithaca, New York that Serling called home and always enjoyed the many references to the area he made on TZ. And I still like the GALLERY. Many fine episodes that still entertain.

Serling's hometown high school is sponsoring an annual Serling Memorial Video Festival, for kids ranging from just old enough to hold a camera (and use an editing suite software package, I guess) to high schoolers. It's a wild mix, NIGHT GALLERY, and reviewing some episodes on Hulu and on the "classic television" channel (Retro TV? it's slipping my mind) my parents' cable offers just brings that home even harder. Even the pilot film, with its remarkably clumsy and "arty" Spielberg-directed second playlet (of three) bookended by more effective, if less ambitious, drama. Roddy McDowell, as he also proved in LORD LOVE A DUCK, was always a good portrayer of SOBs.

Terrie--thank you, and you're quite welcome. As usual, I did try to slip in some chewy bits that the authors couldn't or didn't think wtihin their purview in this volume.

Will never forget THE EARWIG-I have the companion to THE TWILIGHT ZONE, but not this.

Yes, the Zicree volume, which is comparable (as is David Schow's volume for the original OUTER LIMITS) was (were) published by commercial publishers.

You're right about NIGHT GALLERY doing right by H. P. Lovecraft. Some people (like me) think segments of NIGHT GALLERY matched the best of THE TWILIGHT ZONE.

Good brief and this post helped me alot in my college assignement. Thank you for your information.