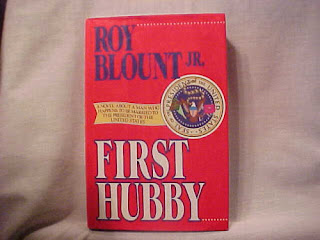 (Note on Friday morning...I know I was exhausted last night, but the edits and corrections I made to this draft, written on Wednesday night, were for some reason Gone and the uncorrected version was posted. Sorry about that.)

First novels by writers established in other forms have their own perils. Particularly if the writer in question doesn't usually write prose, per se...recall Bob Dylan's fairly unreadable Tarantula (which, to be fair, is more like a selection of rambles than a short story collection or novel) and Penn Gillette's utterly unreadable Sock (definitely an attempt at a novel which is instead a collection of punchlines, many redundant). Roy Blount, Jr., a seasoned essayist and journalist by 1990, doesn't fall into those traps, and while he creates and falls into a few others, I rather enjoyed First Hubby, and was impressed by how many not-too-far-off guesses it included (being, as it is, a near-future sf novel of a 1993 which sees the inauguration of the first woman to become the U.S. President).

Blount basically seems to be taking Vonnegut's novels as model, making a lecture, one full of asides, out of the book, even as it's folksier and at base considerably less bleak than the typical KV. The jokes tend just a bit more juvenile than his model's, when Blount is in the mood for a juvenile joke, and Blount seems more comfortable with sex, at least between the protagonist, a Guy Fox, who while he might just get his day, doesn't attempt to blow up any legislative bodies, and the current and, in flashback, eventual Madame President, Clementine Fox, nee Searcy.

Clementine's portrayal is that of a love letter, one tempered by the frustration of a multiply-divorced man...she verges on perfect in most ways, yet particularly in the present-day sequences she seems a bit distant, and to take Guy for granted, in ways that bother him even more than his status as appendage to the well-spoken, famously level-headed, comparatively youthful and attractive first-of-her-sort President. Fox is very clearly a variation on Blount, himself, and one hopes he's had some approximation of Clementine in his life...he both dedicates his book to his literary agent and makes her a minor character in the book, a member of a feminist activist group somewhere between NOW and the Yippies but less leftist than either, which is one of the elements that coalesce into a credible third-party Presidential bid...eventually with student-, civil-, and women's-rights movement veteran Clementine as the VP candidate to a maverick billionaire who finances his reformist, yet relatively centrist, campaign out of pocket...and manages to get himself elected in 1992, versus a scandal-weakened George H. W. Bush and an improbable second go-round for a newly re-energized Dukakis (an attempt at a coup led by Marilyn Quayle has led to J. Danforth being dropped by the GOP in favor of Colin Powell for VP, while Dukakis's running mate is Jesse Jackson...Blount never spells out what I suspect is his suspicion, that a white woman might well have a better shot at the #2 job in 1992 than a black man). The new President DaSilva gets as far as pushing through the appointment of Secretary of Defense Ralph Nader not long before being killed in a freak accident (a rather too freakish and convenient accident, the former to help us get past the latter I suspect)...leaving Clementine in charge. That's a lot of guesses about the shape of and players in the next decade's national politics that're both good and lucky.

Blount gets to go off on tangents about political hypocrisy among other kinds, makes a recurring theme of the remarkable ubiquity of childhood sexual abuse, and explores the various ways a writer not yet satisfied with his career can find to accommodate to a life of modest success in the shadow of his much more celebrated spouse. It's usually a funny, and at times a moving, book. Not perfect, by any means, and it can lose its thread at times, but vastly to be preferred to such other Southern Comics as, say, A Confederacy of Dunces...very little of Blount's book, unlike Toole's, seems forced, indeed a little more shaping would've helped. But Blount has a way with a telling vignette in the middle, or at the end, of a chapter.

I can feel the effort you expend in writing well. So glad you make time to do this each week.

Thanks, Patti...I think you've been feeling the strain more than I, at least in the online reading. Though I hope my prose doesn't seem too Effortful...goodness, I just pulled another few redundant vague words and typos out. Editing while asleep not recommended.