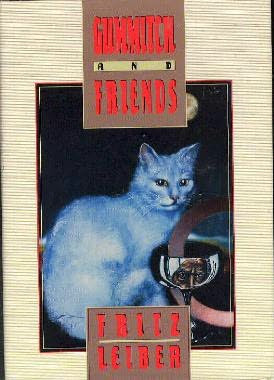 I'm breaking my perhaps cardinal rule with this one--this collection, meant originally to be a celebration of Fritz Leiber's great love of cats, and perhaps particularly of the cat character Gummitch, modeled in part on a small cat that Jonquil and Fritz Leiber kept in the '50s and '60s, and then suddenly expanded to become a memorial volume for Leiber, is still in print.

And it's a handsome thing, with a slipcase and charming illustration (including an illo for the humanoid/felinoid Tigerishka, from the novel The Wanderer...my least favored of the Leiber novels I've read, but one which has its following. The two probably indespensible stories in the book are two of Leiber's most famous, "Space-Time for Springers" (which introduced Gummith and his people, including the analogs for Jonquil and Fritz Leiber, and with their son Justin transmogrified into a troubled daugher), and "Ship of Shadows" (published after Jonquil's death, a story of a man desperatedly trying to swim out of chemical dependency, even as Leiber himself was at that time, with the not so gentle prodding of a sentient and voluble cat).

The rest of the Gummitch stories are not up to "Space-Time," but it was a good idea to bring them all together. As noted, Leiber's death, not quite sudden, turned this into a memorial volume, and the econmia from Leiber's friends (including Margo Skinner, his companion in thier last years...she died with a year or so of his passing). The short essays vary in quality, some more impeded by grief than others (and some by folks closer to Leiber than some of the others).

This is not the Leiber volume for the beginning reader of this genius, though it's good thing to have, for the simple elegance of the book-making and the better contributions, from Leiber and others (I wish I could find some good in Skinner's poetry, but I don't). Cleveland Amory (or Dewey) -fan cat lovers are not, on the whole, the natural audience for this book, etiher...but if you already know Leiber's Conjure Wife and You're All Alone, Our Lady of Darkness and The Big Time, the Fafhrd and Gray Mouser saga, and so many brilliant shorter fictions...this is a book you will eventually need to read.

I always know I am going to find something different on your blog.

I just ordered this book from Amazon and look forward to reading it, I liked Liebers "Our Lady of Darkness" and his depecition of coming out of dependence, so I look forward to "Ship of fools"... also the new charechter of Gummitch, I love authors that build memorable charechters. Thanks for the review on your blog.

You're quite welcome. Hope you like it...Leiber was in many ways the best in much of what he did. "Ship of Shadows" probably won't disappoint you.