FFB: ARGYLL: A MEMOIR by Theodore Sturgeon (The Sturgeon Project 1993) 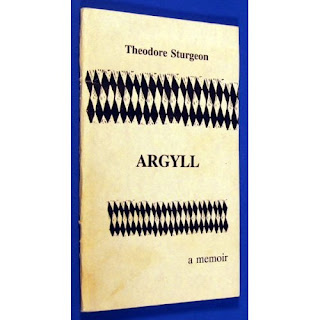 Argyll: A Memoir (The Sturgeon Project 0-934558-16-7, July 1993, $10.00, 79pp, ph) Collection of Sturgeon material, including an autobiographical essay about his relationship with his stepfather, a letter to his mother and stepfather, an introduction by Paul Williams, and an afterword by Samuel R. Delany. All proceeds after cost go toward the projected publication costs for Sturgeon’s collected stories.
5 • Introduction• Paul Williams • fw *
7 • Argyll: A Memoir • • bi *
60 • A Letter to his Mother and Stepfather • • lt *
77 • Afterward • Samuel R. Delany • aw *

This was the kickoff (and a sort of fundraiser) for the Sturgeon Project, an attempt by Paul Williams, the founder of Crawdaddy magazine and the person most responsible, after Dick himself, for Philip Dick's current literary reputation...Blade Runner might've gotten made without Williams's earlier advocacy for Dick, most visibly in the pages of Rolling Stone (I believe after Williams sold Crawdaddy to another publisher), but I doubt nearly as much would've been made of it being loosely based on a Dick novel...nor would Dick have published one of his last stories in a 1979 Rolling Stone special issue, bringing his work directly to a much larger audience than it usually saw. Having put together a complete collection of Dick's short fiction (and having helped see most of Dick's unpublished novels finally into print), Williams took on, with North Atlantic Press, a new project...to get all the short fiction of Theodore Sturgeon into a uniform multivolume set. This chapbook was also an announcement of that project, a previously unpublished novella-length memoir by Sturgeon of his early life, and the stepfather who was instrumental in his transformation from E. Hamilton Waldo to Theodore Sturgeon...and not by any means all benevolently instrumental.

The most recent and apparently penultimate volume in the Sturgeon Project, Slow Sculpture, has just been published, and this the first with most of the nonfictional content (story notes, etc.) not the work of Paul Williams, who has been suffering with rather early Alzheimer's brought on in the wake of a horrible accident...he fell and struck his head severely while bicycling. His wife, musician Cindy Lee Berryhill, has been blogging about their experiences in these declining days for Williams, and Noel Sturgeon has stepped in to provide the supplementary material for this volume and the next. While anyone with a copy of the 1971 volume Sturgeon Is Alive and Well... has most of the fiction content of Slow Sculpture, that book has been out of print for a lot of years and this one included a previously-unpublished story, and the novella "The [Widget], the [Wadget], and Boff" (which was half of a Tor Double volume some years back, in that shortlived series), and also a story from the National Lampoon, also reprinted previously on its own.

The story around the publication of this chapbook and the collections it heralded is thus almost as compelling as much of the fiction in those collections, much of it among the best work published in the field of fantastic fiction, and at least good work in several other fields, as Sturgeon was a fine western writer, and wrote some decent crime fiction (including ghosting for "Ellery Queen"). Several contemporary mimetic stories, sometimes with some fantastic dressing to get them into a fantasy magazine "legitimately," are collected in the series as well...including such famous items as "A Saucer of Loneliness" and the mid-'50s Best American Short Stories inclusion "The Man Who Lost the Sea."

Sturgeon, as Kurt Vonnegut would agree (his "Kilgore Trout" is at least as much a satirical portrait of Sturgeon as of himself), even as Samuel Delany does in the afterword here, is precisely the kind of writer whom I was thinking of in my recent explication, on Patti Abbott's blog, of why the blithe construction "literary and genre fiction" (meaning two very different, even oppositional, things) is not only ignorant but pernicious, helping keep some of the best art we have from its natural audience.

I took a look at Cindy Lee Berryhill's blog. A very sad story.

I got the new Sturgeon book earlier this week and I wondered why the notes weren't by Paul Williams. I was not aware of what had happened to Williams.

I am a major admirer of Sturgeon's writing. Slow Sculpture was the first book in the Sturgeon Project series that I had seriously considered not buying, since I knew that the only story I hadn't read was "The Beholders" which, as you mentioned, had not been published before this. I decided that having gone this far with buying the series, I might as well keep going, especially with the opportunity to read the story notes and other material not written by Sturgeon. I had not realized that "The Man Who Lost the Sea" was not only my favorite Sturgeon story but the favorite of many other people, including Connie Willis. (It is also a fine story to read aloud, partly because of the absence of dialogue.)

And speaking of reading aloud, when "Pruzy's Pot", the story that you mentioned had originally appeared in the Lampoon, was published as a book by itself, some of the copies also had a cassette tape of Sturgeon reading the story. I don't think he reads it particularly well (and it sells for ridiculous prices), but because of my great respect and affection for Sturgeon's work, I'm glad I have a copy.

...of why the blithe construction "literary and genre fiction" (meaning two very different, even oppositional, things) is not only ignorant but pernicious, helping keep some of the best art we have from its natural audience.

No shit, eh? It bugs the hell out of me -- on both sides. I'm fed up with colleagues who snicker at genre writing (except mysteries: for some reason mysteries are given a pass and they all devour them) and spec fic fans who sneer at lit fiction or anything too "pretentious" (oh my GOD! a literary allusion! Get your pitchforks and string the bastard up! [yeah, I know -- mixing metaphors: sue me. I write genre and lit fiction]).

Like Pete Townshend, I don't see anything wrong with being pretentious -- it means you have some ambitions.

I was an avid reader of Crawdaddy. I kept their special issue on suicide close to hand long enough to raise suspicions. I haven't read nearly enough Sturgeon. Vonnegut got me started -- I loved Kilgore Trout. I will forever fear being pursued by my characters shouting, "Make me young again!"

As horrifying as it is to read such sad accounts of dissolution, it is also a monument to the great power of writing to open up such devastating experiences so vividly, to share that pain and, if not actually lessen it, plainly show what it is like. Sometimes all we can be is a witness.

Indeed, Steve, I mentioned, in my usual rushed and tortured prose, that "Pruzy's" had been issued as a chapbook, as well. But I've never had it in either form before. In the unlikely event you don't have it, seek out the Caedmon recording of Sturgeon reading the first third of MORE THAN HUMAN...that's very well done, indeed. (You'll probably have to pay through the nose...why the hell HarperAudio isn't doing more with the Caedmon catalog, dunno.) One of my lifetime regrets was in not scraping together the wherewithal to go to Sturgeon's 1984 Maui writer's workshop, which gave Elizabeth Engstrom her first leg up as a pro writer. when I was looking for work and shelter simultaneously on Oahu. It was his last, I believe.

Indeed. "You can't save everyone." --Camilla Mason nee Rocchi. Some days, though, the worlds of pain you can find without looking too hard are very enthusiastically tapping you on the shoulder. "Come join!"

Concretizing the abstract, sistah. The pomo mind at woik.

Yes, the snobbery in all directions is excruciatingly tiresome. And the joyous squawks of those Who Have Invented Sliptstream--the literature with that misbegotten label that suggests that 1) there's a meaningful Mainstream of literature that 2) fantastic fiction is meaningfully divorced from so 3) they are there to "bridge" the "gap"--I usually try to burst those bubbles too viciously, but some days, you can't save Anyone.

Try not to. But in a good grump, mistakes will be made.

Here is a list of stories not yet published in the series that I suspect will appear in Volume 13:

There is also an LP AWR 3340 (Alternative World Records Inc.) with Ted reading Bianca's Hands, The Hurkle is a Happy Beast, and the Britt Svenglund section from Godbody.

Thanks, William (if that's the handle). Those Alternate Worlds Recording definitely need reissue, too.