There are so many magazines that have done interesting things in being devoted to reprints from other sources...these three are among those most important to my reading experience, and at least two of them are among those magazines which help blur the lines, for some at least, between books and magazines. 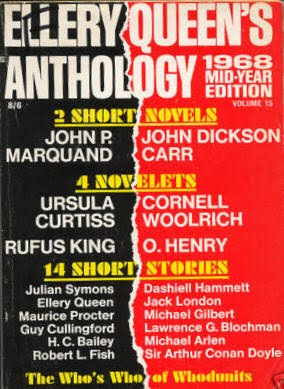 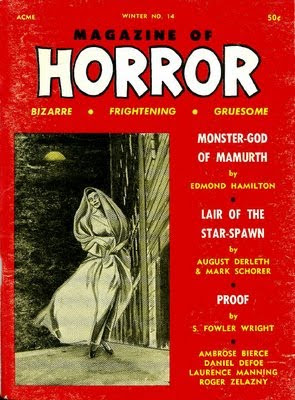 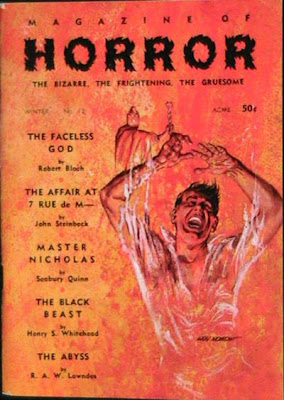 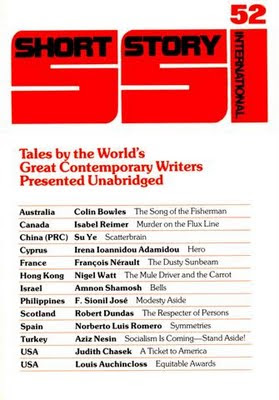 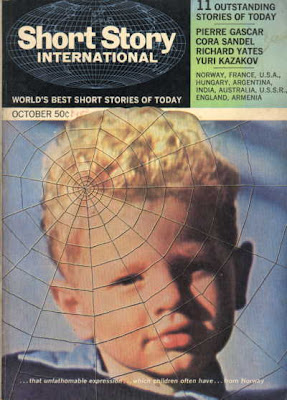 Short Story International had a brief run in the mid-'60s (1963-66), then came back in the latter '70s with rather more expensive production values (and briefly a companion magazine aimed at kids), a run which managed to continue through the next two decades (though it dropped off newsstands after the early '80s). The concept was the same in both iterations; to reprint stories, and occasionally to commission new translations though usually to reprint its translated stories as well as the ones published originally in English, in the interests of both presenting an interesting array of reading and encouraging international understanding. Sometimes this could make the magazine feel a bit Improving, but generally editors Francesca Van der Ling (first version) and Sylvia Tankel (second) managed to select a good range of work, much of which would be otherwise almost certainly overlooked in the US (and some of the US selections were rather amusing choices, as well, including a reprint of a [Ms.] Sam Nicholson story from fellow US digest-sized magazine Analog; another of similar vintage was Woody Allen's "The Kugelmass Episode," which had already been reprinted from The New Yorker by that ofther fellow US digest The Magazine of Fantasy and Science Fiction.) After John Groth's death, they never replaced him as their sole illustrator, and so the covers went over to typeface only. Gibraltar's own E. G. Chipulina was a particular favorite of the magazine, and I certainly enjoyed his stories. 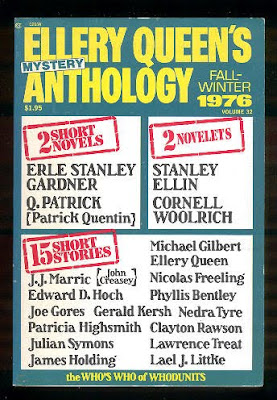 Ellery Queen's Anthology was the big, sloppy reprint cousin of the rather sloppily-produced Ellery Queen's Mystery Magazine of the first decade and change of Davis Publications' ownership of the latter magazine (the earlier issues, from Mercury Press, were rather more elegantly produced, and when Joel Davis took over Davis from his father, founder and Ziff-Davis refugee B.G. Davis, EQMM and EQA started to look rather less slapdash again). These productions, which were also published in hardcover by Dial Press and others, were both great ways for Frederic Dannay and company to reprint novellas and short novels that had fallen into obscurity, but also to reprint shorter stories from EQMM, which itself continued to offer classics and obscurities as it pleased Dannay (but far less frequently than in the early years at Mercury). When Davis Pubs. acquired Alfred Hitchcock's Mystery Magazine and Analog, and founded Isaac Asimov's Science Fiction Magazine, they too soon had fat "Anthology" reprint companions on the newsstands in the EQA model (though as time went on, the magazine versions started to take on rather more indivuated titles for each issue, and some were mixes of reprints from the two CF and two SF magazines, rather like the books they were producing simultaneously). 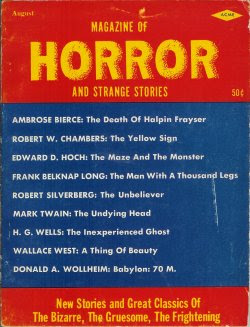 The Magazine of Horror was a small-circulation but doughty magazine that ran for most of the '60s and into the earliest '70s, as the primary market to carry the "horror" banner, even while F&SF and Fantastic for most of those years were also fine sources for the fiction, but didn't advertise as obviously (Joseph Payne Brennan's little magazine Macabre also made its way through the decade, but not on newsstands). Put together on almost no budget by editor Robert Lowndes, who had taken on a job at the small publisher Health Knowledge after the collapse of the Columbia magazine line in 1960 (where Lowndes had been editing some of the last pulp magazines, on a slightly larger microbudget, and introducing such writers as Edward Hoch and Carol Emshwiller to the reading public), MOH was the first and ultimately the last of the fiction magazines published by them at his suggestion (among the other titles he also edited for HK included Famous Science Fiction and Worldwide Adventure; MOH's very similar stablemate Startling Mystery Stories was the first to publish F. Paul Wilson and Stephen King, in its tendency to offer new fiction by young writers along with the reprints from famous and obscure older contributors). Hoch published some of his Simon Ark stories with MOH, Ramsey Campbell offered some of his first non-Lovecraftian work there, Joanna Russ and Roger Zelazny placed such notable stories as "Come Closer" and "Divine Madness" (respectively) with the magazine, and I'm sure not too many periodicals have offered the reading public stories by Robert Bloch, John Steinbeck, and Seabury Quinn simultaneously.

I don't remember Short Story International but I certainly do remember The Magazine of Horror and the Ellery Queen anthologies. I don't know if you picked out the best of the Queen's, but look at the authors in the 1976 volume - Ellin, Woolrich, Gilbert, Treat, Symons, Gores, Highsmith, Kersh! Nineteen stories for $1.95 - even in 1976 that would have been a good deal.

There was a considerably less classy precursor to The Magazine of Horror, Shock Magazine back in 1960. On looking it up now, I see it only got through 3 issues, but I remember each issue scaring the sh...daylights out of me. This would have almost certainly been the first place I read "Bianca's Hands", "Graveyard Rats", "The Monkey's Paw", "Sredni Vashtar", "Yours Truly, Jack the Ripper", Stanley Ellin's "Specialty of the House", Avram Davidson's "The Tenant", Bradbury's "The Crowd", and a bunch of others. I don't recall who the editor was, but it was definitely someone who knew how to scare a kid. (I suspect “Graveyard Rats” would still get me.)

Well, as I recall, "The Graveyard Rats" was Henry Kuttner's first sale, and it does tend to hold up. And one of the two SHOCK magazines of 1960 or thereabouts, probably the one you read, also ran at least one notable new story, Robert Bloch's best suspense short as far as I'm concerned (and the IDW comics folks apparently agree, inasmuch as they chose it to adapt in their series DOOMED), "Final Performance." I've mentioned that SHOCK in an older entry in this blog (though I've never seen an issue and didn't realize it was mostly reprints). And, yes, indeed, the various ANTHOOLOGY issues from Davis were good deals, particularly the EQAs, which were the only ones not to be solely collections from its parent magazine (if you had all the IASFM issues, you had all the stories in the ISAAC ASIMOV'S ANTHOLOGY issues).

And these images are basically the best examples of cover imagery a quick search could turn up...I should've dug around for some earlier EQAs...

Well, at least the Bloch, Colier, Saki, Sturgeon, Ellin, and Bradbury stories are reprints. I should seek out the Davidson.

Apparently the second and last issue of the good SHOCK, September 1960, had "Final Performance" as a cover story, Donald Westlake's "Cat Killers" as another original, and probable reprints by Bradbury, Roald Dahl, Murray Leinster, and Charles Beaumont. Really a pity it didn't make a longer run of it. I think I might prefer their reprints to many of the pulp, public domain items Robert Lowndes dug out...

The good SHOCK actually had three issues in 1960 (the other one, a year or so later, SHOCK MYSTERY TALES was an S&M-flavored "shudder" digest; a year earlier, there was at least one issue of SHOCK TALES, which also looked pretty slapdash...all three from different publishers and essentially unrelated).