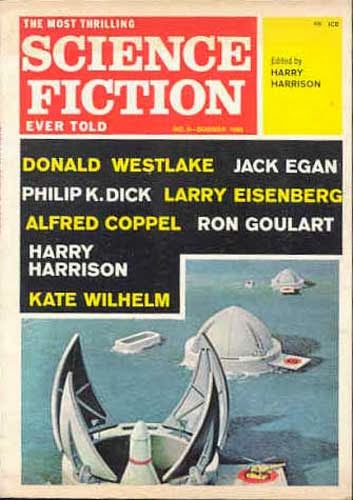 What ten books most influenced the list-makers, asks George Kelley? How about the ten
magazines?

1. Unknown pulp sf reprint magazine. One of my two earliest remembered reading experiences (story about an alien who could transmigrate consciousness...swap bodies...with the protag, who described how he suddenly was in a tentacled body...after all these years, I wonder if I'd honed in on one of the reprint stories in a late '60s Amazing), the other being an unknown DC science fictional comic. I read Seuss and easy-reader Grimm earlier, but these are the first I remember. This would've been in 1968-69. 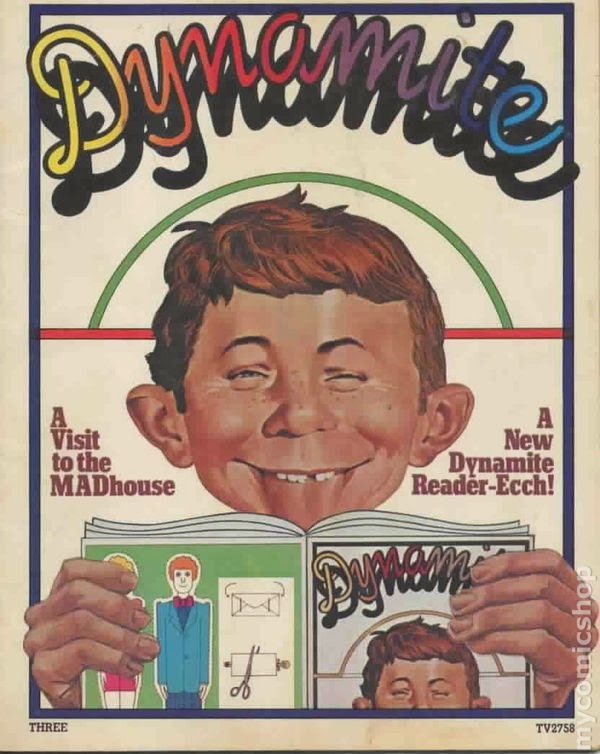 2. Children's Digest and Humpty Dumpty. Fascinating in their variety. Highlights, too.

3. Dynamite. The Scholastic Book Services magazine that was sheer charm and funny trivia. Runner up for this slot: Boy's Life.

4. Comics, particularly the horrors, and Mad. Particularly Weird War Tales from DC (and its militating against war); Tomb of Darkness from Marvel, Atlas/Timely reprints from the days they went head to head with EC's industry-shaking horrors; and the odd title such as Charlton's Ghost Manor and its early '70s importing of short ghost manga, or Gold Key's rather well-written Twilight Zone. Of course, the books collecting the Kurtzman Mad and its immediate aftermath were funnier than the current one, but the curent one was worth getting...ahead, in the middle '70s, of even National Lampoon (despite the sexy parts of NatLamp...but that's what stolen Playboys were for) given the relatively frequent recourse to the easy laugh in NL, to say nothing of the basic sadness of Cracked and Crazy...though DC's Plop! was gratifyingly weird. Not terribly funny, but interesting.

5. Fiction magazines. See approximately half the posts in this blog, including this one to a limited extent.

6. Playboy. Endlessly fascinating to the 9-13yo me, for all the obvious reasons coinciding oddly enough with puberty's onset, and perhaps the not so obvious...it almost, beyond the nudes, seemed to rival the generalist magazines for kids in the range of topics addressed, though even at nine it seemed odd to me that some of the pictorials showed fully-dressed men with naked women...wasn't he interested in the fun to be had? 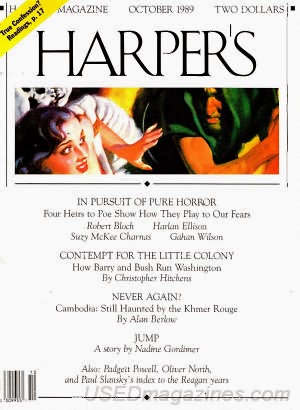 7. The Atlantic Monthly...now, finally, in 1978, I'd found a magazine that was the adult equivalent of Children's Digest or Highlights...just as eclectic. Pity it kept getting duller and duller as the years passed, almost as staid, finally, as Shawn's New Yorker...but, happily, Harper's, previously Atlantic's Brand X, remade itself into something even more interesting in 1984. 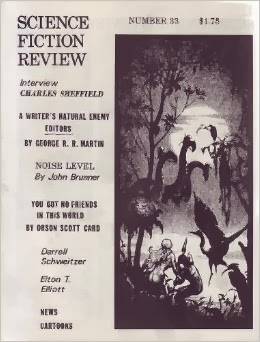 8. Science Fiction Review. The first important sf fanzine I read, soon followed by Algol in the process of becoming, briefly, Starship, the entrees to my first subculture, albeit I've remained essentially an amused fringefan throughout the years since. 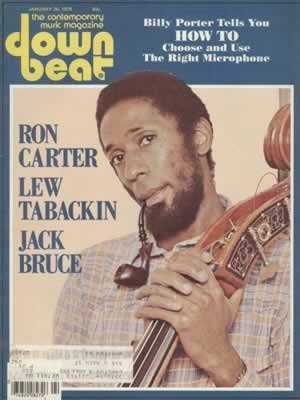 8. Downbeat. The first music magazine I read (ca. 1978), and it paved the way for the other interesting music magazines I would also pick up over the years. Now that I haven't read Rolling Stone regularly for a quarter century and haven't been keeping up with Maximum RockNRoll (which I also, if trivially, contributed to), I still pick up Downbeat and Jazz Times, and would Cadence if it was still with us [update: which it is!]. (Cadence and JT columnists were Far too kind to my jazz fanzine pretty obscure; jazz notes and unpopular culture in review...in part I think because they wanted to encourage the example.) 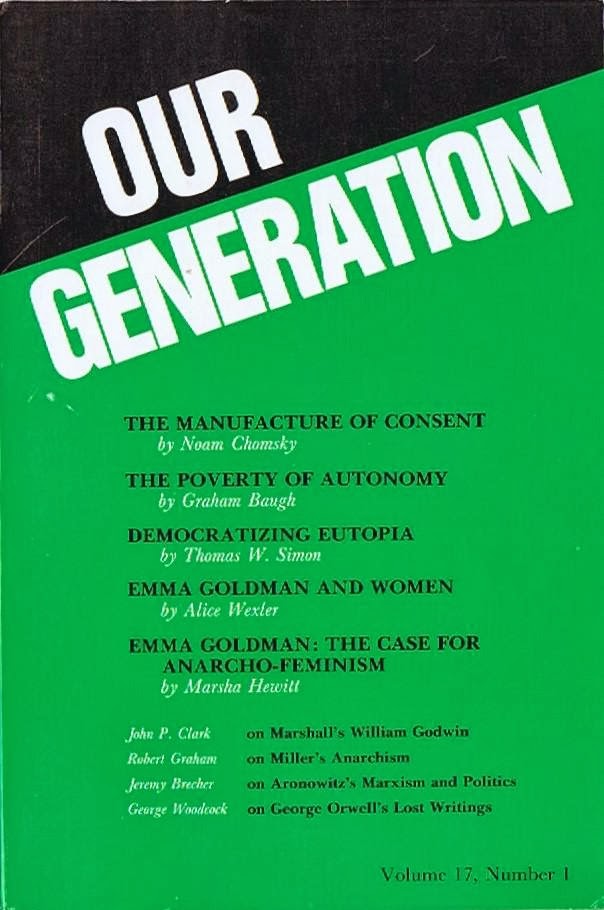 10. Our Generation. Even more than the rest of the anarchist press extant in the 1980s, ranging from the bitter one-man labor of printer's love The Match! through Fifth Estate through Social Anarchism (to which I would contribute; my brother provided a cover for that issue, a reprint from the front page of a collective magazine we put out with my ex and two other friends, (in*sit)) to Profane Existence (a long letter there from me was quoted in someone's PhD thesis that was published as a trade book, I learned on the same day I bought my first car...now there's a load of mixed emotions for you)...even more than all the others (Freedom and Anarchist Review from across the Atlantic...), the Canadian Our Generation spoke to me with its long contributions from Noam Chomsky, Murray Bookchin, Janet Biehl and others who were trying create a pragmatic libertarian socialism, and, where that wasn't going to happen, to not forget those who had come before, and what we might be able to do incrementally.

George Kelley got the books meme started in our little strand of the web, but Patti Abbott, as is her wont, put together the longest set of links to everyone's response she was aware of. K. A. Laity's link wasn't working on Patti's list when I checked, tho'.

MAD and PLAYBOY played a big part of my teenage years, too, Todd. My family was into magazines: SATURDAY EVENING POST, LIFE, TIME, READERS DIGEST, and THE NEW YORKER. Those days seem to be gone for good.

Well, perhaps...but all those titles have at least some sort of continuing existence as magazines as well as brands.

PLAYBOY was the magazine that gave a greater sense of the adult world than other magazines I perused at age 8 (except perhaps my mother's coupla issues of PLAYGIRL), but even then I could see how skewed a view of adulthood it presented.

PLAYBOY was far less compelling in my teen years as they advanced than it had been in earliest puberty, around 8 and 9 and up through 13 (my father didn't subscribe any longer, and the Moral Majority and allies were having greater success in those years in limiting its distribution). I had also started to note how plastic a lot of the models looked, despite how adorable some others were. Softcore films came into the house with cable television at this point, and the magazine, which was squeamish about certain aspects of women's bodies (!) was looking more and more quaint. A trend which hasn't ceased.