Friday's "Forgotten" Books: THE NIGHT BOOKMOBILE by Audrey Niffenegger, among the chapbooks it somewhat resembles... 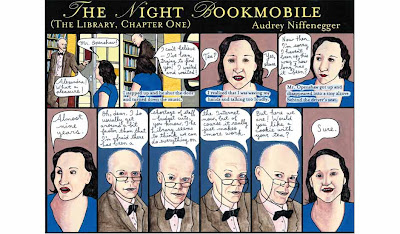 In 2004, Zoetrope All-Story (Francis Ford Coppola's fiction magazine) published a lovely fantasy short story by Audrey Niffenegger, just beginning to make a famous name for herself as a fiction writer with The Time Traveler's Wife. But Niffenegger had primarily engaged in visual artwork before begginnig to publish fiction, and The Guardian commissioned and ran a weekly-installment serialized graphic adaptation of the short story in 2008...which will soon be published in book form. Making the short story perhaps a "forgotten" text, though I hope it will be included in the volume, and the graphic format an "anticipated" book...

But that got me thinking about the other projects that published a single short story (or at least short fiction piece, on up to short novellas) in chapbook form, often (though not that often) even from mass-market paperback houses, such as John Cheever's nearly posthumous Oh What a Paradise It Seems and William Kotzwinkle's Swimmer in the Secret Sea and more recently the novella, not published in maas-market format but in the QP format which has essentially supplanted that for much of the publishing world, as well as in boards, Michael Chabon's brilliant Sherlock Holmes story The Final Solution (orignallly in one of the last George Plimpton issues of The Paris Review)(read and support Your Fiction Magazines...unpaid advt.).

And then there was this series, from the last years of the shortlived Pulphouse Press, in association with some guy named Gorman and his Mystery Scene assoicates--even at the still pretty good Borders chain as it existed then, we had troubles getting every release listed here:
Mystery Scene Press Short Story Paperbacks
($1.95 each in the early 1990s)

The People of the Peacock by Edward D. Hoch
Eight Mile and Dequindre by Loren D. Estleman
Lieutenant Harald and the Treasure Island Treasure & My Mother, My Daughter, Me by Margaret Maron
Cat's-Paw plus Incident in a Neighborhood Tavern by Bill Pronzini
Ride the Lightning by John Lutz
Afraid all the Time by Nancy Pickard
The Perfect Crime by Max Allan Collins
The Reason Why by Ed Gorman
Outlaw Blues by Teri White
My Heart Cries for You! by Bill Crider

--In any case, it's frequently a good artistic idea, and almost never a good commercial one, to publish short fiction in this format, when the stories can stand on their own and serve as a good introduction to the writer's work...I'm sorry I never saw Bill Crider's volume, in this series, for example.

And then there were the Tor Doubles of the 1990s, a resurgence of the Ace Doubles of yore...and the very shortlived series of Dell Binary Stars in the late '70s/early '80s...

Lots of people never saw that one, Todd.

I figured...did you ever see any print run figures?

This is news to me.