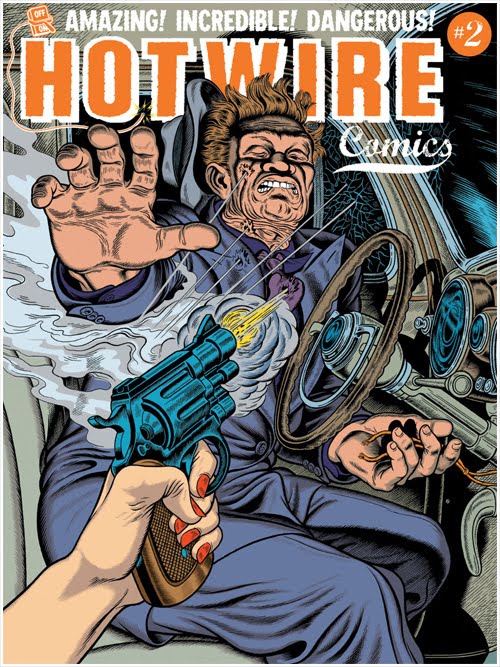 Fantagraphics is a comics company with a mission to further the art of comics, and to provide a home for artiness...built around the relatively serious magazine, now a periodical book, The Comics Journal, their first big commercial splash was thanks to the Hernandez brothers, Jaime and Gilbert and occasionally Mario, the writer/artists of Love and Rockets, running accounts of life today and in various points in the past of characters in and around Los Angeles and, in Gilbert's stories, in a small town in an unnamed Central American country apparently south of Mexico. But L&R hasn't been the only project, either of the Hernandezes nor of Fantagraphics, which latter has had considerable commercial success of late with their complete collections, an ongoing series, of Charles Schulz's newspaper strips (they'll be tackling Walt Kelly soon)...and the publisher has been a haven for alternative comics over the last couple of decades, publishing (however irregularly) a number of anthologies and single-creator titles out of the "underground" and "alternative" traditions of the 1960s onward...the Hernandezes are of this community, as are such folks as Roberta Gregory and Dan Clowes.

Which brings us to Hotwire (or at least this Hotwire, as opposed to, say, Warren Ellis's project of the same title), with the the slightly more sedate Mome the major anthology comics currently published by Fantagraphics, and both treated as periodical books rather than as newsstand magazines (times are tough, and the shelf-life of books is, of course, greater...and they are marginally less-wastefully distributed). The 2008, second volume of the (I believe) ongoing annual series of oversized anthologies (the magazine has roughly the dimensions of Life or Interview magazines) is about evenly split between color and black and white comics, and features a mix of relatively straightforward narrative and utterly impressionistic comics art. One of my old favorites, Mary Fleener, has an apparently autobiographical story involving a very bad trip involving PCP-laced pot ("Niacin")--as usually with Fleener, things get Very Cubist in her artwork as emotions run high and situations grow fraught. Editor Glenn Head (as to whether that's a nome di fumetti or whether these are legally Head comics is a question I haven't yet pursued) has a decent vignette from the intersecting lives of a stressed psychiatric patient and unhappy wife and the hardly happier Wilhelm Reich (and what befalls him, at least). It's quite a melange, including bits of hardboiled comics of the kind Fred Wertham wouldn't care for at all on over to those he might not be able to make hide nor hair of, including a rather blunt parody of Frank Miller, shown eating canned Mickey Spillane excrement for inspiration.

Joe Bob would definitely have you check it out, even if the indulgence of some of the more rococo post-underground tendencies can get a bit heavy here.

Amazing! Incredible! Dangerous! I love that kind of over the top rhetoric. Why does anyone use "comic book" as short hand for simplistic overblown stories? Oh, yeah. It's an uphill slog getting people to realise the wonderful work the medium can offer.

And Li'l Abner. I'm not sure they've finally finished what Kitchen Sink started with Krazy Kat, but I believe Fantagraphics has also done a fair sampling of Little Nemo.

Also, among my previous "forgotten" books is their collection of the first decade of Jules Feiffer VILLAGE VOICE strips, THE EXPLAINERS.