FFB: TOO MANY BOTTLES (aka THE PARTY WAS THE PAYOFF) by Elisabeth Sanxay Holding 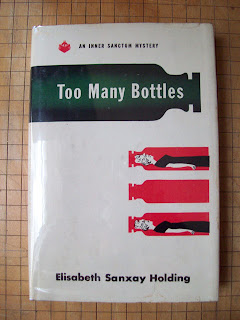 
A short, and relatively late, novel by Elisabeth Sanxay Holding, and one which plays to her strengths without showcasing any of them in their best light, except perhaps her casual wit and the smoothly readable pacing she brought to most of her work I've read (a fraction of her work in the crime-fiction field). A 1951 "Inner Sanctum" mystery, it mixes elements of the psychological suspense story she and Cornell Woolrich and Robert Bloch and Daphne Du Maurier and others were developing in the 1940s with some of the conventions of the drawing room mystery and even a touch of the police procedural, while mostly being from the perspective of a freelance writer, James Brophy, who has let his life get beyond his control. At least, he's been drifting along enough so that his social-butterfly wife and her sister, an increasingly shrill and dependent presence in the household, go through gyrations that lead to several murders...while he attempts to get some work done on one or another short story or serialized novel or novella (particularly one in progress called "The Party Was the Payoff"), with hopes of placing This one in a slick magazine rather than a pulp. Another woman catches his resigned eye, and she plays a significant role as well, at one point trying to fix him up with a job with an early 1950s version of Open University, an offer he dodges with a shudder and several quietly offputting suggestions to the Ms. Vanderbilt (but not of Those Vanderbilts) who runs the multi-disciplinary arts "school" for adults.

At 123 pages in the Mercury edition, with a decent but unexceptional George Salter cover painting, it's just a bit rushed, particularly around Brophy's realization of his own role in events, and the prime mover of most of the chaos is rather easy to spot, but it's in turns a funny and grim, and very quick, read. If you pick up one of the out of print editions or the current Stark House two-fer, you probably won't wish you were reading something else (though I wouldn't judge Holding's work as a whole by this one). ESH's influence on writers following her, from Patricia Highsmith to (her recent champion) Ed Gorman and beyond, was great...

The Mercury Mystery edition (a Dannay title change? Or ESH's title restored?), Mercury Press 1952, and as a Mercury Mystery, in undated digest-sized magazine format (at the end of its run, after Mercury Press sold EQMM to the new Davis Publications, Mercury would become a full-fledged fiction magazine, with each issue featuring a novel and short essays and fiction). 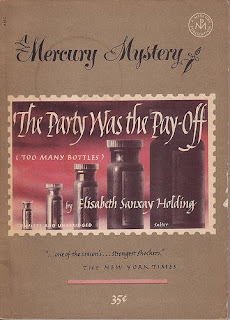 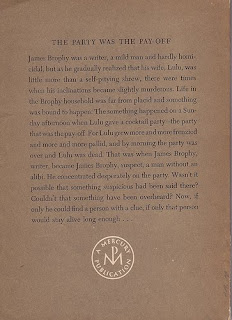 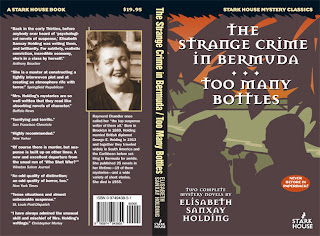 Elisabeth Sanxay Holding's mysteries showed up as ACE Doubles and I bought them. Now, after reading your enlightening review, I need to read them.

And after reading your enlightening review I don't need to read it.

George, I've missed her Ace editions, but she is certainly a good candidate for the Doubles treatment...

Rick, I suspect you might enjoy her more important work...

I got a 1951 Ace Double of The Innocent Mrs. Duff and The Virgin Huntress in my recent pulps finds in Winnipeg Beach, MB. Like George I guess I need to read it, but it will have to wait until I try some of the Gold Medals. At least it will now make my TBR stack.

Can't hurt! I haven't read those yet.

Not particularly. However, I have always been convinced that many of the cottages on Lake Winnipeg and some of our other large lakes (we have 100,000 lakes and Minnesota only claims 10,000) that have been owned for decades by the same family must have stacks of old paperbacks collecting dust. The cottage that my sister and I now co-own has been in our family for 45 years and many have been owned by the same family for much longer. Several years ago I placed some posters around the area for paperbacks as well as exhibit cards that were sold in arcades along the beach boardwalks. Think I got one or two calls. Over the years I have found a few pulps at yard sales, but no large quantities. The two large lots that I found in a bookstore this summer are by far my best find. I've kept around 115 books for myself.
Another 50 or so that I don't want are going to go to our Childrens' Hospital Book Market. The CHBM holds two paperback sales each year along with its major sale in April. At each sale, there are several tables devoted to 50 cent PBs (used to be 40 cent). I've found a few interesting books over the years, but at every sale I see two dealers who have large inventories of PBS filling grocery carts. Both dealers have been selling world-wide for years. The main CHBM sale used to attract dealers from the US Midwest as all several provinces, but in recent years the number of visiting dealers has dropped off.