However, all three have been haunting my memory...all made an impression, one way or another, in my early reading... 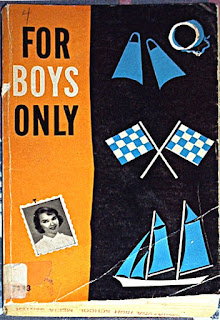 At the fine site, Vintage Scholastics, I finally found a reasonably good accounting of this anthology I read when I was eight or possibly nine, and have nearly zero memory of the contents...I barely remember the Asimov story, one of his more famous and one I'd encountered elsewhere, other than it involves, iirc, a sentient car...

DESCRIPTION:“Every story a trailblazer. Stories that shock and chill…and some that are just for laughs. Yarns of adventure and mystery…of yesterday, today, and tomorrow…of faraway places and for the girl around the corner. Read one and you’ll want to read them all!” (from the back cover)
CONTENTS:Introduction
The Adventure at the Toll Bridge by Howard PeaseA Good Clean-cut American Boy by Harlan WareFirst Command by Eugene BurdickThe Slip-Over Sweater  by Jesse StuartCaesar’s Wife’s Ear by Phyllis BottomeSally by Isaac AsimovOpen Sesame by Ray HarrisThe Torn Invitation by Norman KatkovHigh Diver by John AshworthAs the Eagle Kills by Hal G EvertsAlone in Shark Waters by John KruseThe Rookie Pitcher by John McKlellan
Nancy Faulkner:  Witches Brew (Curtis Books, 1973)

An utterly run-of-the-mill "gothic romance" of the sort that really caught fire commercially in the 1960s, including the line Terry Carr edited at Ace Books which featured actually interesting-looking titles from the likes of Joan Aiken (previously, I've run covers from other publishers' attempts to sell Northanger Abbey and Conjure Wife to supermarket gothic fans...Joanna Russ wrote what is the best essay about this kind of work I'm aware of, "Someone's Trying to Kill Me, and I Think It's My Husband").  Faulkner apparently wrote rather better children's books, as well...this one was the example I happened to pick up in a supermarket one day, in my 8yo horror-fiction-seeking missile days, and was sorely disappointed, but educated in that not everything that looked like horror fiction actually was...(Notable, perhaps, as a Curtis book in those rather bleak years for the old Curtis Publishing properties...Curtis Circulation distributed a number of fiction magazines and comics, the revived Saturday Evening Post and the Ladies Home Journal were in others' hands, and I assume the Perfect Film folks, who owned the distributing business, put out this line of paperbacks...)

As I noted last week about the earlier book below:

"Managing to dig out information on such somewhat enigmatic and/or influential books on my young reading as Eric Berger's anthology For Boys Only or Emile Schurmacher's Strange Unsolved Mysteries (and further discovering that this journeyman writer had a diverse if obscure career, writing paperback originals, men's sweat magazine articles and, earlier, for Collier's, as well as for the tv series Coronado 9--and, apparently, his daughter became a sort of small-time newspaper magnate)" 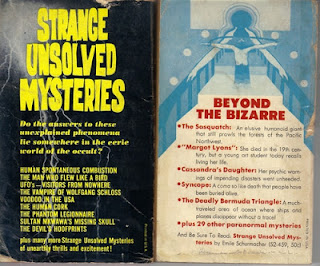 Schurmacher's book I read also looking for horror-content...even as a youngster, I was a skeptic about all matters supernatural, but that didn't stop me from being fascinated by all such matters in the arts, particularly the narrative arts (but also music and visuals)...the other thing that I remember clearly about Strange Unsolved Mysteries is that it was easily the most sexually explicit book I'd encountered to that point, though no doubt it would probably seem tame if I was to first encounter it today. That aspect, of course, was fascinating, as well.
Posted by Todd Mason at 1/26/2013 06:22:00 PM

At one time I had the Berger and both Schurmachers but they all went walkabout, as most of my books did back then.

I'm pretty sure the Howard Pease story was a Todd Moran, a teen-age hero that Scholastic seemed to push at every possible opportunity. Except for the Asimov, I can't remember the others from the Berger book.

That last might say something about the stories, since they haven't stuck with either of us (the clever title of the book might say something about Berger's acumen, too...but I suppose it might've drawn some of the more reading-resistant/dunderhead boys, and some of the more rebellious girls). I haven't actually picked up a copy again in four decades...of any of them.

Did you collect Schurmacher, or was it just the content of the "true-weird" books that made them worth picking up?

For a while, I picked up every true-weird book I could find. They seemed a logical extension of the Believe or Not! books I devoured in grade school and once I discovered Frank Edwards I was hooked on that laughable and fascinating genre. Even today, I will still pick up a true-weird book on occasion.

My first copy of CONJURE WIFE was a late '60s Award Books paperback with a Jeff Jones cover, very much in the paperback gothic mode; it might even have said "An Award Gothic" or words to that effect on the cover. Fortunately I knew who Leiber was. As for the "unsolved mysteries" books, I still have probably a dozen or so; my father worked with the late Frank Edwards when I was a kid, so we had all his books. I wasn't credulous enough to believe them for long, but the stories he told and the way he told them still fascinate me. And of course there were others--R. DeWitt Miller, Harold somebody who told some of the creepiest "true" tales I'd ever seen, and more.

Mike, that Jones-cover of CONJURE WIFE is on the link I have in the text of the post...it was indeed sold as a gothic by Award (and I hope no gothic fan was Too disappointed). Gents, I would go on to pick up a RIPLEY'S BION collection (but only one), and collections with titles such as STRANGE BUT TRUE AUTO RACING STORIES (and the similar BASEBALL volume), but that's about as far as I ever went with such things, beyond the issue or two of DC Comics' GHOSTS I bought. I found even the section of "true" ghost lore in THE HOUSE OF THE NIGHMARE anthology reviewed in an early FFB post here somewhat annoying, in that it took up space that could've been devoted to horror fiction not trying to pass itself off as fact...those John Canning volumes, which seem to be kept in print consistently or at least dusted off for instant remainders too frequently, and at least one extremely lurid (but not even sexy) British volume I found in a public library managed to put me off such things indefinitely...so far...wonder if that last was your Harold, Mike...

I think I missed Frank Edwards altogether...similarly, though, ONE STEP BEYOND's conceit helped diminish my enjoyment of that no-budget tv series (you'd think Alcoa could've afforded to throw them another buck an episode).

And I can't say I'm sorry I managed to forget Moran and probably otherwise miss Scholastic's attempts to franchise him altogether...