FFB: edited by Avram Davidson: THE MAGAZINE OF FANTASY AND SCIENCE FICTION January 1964 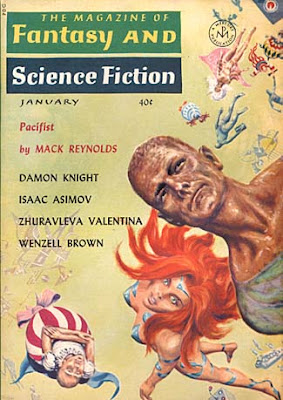 Donald Westlake, Mack Reynolds, Damon Knight, Edward Wellen, Allen Kim Lang's possibly best story, part of Fritz Leiber and Avram Davidson's longterm argument about the merits of H.P. Lovecraft's work...alongside Davidson and MZ Bradley reviewing some important and some  underappreciated (or even Forgotten) texts of fantastic fiction...so, what was so special about this issue?

The January 1964 issue of F&SF gets to be significant to, well, particularly me from the confluence of several notable contributions within (as well as having the cover date kicking off what would be Avram Davidson's last year of editorship, his being the best set of issues the magazine would see so far, the best from the magazine that has averaged the best among the long-running fantastic fiction magazines in English even in the face of strong competition for that plaudit)(and several of the best magazines in other languages were either launched as their national/language editions of F&SF or affiliated with the Yank magazine early on, notably the French Fiction and important Swedish, Japanese and Spanish magazines).

I've written previously about Mack Reynolds's cover story "Pacifist" being one of the stories that has helped shape my thinking about the world, posing the basic questions at the heart of utilitarianism as well as pacifism, rather neatly and with force and wit. At 13, bracing stuff. James Sallis thought so, too, when he, a bit older than I was at first reading, put together his fine first anthology, The War Book (1969), and it's one of the two Reynolds stories that newbie anthologist Martin Harry Greenberg and his collaborators used to bookend the contents of their Political Science Fiction (1974), not the last time Greenberg would reprint the story.

Donald Westlake's "Nackles" is a Christmas horror story, about an anti-Santa rather more dire than Krampus, published not long after Westlake's denunciation of the sf and fantasy publishing scene, hence the use of his little joke of a pseudonym, Curt Clark (Westlake would never be able to divorce himself from fantastic fiction, however frustrating he found the commercial realities there early on, as such late work as Humans demonstrates).  Another story with a kind of sneaking influence in the culture...CBS's refusal to film an adaptation for the revived The Twilight Zone led to Harlan Ellison's resignation from that series.

Allen Kim Lang has had what critic John Boston has termed a "stealth" career in sf and fantasy, most of his publications in the 1950s and '60s (Lang is still alive, but apparently hasn't published in quite some time); Algis Budrys praised his work, and the unflashy nature of it, particularly in his one published novel, Wild and Outside. Though "Thaw and Serve" is decidedly flashy, and in tone reminiscent of the nearly contemporaneous Anthony Burgess novel A Clockwork Orange and certainly anticipatory of the rather goofier film Demolition Man in its depiction of a thug awakened from cryogenic storage in a nearly utopian future. One of the many proto-New Wavish (or, as Boston has joked, in this case rather more punkish instead) stories that Davidson, like Cele Goldsmtih/Lalli, published in their magazines in the early '60s, it would not only have fit comfortably in Harlan Ellison's anthology Dangerous Visions a few years later but might even have had some influence on Ellison's "A Boy and His Dog"...this is another story that has stuck with me from early reading, as have the Westlake and the Reynolds.

The other stories have not been as memorable to me, and I should revisit them.  Though Damon Knight would not write a fully satisfying novel till his rather late CV, despite his brilliance in all shorter forms, there was always something interesting about the earlier attempts. Edward Wellen, like Davidson, Westlake and to some extent Reynolds (and a lesser extent yet Wenzell Brown) an amphibian between crime fiction and fantastic fiction, and fond of doing work that sat firmly on the boderlines between both, has been reviewed here previously (a later contribution to the magazine, in fact); Robert Lory would be particularly productive in writing sequels of sorts to Dracula and other horror work, in novel series and otherwise, in the 1970s. Valentina Zhuravlyova not only wrote sf on her own but also, to get around the anti-Jewish bigotry of some aspects of the Soviet publishing sector, lent her name to her husband's fiction for publication (at least at home)...G.S. Altschuller is better remembered now for his formulation of the metatechnological observations known as TRIZ , or TIPS.

And the wittily, even offhandedly erudite book reviews by editor Davidson are supplemented in this issue by those of Marion Zimmer Bradley, not yet quite the institution she would become, and Fritz Leiber, in part engaging in a casual but heartfelt debate with Davidson over the merits of not just the interests H. P. Lovecraft pursued in his fiction, but in the qualities of the fiction itself (Davidson remained unconvinced...both Davidson and Leiber are vastly better and more profound writers than HPL was able to be, despite Lovecraft's extraordinarily important work in exploring existential horror, and his direct mentoring of the young Robert Bloch and, much more briefly but tellingly, Fritz Leiber as well in the latter's fledgling career as a writer).  And, of course, Asimov's science essay, of which he published, all told, 399 in consecutive issues of F&SF, and which column he credited as being the bedrock of his pop-science (and extensions) nonfiction-writing career (though Asimov and Davidson had a somewhat cool relation; Davidson's humanistic Orthodoxy and Asimov's utter atheism while being of Jewish ancestry was one source of occasional tension).

And, to add to the personal if not so much the intrinsic value of this rather impressive issue, it would've been the one on the newsstands at about the time I was being conceived.

That noted, please see Patti Abbott's blog for more of today's books (and possibly a few more magazine issues or other not-quite-books)...this week's entry by Jerry House is a review of The Eureka Years:  Boucher and McComas's Magazine of Fantasy and Science Fiction 1949-1954, edited by Annette Peltz McComas, about the origins of the magazine and its first five years of publication (and collecting some impressive stories published in those issues, among much else).
Posted by Todd Mason at 8/23/2013 07:56:00 AM

An extraordinary post Todd - it'll take me all weekend just to check out the links alone! Thanks so much for sharing your love and enthusaism for these writers and their work and provide so much contextualisation - it can be so hard to properly represent the genuine power and sense of wonmderment that discovering such works at the right age can inspire - wonderful to be able to have some of that brought back - and the deadly nackles saga, indeed! Thanks again Todd - bliss.

Far too kind, Sergio...but I'm flattered and glad if it has given some amusement and illumination!

I'm with Sergio: a brilliant post! I love the cover, I love the stories, and I love Avram Davidson's editing of such a great issues! I'm a big fan of Mack Reynolds, too. I need to read more of his work!

I think it was Budrys who once suggested that Reynolds was too often writing too quickly with a searching intelligence that struck the incautious reader as being Against Everything, as opposed to being For Common Sense (and his own leftist-libertarian perspectives). So, some of the work could've used a bit more time in the oven...but so much is at very least good fun, and the best is very good indeed.

Certainly better than my post, and thanks to you, as well, for overpraise of my effort, but a reasonable measure of Davidson's, et al.

I'm always eager to read a review of a magazine in my collection. I dug out my copy which I bought on the newsstand. I'll reread some of it with your comments in mind. Hard to believe it's been almost 50 years since I bought it!

The Westlake story sounds intriguing. Maybe every mall should have a Nackles, too.

I had a good friend who vowed to cancel his subscription to F&SF and never read another copy when he discovered that Davidson had left the magazine. A bit drastic, perhaps, but Davidson was such a good editor that it was hard to conceive that the magazine would not go downhill. It, of course, did not go downhill; both Josph and Ed Ferman continued the legacy left by Davidson, Robert Mills, Tony Boucher, and Mick McComas. (Although Ed Ferman did begin using some atrocious cover paintings by Ron Walotsky -- for which I have not forgiven him.)

Yes, Walotsky, while not the worst painter ever used by F&SF, was the worst who was regularly employed. (My favorite correspondence taking the opposite tack came from not-yet D&D guy Gary Gygax, who damned Davidson for ruining the magazine.) And, fwiw, Joseph Ferman never actually edited the magazine, so much as took the title briefly so that he would be blamed if they found his son was in over his head...the Real Pen went from Davidson's hand to Edward Ferman's. I would say that KK Rusch and then Mills were probably the least of F&SF's editors, so far, and they weren't Too shabby (for whatever reason, Mills seemed to do a better job at VENTURE before that one was folded into the elder magazine and Mills moved over). Ferman's F&SF was nearly as good, but not quite as risk-taking as Davidson's.

Kelly--at the link, you can read "Nackles"...Nackles wouldn't further sales very much. But you'd better watch out.

Indeed, Walker...hard for me to believe most days that I'm pushing a half century, till I begin inventorying my middle-aged ailments...hope it's a pleasant revisitation!

You know how much I admire your astonishing range of knowledge and your extremely readable writing style...well you outdid yourself with this one. I was transported back to the news stand on the day I bought this issues. Didn't "Nackles" become a TV episode? Great stuff, Todd.

I feel a great weight of blood rushing to an already fat head, Ed...thanks. "Nackles" was adapted by Harlan Ellison, in his capacity as consultant/all but script editor at the CBS revival of THE TWILIGHT ZONE, but CBS, which was the producing entity as well as network for the latter '80s series (for the first season, anyway...they shunted it over to CBS syndication for the second season) decided they didn't want to Krampus anyone's Xmas spirit, either, which certainly cramped Ellison's style, and he walked. The script has been published...and I thought, too, at one time, I'd actually seen a production, but instead was presumably thinking of reading the script.

Nope--CBS managed to run two seasons of THE TWILIGHT ZONE revival on the network, and then produced more episodes for a syndication package. (The utterly atrocious later UPN series, with a[n understandably] mildly annoyed-seeming Forest Whitaker as host, was a much later development.)

Ellison wrote about 'The Deadly Nackles Saga' in his SLIPPAGE collection. The 'third season' new TWILIGHT ZONE syndication episodes are actually, on recent inspection, much better than anticipated - shot in the same bland 80s style certainly, but many of the scripts and guest actors are great. A lot of this down to the hard work of J. Michael Straczynski, who was the main writer (11 out of 30 I think) as well as story editor on this last iteration of the show - and he did get Ellison to do at least one, "Crazy as a Soup Sandwich".

Correct on all counts, Sergio...and as bland as the CBS TZ revival could be, it was so vastly better than the aggressively inept UPN revival of the 2000s...