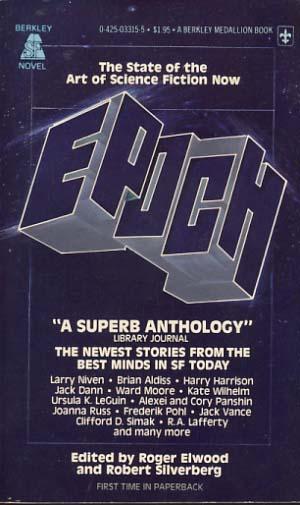 This, my review of Jack Vance's short novel/long novella The Dogtown Tourist Agency, first published in the bugcrushing all-original-publication anthology Epoch, edited by Robert Silverberg and Roger Elwood (subtitled, modestly, "The State of the Art of Science Fiction Now") will be delayed to later today, as I'm feeling a bit under the weather. It is notable that Epoch was Berkley Books's attempt to do just that, offer an expensively-budgeted all-original anthology to stand with anyone's, including such relatively rare commercial successes as the Star Science Fiction series edited by Frederik Pohl (Ballantine, 1950s) and its less-sustained heir of sorts, Stellar Science Fiction (edited by Judy-Lynn Benjamin/Del Rey, for Ballantine, then Ballantine/Del Rey Books, 1970s) or Dangerous Visions edited by Harlan Ellison (Doubleday, 1967) after an Ellison-commissioned similar project to be edited by Judith Merril had fizzled while Ellison was editing at Regency Books. 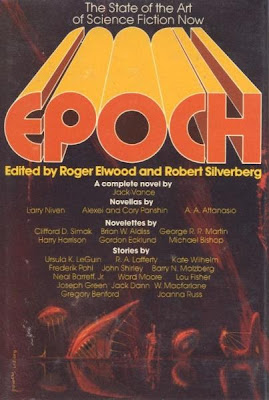 Robert Silverberg, during the most artistically "hot" period of his life as a writer, and most prolific period as anthologist for adult and younger readers, and Roger Elwood, the controversial and hugely prolific anthologist (infamous in sf circles for his conservative Christian opinions and relative nonchalance about the quality of the work he would publish, while usually querying work from good writers for his original anthologies and often depending on his co-editors to exercise most of the literary judgment about what was going into original or reprint anthologies) were given the contract to produce the Big Book for Berkley, which was also one of the first books (iinm) to be published after the merger of the paperback line with G.P. Putnam, as a Berkley/Putnam hardcover. The SF Book Club and, of course, Berkley's originals line Medallion did reprint editions, and that latter was how I first saw and read the volume in early 1977, when my father had purchased it for himself (probably not least because it leads off with the first appearance of Larry Niven's novella "ARM" and he was a Niven fanatic up until about that point of Niven's career). It was also the first time I would see the name of my friend A. A. Attanasio in print (and it was close to his first sale). 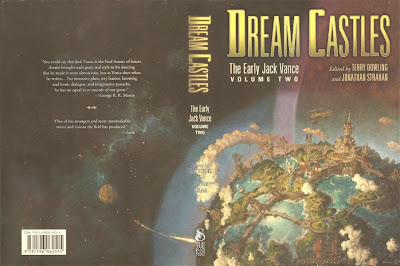 For some reason as yet unknown to me, this solid example of Vance's voluptuous color sense, knack for sketching convincing alien culture and keen sardonic wit has been republished in, among other collections, the second volume of The Early Jack Vance, which leads me to wonder if this first Miro Hetzel story had been sitting in Vance's drawer before he dusted it off and sent it along to Silverberg and Elwood (or if it simply struck the editors of The Early Vance as in the spirit of Vance's early work for Planet Stories and Startling Stories magazines, which it is)...why that would be the case, I'm unsure, as it is while not the absolute essence of Vance's art that the likes of the Dying Earth and arguably the Lyonesse sequences of books, or his early award winners, have been, they are still Vance hitting on all cylinders. The ISFDB index to Epoch (the hardcover and book club editions, with different pagination for the paperback, unsurpisingly)
Please see BV Lawson's blog for more of today's (Vance week) books...Patti Abbott is on assignment.
Posted by Todd Mason at 8/09/2013 11:23:00 AM

Great stuff, Todd! Are any of Jack Vance's early stories available online? I have, of course, spied his full length novels on a couple of sites though I haven't downloaded any as yet. Vance is a first for me and today I'm the odd man out.

Yes, in fact, some of Vance's early work (and even some later) is free online and detailed at Jerry House's post for today:
http://jerryshouseofeverything.blogspot.com/2013/08/forgotten-books-searching-for-jack-vance.html

Thanks, Todd. I visited Jerry's blog earlier and did see the various links to Vance's stories. It's interesting to see how so many bloggers are reacting to the author's work. There's something new in each of the posts.

Yes, though it's a pity that so many have so little context for Vance and his work...and a few are coming across minor work or work that simply wouldn't please them as much as other work would...

An excellent choice of Jack Vance's vast output. I remember reading EPOCH long ago. It was an uneven collection of stories. But "The Dogtown Tourist Agency" stood out by being terrific!

Any volume with the Panshins included is almost required to be uneven (to say nothing of most Elwood anthologies), but my mostly dim memories of the stories here are mostly positive...I should go ahead and review the whole book, of course.

Thanks for dropping by my blog, and for all the fun comments. I've subscribed, and I look forward to catching up with yours.