I started with Ross Macdonald with a story or so in one or another of the Alfred Hitchcock Presents: anthologies, and eventually went onto what many of his readers might suggest was the wrong starting point with his novels, the late The Blue Hammer (however, it's still a solid novel, better than the comparable late work of even such similarly impressive peers as Hammett, MacDonald or certainly Chandler). So perhaps that colors how much I enjoy the short stories he wrote in the Archer series, of which Lew Archer, Private Investigator, in a secondhand copy of the Detective Book Club omnibus, was my first sustained dose. So good, in fact, that I didn't manage to get around to reading the two novels also included so far, even though I'm a John Ball fan and like what little I've read of Lillian O'Donnell.

"Find the Woman"; "Gone Girl"; "The Bearded Lady"; "The Suicide"; "Guilt-Edged Blonde"; "The Sinister Habit"; "Wild Goose Chase"; "Midnight Blue"; "Sleeping Dog"...while The Archer Files gathers all (we know) including the (previously) lost stories, and The Name is Archer (Prashant Trikannad's choice this week) is an earlier collection that overlaps heavily with this one, I don't feel at all disadvantaged at having read this collection (particularly with its two companions) in the dollar or so purchase of the cheaply bound and printed DBC volume...the DBC itself almost worthy of FFB treatment, some decades after its folding, and probably as obscure to most of today's readers as the crime-fiction magazines it so regularly advertised in (despite the magazines mostly continuing, albeit with ever-smaller circulations).

As those with fresher memories of their chosen volumes will remind you at Patti's links and on-page reviews, Macdonald (actually Kenneth Millar) wrote elaborate mysteries with a dogged detective who was less stoic than Hammett's tended to be, less cartoonishly wise-ass than Chandler's, and certainly more human than entirely too many of his peers...things weren't going to go well, but Macdonald's Archer wasn't quite as much trapped in a nihilist world as most of the 1950s/60s hb detectives, particularly inside his own head, and that resistance to utter despair, without Macdonald resorting in Archer to the sort of super-anti-hero that, say, Travis McGee or Mike Shayne, much less Mike Hammer or Burke, became in the stories of others.

It helps. Literarily and otherwise. 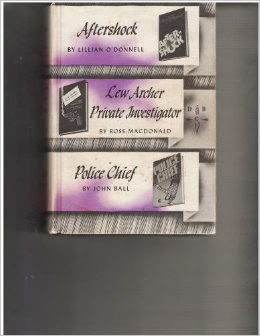 And here's an apparently uncollected Kenneth Millar short story, from the January 1948 issue of The American Mercury, "The Sky Hook" (courtesy a citation by Terry Zobeck).

I've never read any of the Lew Archer shorties, Todd. Never realized he had a bunch out there waiting for me. I'm not a short story reader normally, but I don't seem to mind the mystery ones. I'm going to check the library and see if they have any - they had a nice selection of the novels so they might.
Enjoyed your post, kiddo. Been missing the weekly movies list. Though I've tried to keep up with postings. (Minus this past week.)
Hope all is well.

I think Ross Macdonald was a better novelist than short story writer, but they're still worth reading. My main quibble with many of Ross Macdonald's works are the jarring interjections of literature into a private eye novel. In THE FAR SIDE OF THE DOLLAR a sudden conversation about KING LEAR suddenly appears in a dramatic conversation. It happens in other Lew Archer books, too.

Thanks, Yvette...and back at you. I've never quite understood why anyone doesn't like short stories, but it's certainly common enough these years...your library should certainly have at least one of the Archer collections...

George, I like his short stories as much as his novels, in part because the intricacy of some of the plots seems to me to have exhausted him in at least some of the longer works...and, really, private eye stories Are literature, after all...not divorced from the rest of the literary world, however much some writers might seem to think so...or write so...

Todd, thanks very much for mentioning my Ross Macdonald post. I enjoyed reading his short stories and look forward to reading some of the novels. I'm comfortable with both. I also read a few short stories every month. These I like to read in vintage magazines and anthologies.

While I'm not quite familiar with Chandler's and Hammett's detectives, Lew Archer does seem more human than Philip Marlowe and Sam Spade, not to mention Spillane's Mike Hammer, but on par with John Ball's Virgil Tibbs. In the stories I read Archer's humaneness reflects in his just being around people he is dealing with. There is no real outward show of sympathy. He takes things as they come (or happen) which appears to be a hallmark of the hardboiled detective.

"Gone Girl" is the revised title of "The Imaginary Blonde", which I covered in my entry. I'm definitely going to tackle more of the short stories.

Thanks for this Todd - certainly has made me look again at his shorter Archer fictions (fix-ups and non) as I have looked far less often at these over the decades. Hammett is probably the only one of them whose shorts are by some held to be superior to the novels but it's all good stuff and more or less canonical - thanks chum