Three volumes published during the US "horror boom" of the 1980s and earliest '90s...two rather heavily overlapping sets of interviews with writers of horror prose (and, for the most part, also horror drama) that both manage to include one (1) woman writer each (and both the women not so much "insiders" in the horror community as most of the men are), and a collection of essays and such by horror prose (and drama) folks about the films they like, love and loathe. 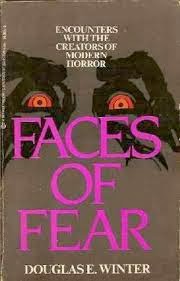 Berkley Books got into the business of publishing interview/profile collections of writers no later than 1980, with the first volume of Charles Platt's Dream Makers, interview-essays with a variety of sf writers (Platt also had a profound lack of women writers in both Volume 1 and to a lesser extent in V. 2, for, he claimed, women wrote fantasy rather than sf on balance...but, as far as Douglas Winter and Stanley Wiater were concerned, they weren't notably producing too much horror among the fantasy fiction, either).  So, they were ready, by 1985, for Douglas Winter's Faces of Fear, a rather similar collection of interview-based profiles of horrorists that even followed the model of attempting to interview each writer in his (usually) domicile, and making a cross-country trip to do so (thus grouping the interviews roughly geographically). (Over a decade later, Berkley would also take Ed Gorman and M. H. Greenberg's rather similar collections of interviews with crime-fiction writers...Stephen King is the only subject/writer in all of the cited projects so far, and in Wiater's similar volume). Winter's approach isn't too different from Platt's in tone, as well...mostly collegial, at times a bit challenging (if less aggressively so than Platt could be), and despite omitting such candidates as Joan Aiken, Joanna Russ, Janet Fox, Octavia Butler, Lisa Tuttle, Patricia Highsmith, Margaret St. Clair or, among the men, Fritz Leiber and Manly Wade Wellman (also missing from the Wiater) does manage to get an interestingly wide set of participants, from such relatively important but still fringes-of-horror figures as William Peter Blatty and David Morrell and, in the one interview conducted with a woman, takes a relatively rare session with the now late Virginia/V. C. Andrews (an interview that Megan Abbott and Sara Gran would draw upon for an essay about the appeal of Andrews's work for The Believer magazine some years later). Solid work, that one only wishes had been followed by sequels...though in a sense, the Wiater could be seen as one...

Courtesy Locus:
Faces of Fear: Encounters with the Creators of Modern Horror Douglas E. Winter (Pan 0-330-31246-4, Jul ’90, £3.99, 334pp, pb, cover by Dave McKean) Reprint (Berkley 1985) collection of interviews with horror writers, together with a section on shops selling horror fiction and lists of the best horror films and books. These latter sections (at least) have been revised for this edition. 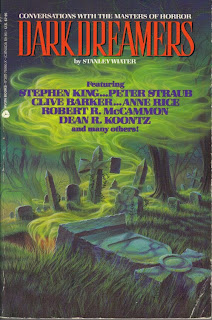 Stanley Wiater's book, first published in 1990, features shorter interviews with more writers...and still manages to include only Anne Rice, another bestselling but not all that good writer of horror, among the men, while ignoring Kate Wilhelm, Angela Carter, Joyce Carol Oates, Chelsea Quinn Yarbro and all others who at least occasionally but vitally contributed to the horror literature...and a number of the same writers, somewhat unsurprisingly, who appeared in Winter's volume reappear here (a double-handful), while still somewhat oddly missing Leiber, among others. (Wiater's book does include such important folk as John Saul, Dean Koontz, and the actually good John Farris, as well as the then still up and coming Joe R. Lansdale and Robert McCammon and "insiders" such as Les Daniels and Graham Masterson, all missing from Winter's lineup.) Interestingly, and more famously at least in some cirucles, this volume was followed by a television series a decade later in which Wiater was able to interview on-camera a number of these people and a rather diverse lot of others, leading to a second (and, Ron Clinton tells us in comments, otherwise unrelated) book of the same title in 2001 from Cemetery Dance Press:

Meanwhile, Christopher Golden's anthology is a solid commercial idea but not altogether the most satisfying read in execution, as many of the writers took their task here more or less seriously than others...and sometimes the more breezy, such as Wiater's survey of the most disturbing films, traditional horror and otherwise, he's aware of, are more effective than the more seriously-intended, such as Paul Sammon's study of David Lynch's then-recent (for this 1992 book) films. Nonetheless, it's an amusing book to poke around in...rather as with a given issue of the often horror-fiction-writer-laden Video Watchdog magazine...and, lo!, a small slew of women writers were asked to contribute, including Yarbro, the late Melissa Mia Hall, Nancy A. Collins, Kathryn Ptacek and Katherine Ramsland...along with Lansdale, Ed Gorman, and the recently late Philip Nutman (but, oddly, no Kim Newman).  Both the first Wiater volume and Cut! won the Bram Stoker Awards from the Horror Writers Association for best nonfiction book of their years.

I don't suppose I ever thought of Octavia Butler as a horror writer, though she is one of my favorites.

Consider KINDRED for a second. If it isn't horror, there hasn't been a horror novel so far.

The CD book of the same name (DARK DREAMERS) didn't have anything to do with Waiter's collection of interviews. Instead, it was a coffee-table-sized photography book with a bit of text accompanying each photo. It's an interesting book, but nowhere near as fascinating or informative as the Winter and Wiater books of interviews.

Ah! Good to know. I took a rather quick look at that citation, and assumed it was keyed to the video interview series, in turn spun off from the first book.

You're right about KINDRED. I was so busy thinking of it as sci-fi that I was overlooking how terrifying it is. Is it CLAY'S ARK that has the virus? I suppose that one qualifies, too.

And in KINDRED, unlike most of her later works, there is no attempt (unless I'm managing to forget them) at science-fictional explanation of the personality switches through time. It's akin to a haunting, and to damnation.

SF can be horrific w/o actually being horror, but KINDRED is straightforward fantasy about the same kind of real-life horror that SEVEN YEARS A SLAVE is...and probably more powerful than the film adaptation, at least (I haven't read nor seen SEVEN yet).